A Question Only Elon Musk Can Answer 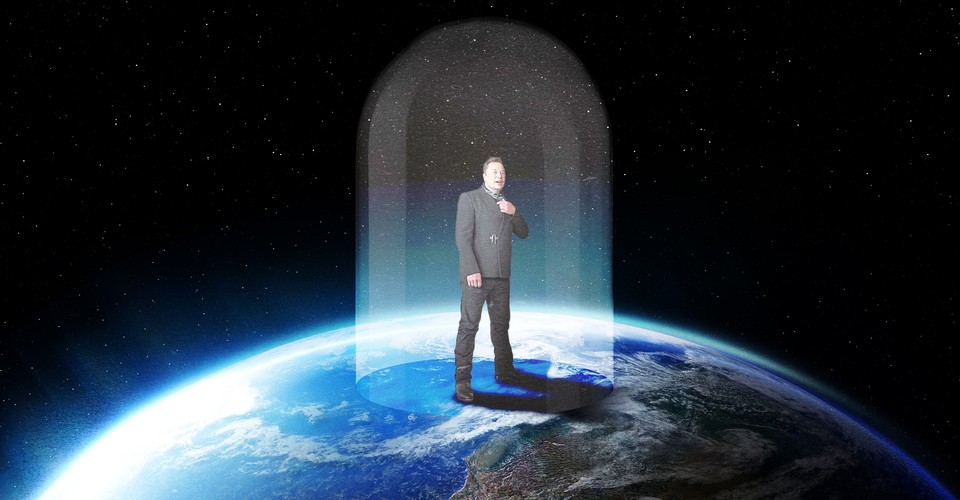 On the day that SpaceX’s first space tourists launched, Elon Musk was there at Kennedy Space Center, in Florida, to see them off, cheering as the private astronauts walked to the Teslas that would take them to suit up. And after they landed safely, having orbited Earth about 45 times, Musk was there again to congratulate them in person.

The Inspiration4 mission marked SpaceX’s fourth successful human spaceflight, and a SpaceX official says the company wants to fly paying customers “three, four, five, six times a year at least.” In this era’s space race among private companies, Musk’s SpaceX pulled ahead on essentially every measure but one—giving the CEO a lift above the atmosphere. Branson did it, Bezos did it—so why hasn’t Musk himself flown yet?

He is, after all, the only person in the world who could, if he really wanted to, fly his own rocket into orbit. He could spend an entire week on the Dragon capsule, just taking in the views. And he could really show up the other space billionaires.

Musk did put down a deposit for a future trip on Branson’s Virgin Galactic, but, like Bezos’s Blue Origin, the company offers only suborbital flights. (And Blue Origin has argued that Virgin Galactic’s trips don’t really count, because Blue Origin goes higher.) Flying on SpaceX’s Dragon capsule, Musk could call himself an astronaut, no question. Surely his staff could quickly whip up a spacesuit in his size, and Musk isn’t known to be risk-averse; in 2015, he stood upright atop a flying plane in a stunt called a “wing walk.” And yet the summer of space billionaires has come and gone, and Musk has remained firmly on Earth.

Only Musk knows why he hasn’t gone to space, and he’s a hard person to reach. SpaceX did not respond to a request for comment, and Musk has not acknowledged a question I posed on Twitter, where he sometimes responds directly to reporters.

But Garrett Reisman, a retired NASA astronaut and an engineering professor at the University of Southern California, shared with me an anecdote that offers a hint of an explanation. Reisman is a senior adviser to SpaceX, where he previously worked on the company’s program to transport NASA astronauts. Early on, Reisman met with Musk to discuss some specifics about future crewed flights. Boeing, which was developing its own system with NASA’s help, had decided that its first test flight would carry one NASA astronaut and one astronaut employed by Boeing. (That flight has yet to happen because of hardware and software issues.) Reisman said that a similar arrangement “could be good for morale” at SpaceX: The chance to become a company astronaut would surely energize the workforce. “And he looked right at me and he said, ‘Why would anyone want to go to low-Earth orbit?’”

“I’m sure he would have a great time,” Reisman told me. But what Reisman took from that exchange was that Musk doesn’t find it so impressive to reach low-Earth orbit, where hundreds of satellites, the International Space Station, and most astronauts who have been to space have spent their time. Musk certainly understands the stakes, and he wants SpaceX to do spaceflight well. After the first astronauts to test-drive the Dragon came home last year—beating Boeing to the milestone—Musk said that he’s not “very religious, but I prayed for this one.” But he has always been focused on the moon, and on Mars. In Musk’s mind, humanity should already have a base on the lunar surface, and he founded SpaceX two decades ago because he was aghast at NASA’s lack of progress on a Mars mission. Musk’s goal remains reaching and building a city on Mars, and, as he says often, “making life multiplanetary.”

Reisman said that if launching on Dragon’s next flight would mean moving closer to that future, Musk would do it. “He’s not only interested in the thrill of it,” Reisman said. Musk has said in the past that he does intend to fly on a Dragon one day. But it might be more his style to choose a journey that signifies a major step in human expansion into space. A few former SpaceX employees I spoke with suggested that Musk might board one of the first crewed flights of Starship, the spacecraft that SpaceX is developing to reach the moon and Mars. That would certainly be a bit more momentous.

Unlike Bezos and Branson, Musk doesn’t have something urgent to prove about the capability of his rockets and capsules. SpaceX is one of the most reliable spaceflight companies in the world, and its Falcon 9 rocket is considered an industry workhorse. Bezos wanted to prove that if Blue Origin was safe for him, it would be safe for his customers, but Musk has already demonstrated SpaceX’s safety with the launch of professional astronauts. Nor is Musk the showman that Branson has always been and Bezos has become—he is likelier than not to go off on jargon-laden tangents about rocket engines.

Plus, Musk still has too much business here on Earth. On Monday, soon after meeting with the Inspiration4 crew in Florida, he hopped back into his private jet and returned to South Texas, where engineers and technicians are working nonstop on Starship. Musk wants to launch a prototype into orbit as soon as the end of this year. At the same time, Musk is pushing electric-car development at his other beloved company, Tesla. Unlike SpaceX, Tesla is a publicly traded company with a board of directors. And while Musk hasn’t been the best-behaved CEO, space travel would reach a whole new level of going rogue. Bezos stepped down from his role as Amazon CEO days before his flight this summer, and though he told CNN that he “could have done this flight as CEO of Amazon and it would have been fine,” there was still some speculation that his suborbital trip was deemed too risky for someone in his position. An orbital spaceflight is a different story, with many more risks. I spoke with several former SpaceX employees for this story, and they suspect that Musk probably won’t fly to space until he feels that Tesla and SpaceX can do without his personal contributions. Although SpaceX’s crewed missions so far have gone beautifully, the work is still dangerous—rockets can explode, after all—and Musk may have calculated that the hazards, however small, outweigh any potential benefits.

Even if SpaceX reaches Mars in his lifetime, Musk probably won’t be one of the first people on the surface. He has said that he’d “like to die on Mars, just not on impact,” and the first visits will be the riskiest. And it’s hard to imagine Musk, who is known for his outrageously long workweeks, retiring from his other pursuits—or even taking a week-long vacay in low-Earth orbit. If he stays behind long enough, the person who might profoundly reshape humankind’s presence in space might not make it there himself.

But you never know with Musk. “He can announce tomorrow that he’s going to hop on the next Dragon and go to the space station,” Reisman said. “Who knows? I’ve given up on trying to predict exactly what Elon is going to do a long time ago.”