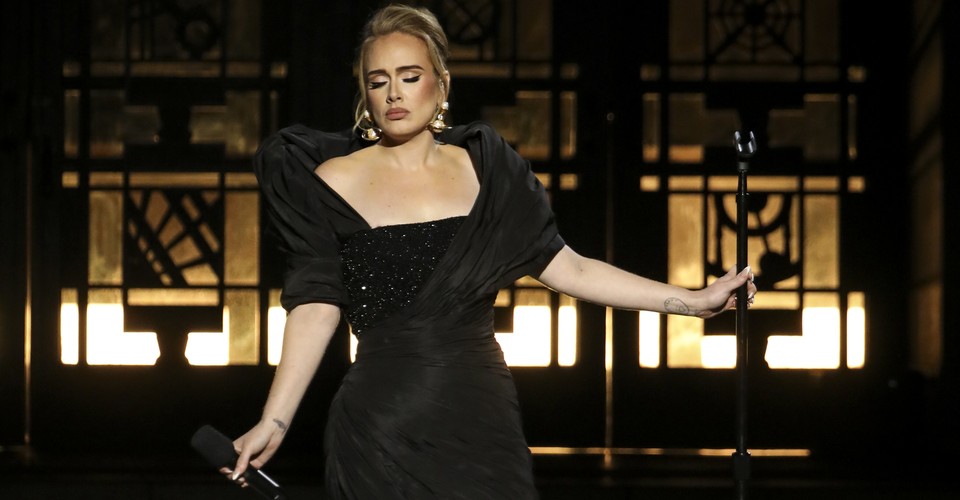 No one broke Adele’s heart this time. Until now, her music has centered on the brutality of romantic rejection—the way it can throw a human soul against a wall, snapping bones that never heal right, instilling a kind of existential PTSD. Yet, though her new album is about “divorce, babe, divorce,” betrayal, cruelty, and nasty rumors are for once not part of the story. According to Adele’s interviews and lyrics, her marriage to Simon Konecki ended because, eight years into their relationship, she realized she was missing something important: happiness. So she walked out.

Whenever she has discussed 30, Adele has emphasized the deliberation that went into that decision. She acted only after consulting her best friends and her astrological chart, and she worked to minimize damage (her ex still lives across the street from Adele and their son; they’re on good terms). Yet what’s also clear is that she made the leap, fundamentally, because of something internal. Feelings propelled her to act, just as they propel her traffic-stopping vocal performances.

Passion plus control—this equation has always been part of the Adele experience. Her hits compress the bitter elements of her life into mass-consumed morsels, as if she’s a chocolatier working with only the darkest product. For 30, the control is greater, and the passions more complex. In a showcase of mastery, Adele holds the listener’s hand and leads them down a path, her path, one that begins gently but eventually narrows against terrifying cliffs with a boiling sea below. She is doing something pop stars don’t often try to do—taking risks to teach bravery.

Only now is it clear just what a statement the lead single, “Easy on Me,” represented. It first scanned as just another piano-and-voice anthem in her arsenal, and it has, like a number of those, dominated on the Billboard Hot 100. But, really, the song is a spectacle of softness. In place of the dark thrill of “Rolling in the Deep” or “Hello,” it emanates spring-day warmth; Adele’s voice works more like a fluttering ribbon than a cannonball. Compared with her previous work, too, the lyrics tell of a power shift. She pleads for understanding as she admits to giving up—the declaration not of someone who has been wronged, but of someone who might be seen as wronging others.

The rest of the album does not sound like “Easy on Me,” but it does similarly aim for dignified, hummable experimentation. The early stretch of 30 seems especially designed to confound expectations. A movie-musical-esque swirl of strings and building-rattling bass, the opener, “Strangers By Nature,” aspires more to build a scene and create a vibe than to rack up replays. The same goes for “My Little Love,” a bleak and lengthy trip-hop track in which Adele explains her divorce to her young child. The song’s eeriness recalls “Haunted,” Beyoncé’s 2013 song that signaled a new phase of ambition, variety, and storytelling for that star—a swerve that surely informed 30.

Moving though the early part of the album is, it may leave some listeners wondering where Adele’s ferocity and melodic sharpness have gone. The middle third of 30 provides reassurance. With gasping electronic vocals and steady handclaps, “Oh My God” seems fit for a huge EDM remix. When the Swedish hitmakers Max Martin and Shellback link with Adele for “Can I Get It,” they deploy rap breakbeats, rock guitars, and a whistled hook out of 2000s indie pop. These two songs are cheesy triumphs that see Adele use her voice in surprising, even funky, ways. They capture the chaos that comes with rediscovering life after a dull stretch.

Eventually, Adele opens up a trove of more-classic ballads, and they’re simultaneously the heaviest and lightest work in her catalog. When I say heavy, I mean in terms of emotional intensity (the songs crest to sustained, even sandpapery wailing) and scale (multiple tracks break the six-minute mark). When I say light, I mean the shade of the emotion. There is no all-out sad song in the bunch; a steady reserve of hope and steeliness is like the sun behind the clouds. On the slow-building “Hold On,” the title phrase becomes a therapeutic mantra delivered by wolf howl. “Love Is a Game” closes 30 with the album’s catchiest, sweetest refrain as girl-group backing vocals add the merriness of a Christmas carol.

The album’s complicated emotional brew suits the situation that Adele sings about: getting everything you wanted, and then realizing that what you need is something different. The rambling lyrics on the glorious “I Drink Wine” evoke a barstool epiphany; thank goodness we can now gather in crowds to all sing, “I hope I learn to get over myself.” On “To Be Loved,” a track so stark that listening to it almost feels like a violation, Adele makes her case most forcefully, singing, “To be loved and love at the highest count / Means to lose all the things I can’t live without.” What went wrong in her relationship is only hinted at, but “Woman Like Me” suggests that she has had enough of lackluster lovers. “Complacency,” she sings with a low heat, simmering every syllable, “is the worst trait to have.”

That line may well be her motto these days: 30-era Adele rejects complacency on the levels of the personal, the professional, and the artistic. Some of her choices—a slow start to the track list, a few voice memos that tell rather than show her inner state, some platitudinal lyrics that could use a punch-up—aren’t the ones all of her listeners might have craved. But 30 generally blazes because Adele, with all the power and talent anyone could ask for, is doing exactly what she wants. May this album inspire you to knock on the walls of your own life and replace whatever can’t stand the test.