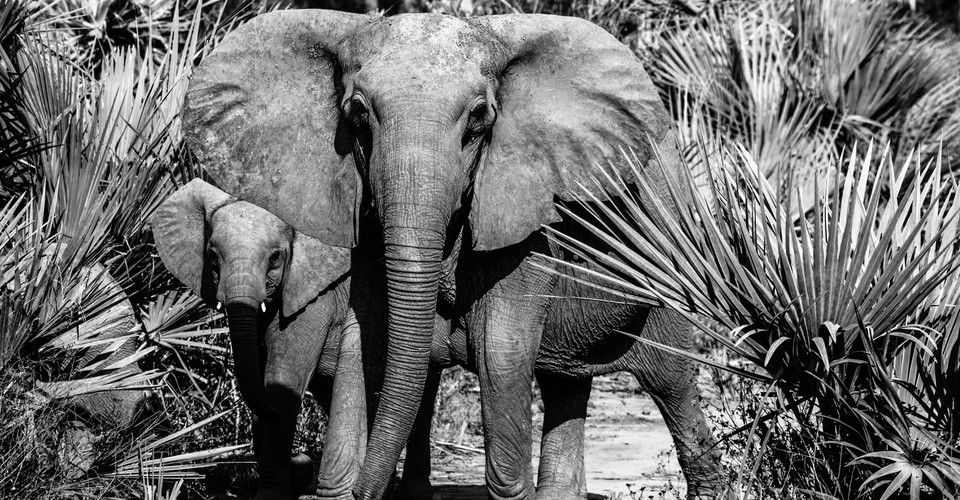 Shane Campbell-Staton never planned on traveling to Mozambique in search of tuskless elephants, but weird things can happen when you stay up ’til 3 a.m. binge-watching YouTube videos. (“Sometimes, a brother can’t get to sleep, Ed,” he told me.)

Battling insomnia, Campbell-Staton watched a video about Gorongosa National Park. The park was once Edenic, but during Mozambique’s civil war, from 1977 to 1992, much of its wildlife was exterminated. Government troops and resistance fighters slaughtered 90 percent of Gorongosa’s elephants, selling their ivory to buy arms and supplies. Naturally tuskless females, which are normally rare, were more likely to survive the culls; after the war, their unusual trait was noticeably common.

Campbell-Staton, a biologist at Princeton who studies rapid evolution, had questions. Was this a dramatic example of natural selection in action? Why only the females? Which genes were involved? He idly emailed his questions to a colleague who studies elephants, inadvertently setting off a chain of emails that recast his casual curiosity as serious intent, and soon found himself being introduced to a large group of Gorongosa researchers as “a guy who wants to study the genetic basis of tusklessness in elephants,” he told me. In response to which he thought: Wait a minute, I didn’t say that! I didn’t mean for this to be a whole thing. He had only ever worked with small anole lizards, but even so, when one of those researchers invited him to Gorongosa, he said yes.

Once there, Campbell-Staton met Joyce Poole, a veteran elephant researcher and a co-founder of the conservation nonprofit ElephantVoices. Using historical video footage and modern sighting records, Poole estimated that the proportion of tuskless females had risen from 19 percent before the war to 51 percent after it. The team confirmed that this was an evolutionary response: During the years of intense ivory-poaching, females without tusks were five times more likely to survive than those with them. The elephants then passed on the genes behind that trait to their descendants: About 33 percent of the females born after the war were tuskless.

To identify those genes, Campbell-Staton and his colleague Brian Arnold sequenced the genomes of 18 Gorongosa elephants and looked for stretches of DNA that differed between tusked and tuskless individuals. One region stood out—a small slice of the X chromosome that includes a gene called AMELX. In mammals, this gene influences the production of enamel and the growth of teeth. When it’s disrupted, teeth become abnormal and brittle. It made sense that some fault in AMELX might stop elephants from growing tusks (which, however distinctive, are just very big teeth).

This discovery also explained why only female African elephants are tuskless. AMELX is a bit player rolling with A-listers: Its immediate neighbors include essential genes that animals can’t survive without. But all of these genes are so tightly packed that “it’s hard to mess with one and not the other,” Campbell-Staton told me. A mutation that affects teeth by disabling AMELX could potentially bring down the entire animal if the neighboring genes are affected. Female elephants can tolerate such risk because they have two X chromosomes: If genes are disrupted in one copy, they have a backup. Males have no such luxury: With just one X chromosome, they suffer the full fatal brunt of any change that disrupts AMELX and the genes around it. That’s why tuskless males have never been recorded (at least in Gorongosa). They just don’t survive.

Other genes might also be partly involved in tusklessness, and the team isn’t clear on exactly what changes to AMELX have led to the trait. But evidence from humans suggests that they’re on the right track. In 2009, a team studied an 18-year-old woman who was missing the entire AMELX gene and parts of its essential neighbors. Among several developmental problems, the woman was missing one of her upper lateral incisors, while the other was extremely small. These are the exact same teeth that, in elephants, grow into tusks.

Campbell-Staton’s team has “done a convincing job showing that the Gorongosa elephants have evolved in response to poaching,” Kiyoko Gotanda, an evolutionary biologist at Brock University, told me. Usually, evolution is a slow process, but it can proceed with blinding speed. Hawaiian crickets went from noisy to silent in just 20 generations to avoid a lethal parasitic fly that was eavesdropping on their calls. The anole lizards that Campbell-Staton usually studies ended up with bigger toes and a tighter grip after hurricanes Irma and Maria battered the Caribbean, and better tolerance for cold after a polar vortex hit Texas. But almost all of these examples involved small creatures that breed quickly. To see tusklessness evolving after just 15 years of war, in a “long-lived, slow-reproducing species like the elephant, is incredible,” John Poulsen, a tropical ecologist at Duke University, told me.

Other countries have seen similar patterns. In Zambia’s South Luangwa National Park, the proportion of tuskless females rose from 10 to 38 percent from 1969 to 1989. In South Africa’s Addo National Park, 98 percent of females are now tuskless. These trends suggest that even big, slow-breeding creatures could rapidly adapt to the exceptional pressures exerted by humans, who have been billed as the “greatest evolutionary force” currently operating. But there’s a catch: The elephant’s chromosomal quirk stops males from easily reaching full tusklessness (although their tusks can shrink). And “ironically, fewer tusked females could focus poaching efforts on males even more than it already is, potentially nearly stopping reproduction,” Poulsen said.

Even if the evolution of tusklessness somehow saved elephants from poaching, the loss of their mighty teeth could lead to other losses. Tusks aren’t there just for show. Elephants use them as tools to strip bark from trees and excavate minerals from soil. Rob Pringle, an ecologist at Princeton and one of Campbell-Staton’s colleagues, has shown that these behaviors sculpt the savannah. In damaging trees, elephants create homes for lizards; in toppling other trees, they open up spaces for understory plants. A population of tuskless elephants is better than having no elephants at all, but it’s not functionally the same as a population of tusked ones. They’d be changed, and so probably would the world around them, and “all because we want their teeth, which sounds just absurd when you say it,” Campbell-Staton told me.

He and his team are now planning to study the consequences of tusklessness—and whether its rise has changed the elephants’ diet, the way they move nutrients across the land, and the other plants and animals in their environment. In doing so, they hope to complete the full story of Gorongosa’s tuskless elephants—a tale in which the economic forces that dictate the price of ivory and the political history that drives a country to war collide upon a handful of genes in a single charismatic species, in a way that could reshape an entire ecosystem in the space of a few decades.