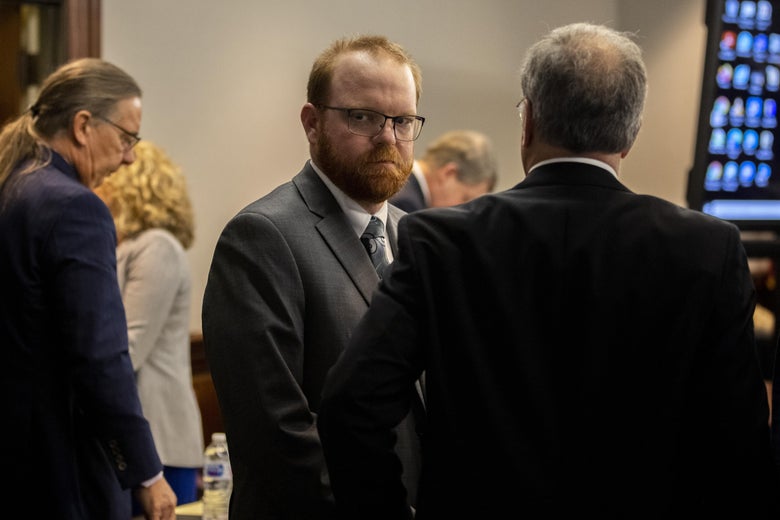 On Wednesday, jurors found Travis McMichael and his father, Gregory McMichael, guilty of several counts of felony murder for shooting and killing 25-year-old Ahmaud Arbery while he was out on a jog last year in Brunswick, Georgia.

The younger McMichael, who shot Arbery with a shotgun, was also found guilty of malice murder. Their accomplice, William “Roddie” Bryan, was found guilty of felony murder for his participation in the shooting. Bryan filmed the murder, providing the evidence that proved critical to securing both the initial indictment and a guilty verdict.

All men were guilty of aggravated assault and attempted kidnapping, after they pursued Arbery in their trucks and detained him while attempting to make a “citizen’s arrest.”

The two McMichael men face life in prison. Bryan also faces a sentence of life without parole. All three men have also been charged by the Department of Justice with felony hate crimes and still face trials in those cases.

The case came to national prominence after local law enforcement hesitated for more than two months to arrest Bryan and the McMichaels after the shooting. The police alleged that they wanted to arrest the McMichaels immediately, but were told not to do so by the initial prosecutor, Jackie Johnson, who ultimately recused herself because she had worked with the older McMichael. Johnson now faces criminal charges for obstructing the investigation into Arbery’s death after allegations that she had shifted the case to another prosecutor who aimed to let the McMichaels off without charges.

In the wake of the national protests for racial justice following the murder of George Floyd by police officer Derek Chauvin last summer in Minnesota, Arbery’s murder took on a renewed national resonance. Several prominent Black leaders called the shooting “a lynching,” highlighting its resonance with the long legacy of racial terror and violence across the South. Because Bryan and the McMichaels walked free for months after killing Arbery, and because of the McMichaels’ connections to law enforcement, many wondered if they would see justice.

The jury—composed of nine white women, two white men, and one Black man—had been deliberating since Tuesday. When the first guilty verdict of malice murder was read, some in the courtroom erupted into celebration, a sign of the relief felt by some who had nervously awaited a verdict.

The emotionally charged trial was imbued with racism from the defense, who sought to dehumanize Arbery and paint him as a criminal. During closing arguments, one lawyer for the defendants commented on Arbery’s “long dirty toenails,” prompting audible gasps from some in the gallery. The comment came after several inflammatory statements from the defense, including their attempt to bar “any more Black pastors from coming up in here” to sit with Arbery’s family.

Aside from these remarks, the jury heard very little about how race may have played a role in Arbery’s killing. The defense went to great lengths to try and depoliticize the trial and neutralize any insinuation that the McMichaels may have acted on racial animus. Though Arbery had never been accused of any crime, the McMichaels and Bryan rested their case on the premise that they had hunted down Arbery as part of a citizen’s arrest. Ultimately, they argued, the younger McMichael shot him in self-defense after Arbery tried to take his gun.

The prosecution, for their part, also downplayed race as a factor and instead focused on refuting the McMichaels’ claims that they pursued Arbery to make a citizen’s arrest. Linda Dunikoski, the prosecutor, systematically explained to the jury that in order to make a citizen’s arrest in Georgia, you need to have witnessed a felony or heard someone confess to such a crime. The McMichaels testified that they did not know if Arbery had committed a crime and that all they knew was that he was jogging down the street at the time they jumped in their trucks to pursue him. When the younger McMichael was first interviewed by the police at the scene, Dunikoski pointed out, he did not mention a citizen’s arrest or any potential crime Arbery may have committed.

Ultimately, the jury did not buy the McMichaels’ version of events.

The verdicts are the last in a series of trials that highlight racial tensions and the growing threat of white supremacist violence. Last week, a jury acquitted Kyle Rittenhouse for the killing of two men and the injuring of another during a racial justice protest last year. Rittenhouse also claimed he acted in self-defense. And on Tuesday, jurors awarded plaintiffs in the landmark civil rights case against the organizers of the 2017 Unite the Right rally in Charlottesville, Virginia, roughly $26 million in damages.* Each case has raised critical questions about the legal system’s ability to prosecute and punish hate.

Today’s verdict offers some semblance of justice for Arbery’s family and for others who have criticized America’s willingness to cloak extrajudicial killings in the language of self-defense. The verdict came just before the Thanksgiving holiday, which Arbery’s family will once again have to experience without him.

Correction, Nov. 24, 2021: This post originally mislocated Charlottesville. It is in Virginia, not Georgia.