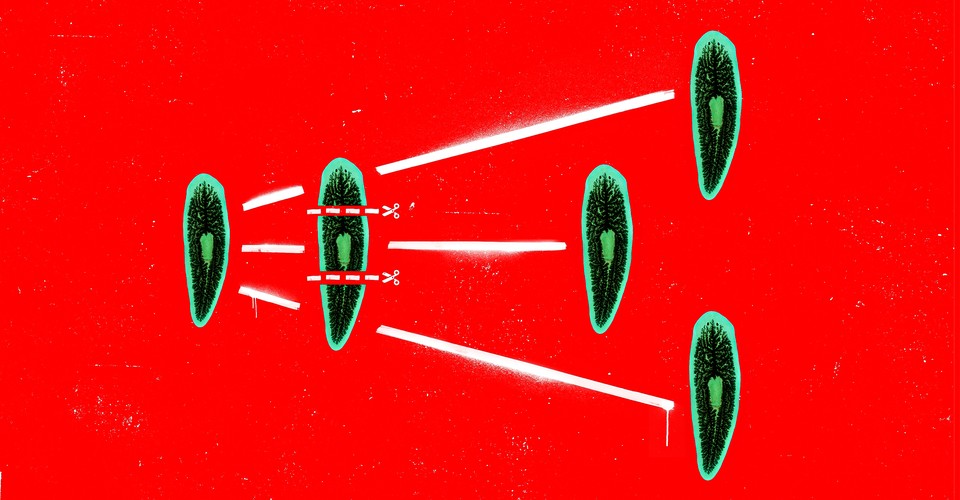 When planarian flatworms want to reproduce, some have sex. Others, more straightforwardly, tear themselves in two.

The latter option is fast and violent. The planarian begins as a small, flattened, sluglike creature with a spade-shaped head and two googly eyes. After a few minutes of stretching and ripping, it separates into two halves—a head and a tail. Within days, the head piece grows a tail. And even more miraculously, the tail regrows its head. “It’s just mind-blowing,” Eva-Maria Collins of Swarthmore College, who studies these animals, told me. Breeding them is a cinch: Given enough food, planarians will repeatedly double themselves by halving themselves. And if Collins needs more animals quickly, she can do with a scalpel what the worms do with their own muscles. As the naturalist John Graham Dalyell wrote in 1814, planarians could “almost be called immortal under the edge of the knife.”

There are thousands of species of planarians, and they’re all very different from more familiar worms like earthworms. Their bodies are basket-weaves of muscle and connective tissue, with no internal cavities full of soft organs. The mouth lies in the middle of the underside, and doubles as an anus. They release liquid waste through pores on their backs. They get oxygen through diffusion, and lack lungs, gills, hearts, and blood vessels. They do have brains of sorts—two clusters of neurons in the head. These lead to a ladder-shaped nervous system of two nerve cords that run down the body and are connected by crosswise rungs.

This unusual anatomy is even stranger because it can tolerate bisection. The feat has intrigued people since at least the ninth century, but it is hard to observe. Planarians self-fragment just once a month, and the process is over within minutes. They also prefer to split in the dark and will stop if disturbed. To study them, Collins and her team filmed one species, Dugesia japonica, continuously for months. They saw that the creature begins its self-dissection by contracting its midsection to create a waist, changing its shape from a cigar into an hourglass. It then anchors its head and tail—to a petri dish in the lab, but usually an underwater rock in the wild—and contracts the intervening muscles, repeatedly stretching the flesh of the waist until it ruptures. (The process varies among species; in Schmidtea mediterranea, the bigger the worm, the more chunks it can tear off its tail end.)

Once a worm has split, the fragments don’t just sit around. As soon as they’re free of each other, both parts seem “to possess the properties of a perfect animal, moving about in the water in the same gliding manner as before the separation,” the naturalist James Rawlins Johnson wrote in 1822. Two centuries later, Collins showed that this autonomy is more profound than anyone had suspected. Her team (including the undergraduate students Dylan Le and Ziad Sabry and a high schooler, Aarav Chandra) showed that an intact planarian will turn if prodded in the head, stretch if prodded in the middle, and contract if prodded in the tail. But if that planarian is cut into three sections—head, trunk, and tail—each piece behaves like the full creature. The front end of the trunk piece will turn as if it’s a head, and the back end will contract as if it’s a tail.

Collins thinks that the neural circuits controlling these behaviors repeat down the length of the planarian, so that every part of the body is capable of acting like a head, a trunk, or a tail. The presence of an actual head normally stops downstream regions from acting like one. But upon decapitation, the frontmost part of the remaining planarian can assume the duties of the now-missing head. Collins sees this extreme adaptability as a survival strategy. It means that every fragment can flee from danger, giving it enough time for its extraordinary regenerative powers to kick in.

Not all planarians can regenerate, but those that can tend to be spectacular at it. When food is scarce, they can “degrow” by destroying their own cells, only to bulk up again when conditions improve. They defy the aging process by regularly replacing their old tissues and organs. They can recover from almost any physical injury (although some are trickier; an incision between the eyes can prompt a planarian to regenerate two heads). The biologist Thomas Hunt Morgan once estimated that a full planarian could regenerate from just one 279th of its body. “Not many animals can regenerate their nervous systems, and I’m not aware of any others that can regrow a brain,” says Oné Pagán of West Chester University of Pennsylvania, who wrote The First Brain: The Neuroscience of Planarians.

When planarians divide naturally, the head fragment is usually bigger and contains the brain, eyes, smell and taste sensors, and mouth. “The head piece just needs to heal up the wound and go on its way,” Collins told me. The tail, meanwhile, must regenerate everything else. Without a mouth, it has no way of acquiring nutrients. Instead, some of its cells self-destruct to provide the raw material for making new flesh. Slowly, the isolated tail undergoes a “massive remodeling,” Alejandro Sánchez Alvarado, a planarian expert at the Stowers Institute, told me, “and what you end up with is a tiny version of the original animal.” Tail pieces are about 10 times more likely to die than head ones, Collins added, but still, about seven in eight survive.

These powers depend on special cells called neoblasts, which have been found only in planarians. They are distributed throughout the creature’s body, making up about 25 to 30 percent of its cells. In 2014, a team led by Peter Reddien of MIT bombarded a planarian with a fatal dose of radiation and transplanted a single neoblast—just one—from a second individual onto the doomed animal’s tail. As the recipient died from the head downward, the transplanted neoblast started producing new tissues from the tail upward. The new cells eventually replaced all the dying ones, as if the donor planarian, through a single cell, had taken over and revitalized the recipient’s cadaver. After two weeks, a complete and healthy animal—a planarian of Theseus—crawled away.

Of course, most animals grow from a single fertilized egg. But as that egg becomes an embryo, the cells within it become more set in their ways. A skin cell does not turn into a neuron. Stem cells are more flexible but, in adult animals, even they have their limits: A blood stem cell cannot make liver or heart cells. The neoblasts of adult planarians have no such restrictions. They are pieces of unfettered possibility, capable of producing any tissue or organ.

Neoblasts don’t work in isolation. The one that Reddien transplanted didn’t start making eyes or a brain; it created tissues appropriate for its location. That’s because the concentrations of certain molecules change along the length of the planarian, from front to back and top to bottom. This creates a kind of coordinate system, which tells the cells in each section where they are in the overall body plan. They can use that information during the regeneration process to regrow what is needed. Heads regenerate tails, not extra heads (although mistakes can occur). Tails make heads. Trunks sprout heads and tails. And no matter their origins, the new animals seem to remember something of their past existence.

In the 1950s and ’60s, the biologist James V. McConnell showed that headless planarians that were forced to regrow their brains could still remember behaviors that they learned before their decapitation. He even published results suggesting that untrained planarians could perform behaviors that trained ones had learned if the former cannibalized ground-up pieces of the latter. Skeptics criticized these experiments and argued that McConnell simply saw behavior that he wanted to see. But decades later, Mike Levin and Tal Shomrat of Tufts University developed a machine that could automatically train and track planarians without any human interference or bias. They showed that worms that were trained to recognize the texture of a rough petri dish could still do so after being decapitated and regrowing new heads.

At minimum, Levin argues, this shows that memories can indeed be stored outside the brain. It also strengthens his feeling that the textbook view of memory—that it’s encoded by the strength of synaptic connections between different neurons—is wrong. Instead, Levin suspects that nervous systems may have evolved to interpret memories and not encode them; they are stored elsewhere, in some aspect of our cells that no one has yet pinned down. This is, to be clear, highly speculative. “We only have one study and it’s far from definitive,” Levin told me. “But this is one of many pieces of data suggesting that we don’t really understand memory at all.”

Planarians complicate other seemingly simple concepts too. Consider a question that Levin and his colleagues posed in 2016: After a bisected planarian regenerates into two new animals, would the planarian that grew from the head consider the one that grew from the tail to be its twin, its sibling, its child, or itself? The answer isn’t obvious, because these words were defined by humans—a species that, last I checked, cannot reproduce by rending ourselves apart. “The things that are weird are exactly the things you need to be paying attention to,” Levin told me. “They tell you that your model of the world is incomplete in important ways. You have to treasure the exceptions.”

Planarians are certainly exceptional, but they’re not unique in their talents. Many other animals can regenerate missing body parts, including salamanders, lizards, and starfish. Several can reproduce by splitting in two, including sea anemones and the tentacled Hydra. Many scientists study these creatures in hopes of finding medical breakthroughs that can restore damaged organs and lost limbs. But the more immediate prize is realizing how incomplete our understanding of nature is, and how constrained our language and concepts have been by our own inflexible, indivisible bodies.