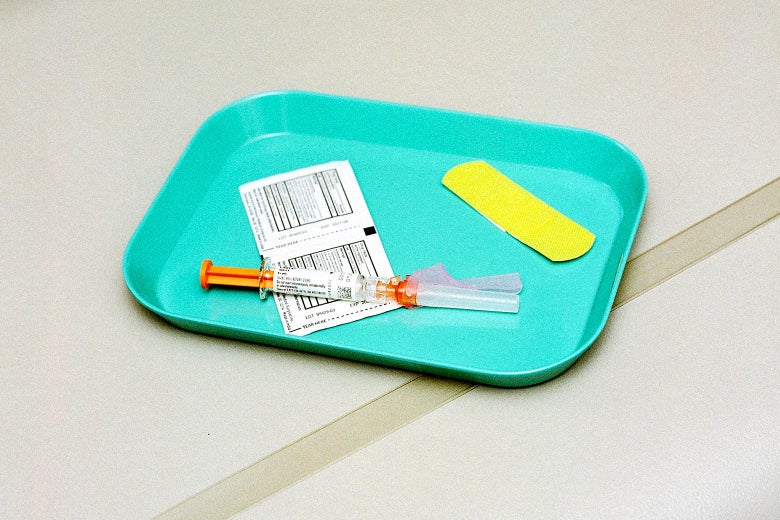 Every adult who has been vaccinated is about to be eligible for boosters, it seems. On Friday morning, the Food and Drug Administration authorized a third shot for people over 18 who have received two doses of Pfizer or Moderna six months or more ago. While the Centers for Disease Control and Prevention still needs to weigh in [Update, 4:37 p.m.: They did, also recommending boosters], the verdict is pretty clear: Just go ahead and make that booster appointment!

This is a good thing because more protection is a good thing—but also because the rules about who is and who isn’t eligible were getting pretty confusing. “I think I’m eligible under New Hampshire criteria,” Lindsey Leininger, a public health scientist at Dartmouth and member of Dear Pandemic, told me earlier this week. She’d recently gotten her booster shot in part because she’s concerned about teaching in person—if she got a breakthrough infection, it would mean potentially spreading it around a campus—as well as December festivities. “We are planning on seeing some medically vulnerable people over the holidays,” she said.

But the exact requirements for who is and is not eligible for a booster were a little baffling, even to someone like Leininger. “I am having a hard time keeping up with this, and this is my job,” she told me earlier this week. While boosters have been recommended for a while now for those who received the single-dose Johnson & Johnson vaccine, as well as those who are elderly and/or immunocompromised, the eligibility expanded from there in piecemeal and sometimes confusing ways. For example, in October the CDC quietly added some mental health disorders to the list of risk factors that can put one at higher risk for COVID. It’s possible that a mood disorder could affect the immune system and make it harder for the body to fight infection, some experts say—or maybe it’s just that mood disorders are correlated with other risk factors for COVID-19, as William Moss, the executive director of the International Vaccine Access Center at the Johns Hopkins Bloomberg School of Public Health, suggested to me. While it’s great to see mental health considered this way, the vagueness of the guidelines left potential booster recipients to make a judgment call about whether, say, their depression was bad enough for them to qualify, says Leininger.

Should you rush out and get a booster as soon as the CDC makes the call, or even sign up ahead of that decision? The short answer is: Sure, though it’s not an emergency. Leininger and Moss both agreed that for healthy and young people the original vaccines still hold up very, very well against severe outcomes. While there was discussion earlier in the fall about whether boosters were really the best use of the public health machine’s energy—as opposed to doubling down on efforts to get more first doses into arms—the reality is that boosters are here now, and there are plenty of vaccines to go around. You will not be taking a shot from someone who hasn’t gotten theirs yet in America. Global vaccine equity is still a huge issue, but not one that each of us is personally equipped to solve—and forgoing your booster this month won’t make a difference to a person in a poorer country, like Zimbabwe.

Moss, whom I also spoke to prior to the FDA’s decision, noted that young men might reasonably make the personal choice to hold off given their elevated risk of very, very rare side effects like myocarditis and the fact that two doses of the vaccine already protect well against COVID. Though he added, “I think that side effect is rare enough so that that calculation favors the vaccine”—and of course, the FDA and CDC are doing that calculation too, in their choice to recommend boosters. Leininger gave the sage (if hard-to-follow) advice that you should check in with your doctor if you have any concerns about whether to get the shot, especially if you’re going to be jumping the gun on the CDC’s decision.

Moss also offered a bit of slightly off-the-cuff wisdom: “I haven’t heard anyone recommend this, but one way to play the game—maybe it’s an impossible game—is if we think there is going to be a big surge of cases in January, after the holidays, someone who is young and healthy might say, ‘I’m going to get a booster dose in early December.’ ” His reasoning is that antibody levels following a third dose tend to peak after a few weeks for younger folks, giving them the most protection when risk is the highest (which, as he suggests, may or may not be just after the holidays). You might also time your booster to be a bit before whatever the riskiest thing you’re going to do in the next few months. Or maybe your main concern is side effects, like arm pain and fatigue, which can show up after booster doses—in which case, time the dose ahead of a stretch where you can take a day or two off if you need it.

If you received an mRNA vaccine, the guidelines say you should get a third dose at least six months after your second shot. But that guideline is a little arbitrary, notes Moss. In fact, he hopes his 93-year-old father, who received his second shot in June, will get his booster soon. “He should probably get his booster dose early to be protected for the holiday.”