How Amazon helped create an America in despair

‘A big goal of my book is to get the average upper-middle class consumer to reckon more with what’s behind the one-click,’ Alec MacGillis told Protocol.

Read original at Protocol — The people, power and politics of tech 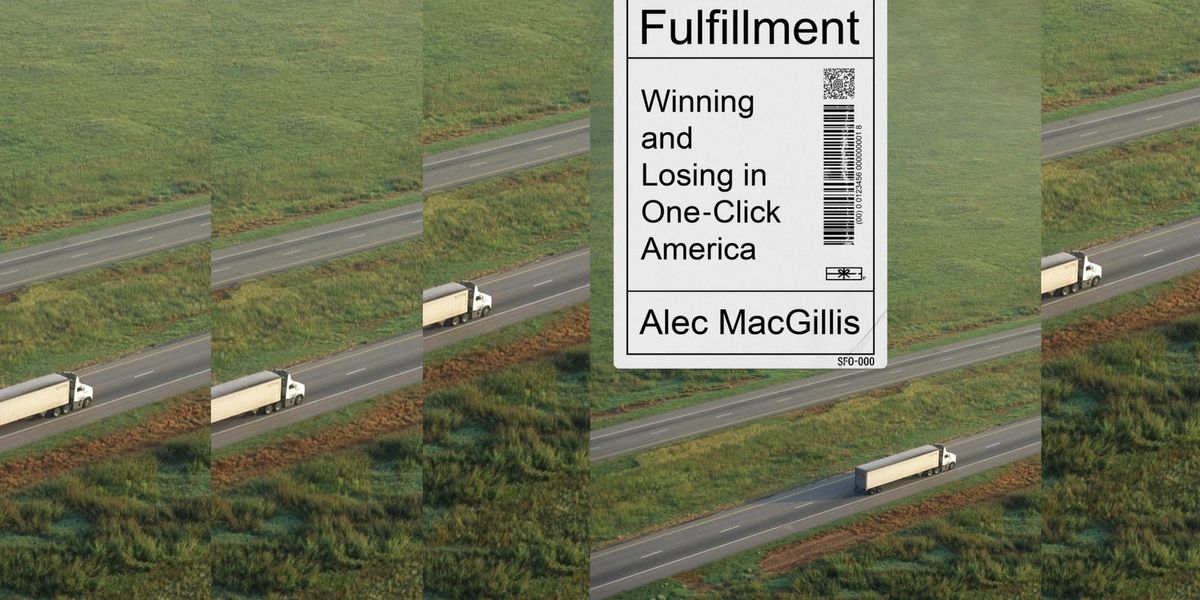 "Regional inequality was making parts of the country incomprehensible to one another — one world wracked with painkillers, the other tainted by elite-college admission schemes," Alec MacGillis writes in the opening chapter of his new book, "Fulfillment: Winning and Losing in One-Click America."

"Fulfillment" is as much about Amazon as it is a wider exploration of American despair; it tells a story of declining living standards, grueling work, surging rents and a pervading sense of hopelessness. MacGillis strays off the well-trodden paths of tech journalists, relaying Amazon's impact on places like Dayton, Ohio; El Paso, Texas; and Carlisle, Pennsylvania. The book provides intimate portraits of lives upended by a company that prides itself on "customer obsession." It also traces those experiences back to American power centers, exposing the source of Amazon's considerable political influence.

Why did MacGillis decide to tell the story of Amazon through the lens of growing regional inequality? "This all goes back to having grown up in a small newspaper family," MacGillis told Protocol. "Growing up, I had a strong sense of the importance of local news and also the gap between places like Pittsfield and cities like Boston and New York."

After working for The Washington Post, MacGillis decided he needed to leave the D.C. bubble. He moved to Baltimore, where he works as a reporter for ProPublica. "Fulfillment" came in part from MacGillis's desire to bring the stories happening outside elite bubbles back into them: "A big goal of my book is to get the average upper-middle class consumer to reckon more with what's behind the one-click," MacGillis said.

In our interview, MacGillis discussed worker unionization efforts, why Amazon allowed "Nomadland" to be filmed in its warehouses ("the film gives a much more benign portrayal") and the role free trade agreements played in allowing a company like Amazon to exist.

This interview has been edited and condensed for clarity.

The vast majority of tech reporting comes from either New York or San Francisco. The media reckoned with this insularity to some extent after the 2016 election, but the motivation to do so has largely disappeared. What role do you think the tech media plays in creating the regional inequalities discussed in "Fulfillment"? And how does the hollowing out of local journalism factor into that?

You simply cannot overstate the role that the unraveling of local media has played in our country and in [creating] the problems that the book describes.

It's gotten to the point now where the collapse of local journalism actually has an effect on events. It has an effect on elections, not just Trump's election, but local elections that [now] lack vetting of candidates. It also contributes to the breeding of resentment among local communities where, instead of turning to your local paper [or] local TV station, you're turning to Facebook.

But I think the tech media's concentration in the San Francisco, New York, D.C. hubs is part and parcel of the general problem of media concentration. I suppose it's probably even more acute because it's almost exclusively in these places.

The concentration is terrible for the media in the country. So much is being missed as a result of that and it skews perspectives terribly. I think so often of traveling around the Midwest during the Great Recession and then coming back to D.C., where I was working for The Washington Post, and [feeling a] sense that everything in D.C. was totally hunky-dory, totally prosperous.

Are there any elements in your personal life that draw you to look beyond these bubbles? You've been in reporting jobs where it would be easy to just stay within the D.C. media circuit.

This all goes back to having grown up in a small newspaper family. My dad was the editor of the Berkshire Eagle, a great little paper in Western Massachusetts. So growing up, I had a strong sense of the importance of local news and also the gap between places like Pittsfield and cities like Boston and New York.

I came up through journalism through all sorts of small papers, made my way off the beaten path and learned how important it was to be out there and how stories were being missed if you weren't there.

One big reason why I moved back to Baltimore after being at The Post is that I felt like it was hurting my journalism to be in the rich, complacent city. I wanted to be back in a more real place, even if it was just 40 miles away. That's proven to be the case, it's helped me enormously to be out of Washington.

Do you think most people in the U.S. are aware of the working conditions in Amazon warehouses? Would more awareness change the behavior of Amazon customers in any way?

I don't think many Americans are aware of just how grueling and strenuous these jobs are. A big goal of my book is to get the average upper-middle class consumer to reckon more with what's behind the one-click — all the strenuous exertions that that one-click sets off within the warehouses.

But I'm not all that confident that people learning more about the conditions will actually get people to change their behaviors. The fact is that there was more attention brought this past year to what workers were dealing with in the warehouses, especially as far as coronavirus risk. Meanwhile, we saw Amazon sales go absolutely through the roof, to a degree that I don't think we can even begin to grapple with: 40% increase in sales year-over-year, 500,000 more workers hired, 50% more warehouse space, stock up 86% year-over-year, Bezos's wealth up $58 billion in one year.

What were your thoughts on the movie adaptation of "Nomadland"? Were you surprised Amazon let them film inside a warehouse?

I was surprised by it when I heard that they allowed it. But then when I watched it, I wasn't so surprised because I saw how the film gives a much more benign portrayal than what Jessica Bruder's book does.

Did any particular differences stand out? Or was it more about what they didn't include rather than what was presented?

More the latter. There are all these mentions of accidents and moments of high-pressure anguish in the book that these older folks experience in the warehouse. Also a sense of existential despair they feel about the work, about spending all these hours, as the book puts it, packing up crap from China that's going to end up in a landfill in a month.

There's no sense of that in the film. The warehouses are almost this home base that the workers return to when it's holiday season. It's almost like coming back home for the holidays.

Is it too cynical to think Amazon allowed the filming because it was meshing the warehouse work with an almost aspirational, escapist lifestyle?

There's no question that there was some kind of political PR calculation made by Amazon. Frances McDormand has spoken about this a little bit. There was a piece in New York Magazine recently, a profile of Chloé Zhao, where McDormand is quoted as saying that Amazon was feeling a flash of good PR right at the moment when they approached them about this, because it was right after they raised the wage to $15 an hour. So that might have played into the decision — they were feeling that they were more presentable in general as a company at that moment.

One thing that came across to me in these encounters with various Amazon executives is there's a certain blitheness to them. The company is so successful and so popular — there's that famous Pew poll showing it as the most admired institution in America among Democrats — that there's a sense [executives] don't even have to worry much about scrutiny or questioning. They're so popular, so in demand, that they reign supreme. America has shown with its spending habits that we're basically OK with them.

Amazon has been making a very public push to advocate for a $15 minimum wage. Is this just a PR opportunity, or is there something to the idea that it would clear out a lot of their smaller competitors?

I think it's absolutely both. It's both a PR move, and it's a competitive move, knowing that some of it's tougher for some of their smaller rivals to make that wage.

It's similar to what they did with the sales tax, where for years and years, they avoided assessing sales tax. Then they actually had to have warehouses everywhere in order to meet one- [or] two-day delivery deadlines, and thus had to start assessing sales tax in most places because of the physical location rule. They then flipped and became supporters of sales tax on ecommerce sales, knowing that it was tougher for a lot of their smaller competitors to handle that.

What are your thoughts on the unionization effort by Amazon warehouse workers in Alabama?

The core chapter of the book is being set at Sparrows Point, this place that had the largest steel mill in the world. [Their] steel mill [was] wiped clean, replaced by a huge logistics business park with two Amazon warehouses. What I describe in that chapter is how we've come full circle from very low-paid, high-pressure steel mill work in the early 20th century that got better over time because the union came in and organized workers. Now we're back to a new form of low-wage, high-pressure work at the warehouses in the exact same place. The question is whether workers will be able to prove their lot the way the steel workers did through organization. Now we're seeing if there's going to be a first step in that direction.

What role did the post-Reagan trade deals such as NAFTA play in allowing Amazon to come into existence and grow as big as it did?

A very large role. NAFTA and then WTO, [which played] maybe an even bigger role and [started] the flow of cheap goods, especially from China.

But as important would be the economic fallout of those deals in American manufacturing communities that were devastated by the deals. Economists like David Autor [have shown] how disproportionate the effect of the trade deals was in manufacturing-heavy communities in America. Entire parts of the country [experienced] huge employment loss, whether in Dayton or Baltimore, which then provides the labor supply of people who are so desperate for employment that they're willing to work for what was a couple of years ago $12 or $13 an hour and now $15 an hour, doing this really tough work.

Why Trump’s social media network will be an epic failure