How Can I Get My Parents to Disinherit My Lazy, Cruel Sister? 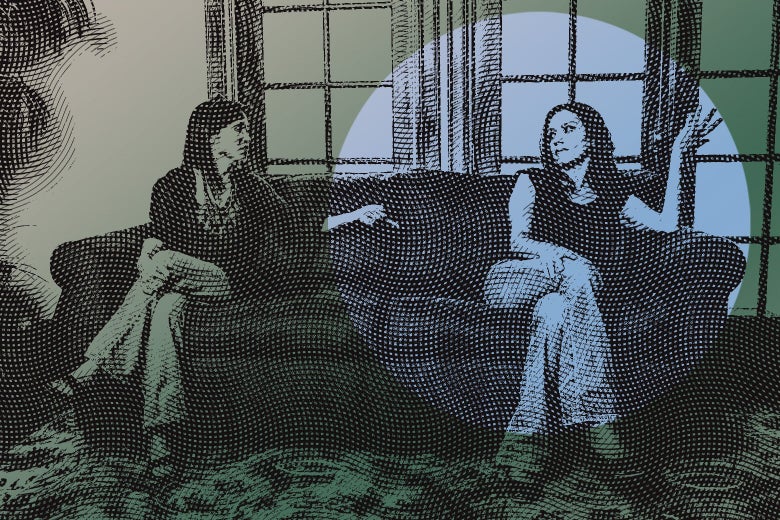 Pay Dirt is Slate’s money advice column. Have a question? Send it to Athena and Elizabeth here. (It’s anonymous!)

I am my parents’ youngest daughter. My oldest sister, “Nell,” was borderline cruel and abusive to my middle sister and myself growing up. Now she is entitled and irresponsible. When she was 17, in a bout of bipolar mania, she overdosed in her high school bathroom. She survived, and got treatment, but has never been a producing member of society. Nell is closer to 40 than she is 30, but she has no driver’s license or job, and has no plans to get either. She wasted thousands of dollars on culinary school, including completing a semester abroad, but she scrubbed out when it got too hard. While her house is being remodeled, she and her husband have moved in with my parents (along with their children and pets). They don’t pay rent, they treat the house like a storage facility, and when her stepson got COVID, she didn’t get him tested to ensure he had recovered.

Can I ask my parents to disinherit her? While it is clear I resent her, I have practical reasons. I don’t believe she is at all fiscally responsible, but that is the lesser issue. I have another sister, “Kay.” Kay requires a caretaker due to various medical issues. She will never live alone or hold a job. This year alone, she was hospitalized twice. Right now, she lives with my parents, but when my parents die, I have agreed to become her primary caretaker. Nell has never provided care, while any time I visit my parents, I try to lighten their load. Kay doesn’t even want Nell’s help because of Nell’s unkind attitude. I’m already seeking durable power of attorney over their estate. If I obtain the power of attorney, but Nell still receives a portion of the estate, what protections do I have for Kay and myself?

—The Youngest in Years, but the Oldest in Spirit

You aren’t alone in having a family in which your parents financially support one of their adult children in ways that seem overly indulgent. It sounds like Nell’s life has been tumultuous, and whatever the reasons for the tumult, it’s surely taken a toll over the years. Your parents may see giving her shelter during this remodel as the path of least resistance with a child who has caused them a lot of worry. But even if you, as the other sibling, can understand this situation intellectually, resentment builds up over the years and before you know it, there is a Hunger Games event being held over the will. Despite odds being ever in your favor, I see the fear in the idea of not being able to financially support your sister Kay while hot mess Neil buys furniture for the new remodel.

As for your question, I think the best idea is to try to head this off at the pass, before the situation you fear becomes a reality. Ask your parents to meet privately and bring up your concerns of taking care of Kay when they are no longer here. Share how you feel that all funds left after they die should go into a third party special needs trust for taking care of Kay’s expenses. Yes, I said all. If you specifically tell them to cut Neil out because of what you perceive as irresponsible behavior, they may chalk it up to sibling resentment. I am choosing to believe that you honestly think all of your parents’ money, including your share, needs to go to Kay’s care, and this is what you should propose to your parents. I also think it wouldn’t be a bad idea to meet with an attorney who specializes in special needs law, that can help you with your power of attorney paperwork and give you the next steps in your journey. Good luck.

My boyfriend plans to move into the house that I own and we both love. It’s a modest house, and the mortgage and utilities are around $1,000 per month, which is comfortable for me on my own (and also cheaper than rents in our local housing market). The issue is that my boyfriend makes about five times what I do, and we are exploring fair and equitable ways to split the costs of housing. He could easily afford to pay the whole monthly housing costs and I could pay down my mortgage principal, but it feels weird to have him pay toward my personal equity. We want to work out a plan that feels right. We plan to be together for a long time, but are not at the point where we mix our finances. What advice do you have for this very fortunate problem we have?

Congratulations on moving in together! It is a huge step, both in a relationship and finances, so it’s great that you realized that, early on in the game. Since I’m not sure how long you and your boyfriend have been together, I advise you to keep the mortgage and the title in your name for the time being. Split all expenses down the middle, in a 50/50 split, and keep the arrangement that way for at least six months. If you feel you are both in a good place with the relationship, and you want to switch up the plan, I think you can do one of two things.

First, you could discuss a tenancy in common title. A tenancy in common title will allow you to add him to the home with a certain percentage of ownership, as he pays into the loan. Just be aware that if things go south, he at any time can sell his share of the house without having to have your consent. With this type of title, if one of you should die the other will inherit the home, unless stated differently in a will or trust.

Another option is to notarize an agreement with an estate attorney. With an attorney, you can come up with a financial arrangement that would take effect should you decide to part ways: sort of a pre-nup for cohabitation. Alternatively, an attorney may suggest keeping your home in your name, to protect you both financially and legally.

After my father died, my mother’s spending has gotten out of control. Her new “Life’s too short!” mentality, combined with a worsening gambling addiction, has led her finances to take a nosedive. She doesn’t seem to care that she’s cleaning out her retirement account and racking up debt, because she truly believes that all her bills will magically disappear when she’s gone. But in reality, isn’t she just making a big mess for the next generation to clean up? What impact can my mother’s bad financial habits have on me and my siblings? Do you have any advice on how we can help her see clearly and get out of these bad habits?

I am so sorry about the loss of your father. I’ve experienced the loss of a parent firsthand and it’s rough. It’s also rough to watch the parent that’s here spiral due to their grief.

TL;DR: You are not responsible for the debt your mother leaves when she is gone, unless you co-sign something for her, OR she ends up leaving behind medical bills and you live in a state that recognizes filial responsibility laws. I’ll explain.

When someone dies, their estate inherits their debt. So the debt she owes would be taken out of whatever assets she has left. It doesn’t sound like there is going to be much left to pay off her creditors, so any legal action they pursue will be short lived, unless what’s left is a certain kind of debt: the aforementioned medical bills, or payments due to a nursing home. This is where filial responsibility law comes in.

Filial responsibility laws hold an aging parent’s children accountable for their medical bills, should Medicaid not cover those expenses. It’s not right, if you ask me, but some states have gone this route to allow creditors to seek payment from families. There are 26 states that allow filial responsibility laws to govern what happens after a parent dies, so your next step is to do your research to see if you live in one of them. From there, you can decide your next course of action, whether it be seeking an attorney who specializes in elder law, therapy for your mom, or both.

I have been working to rebuild my credit for the past three years. Slowly, it has climbed back into a respectable range, and it’s been exciting to look at the monthly updates. At least it was until last month, when I saw a 30-point drop that moved me back out of the “good” range. The reporting agency kindly provided a reason: I haven’t made any recent mortgage or installment payments. These payments are not late: We paid off the mortgage 12 years ago (ditto the cars). Should I apply for an installment loan to get those points back? Or will making monthly payments on products from a company like Dyson (ooooh, a nice vacuum cleaner!) count as installment payments? I need a new laptop, but when I looked closely at Apple’s financing, it looks more like another credit card.

Ouch! Payment history and your credit mix are both factors in your credit score, so the agency is right to account for the drop that way, but it still stings to feel like you’re being punished for being free of your mortgage and car loan!

To address the specific questions: Both of the options you’re thinking about would count as “installment credit” in the eyes of your reporting agency. It doesn’t matter how big your monthly payments on these plans are, just that you’re making them regularly. Dyson offers Affirm loans that are backed by various lenders—which one you’d have seems dependent on where you live. Apple offers Apple Card Monthly Installments which are backed by Goldman Sachs, and would count as installment credit. BUT the fine print states you need an Apple Cash Card as well. Either installment loan would work for trying to improve your credit, but the Apple route would be extra work.

You can also try to ride it out and wait for your credit to balance out over time. I myself love my Dyson, so treat yourself if you can afford it. Just be prepared for the same thing to potentially happen again, if you choose this route and pay off the vacuum/laptop on time!