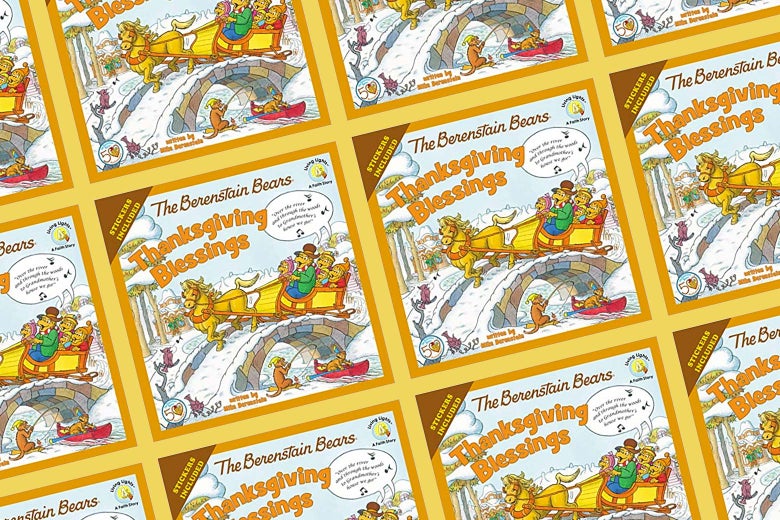 Last year, around this time, my husband and preschool-aged child came home from our local bookstore with a new-to-us Berenstain Bears book: Thanksgiving Blessings (2013). My husband said, with a glint in his eye, “Why don’t you read the new book with J.?” I tried but had to stop so many times to say, “I hate this,” and “Oh my GOD!” that my daughter got annoyed and wandered away. “It’s a Mike?” I asked my husband. “It’s a Mike,” he confirmed.

I write to you today, fellow parents, to explain what that means—and to issue a warning. Steer ye clear of Thanksgiving Blessings, unless you like breaking your brain every autumn trying to explain toxic patriotism to a little person who just likes Sister Bear’s polka-dot blouse.

Lines of dialogue and pictures from the Berenstain Bears’ 1980s adventures, which we read avidly as kids, are some of the earliest bits of culture I remember consuming. The labeled shoeboxes in the closet in Messy Room have translated into my obsession with organization. The split page in In the Dark that goes back and forth between Sister screaming when the light is off and Brother sulking when the light is on comes to mind whenever I have a seemingly unsolvable argument. And I think about Mama coming home from the quilt shop in Mama’s New Job, dog-tired, every time I hit the house at the end of a workday. I don’t quite feel nostalgic about the old books we read back then—the hold they have on my adult brain is more like a haunting.

If you don’t currently have a child, you may not have realized that the Berenstain Bears series, which started in 1962, now boasts hundreds of books describing different aspects of the Bear family’s little life in Bear Country. The diversity of approach of these books—some are for babies; some are for early readers to practice on solo; some are encyclopedias of science and nature—can be confounding when you have a 4-year-old book acquirer who just loves this universe of upright quadrupeds who wear the same outfits every day (but—as she, who loves going barefoot, tends to point out—“no shoes”). She can’t tell the difference between the types of Bears, and so we’ve read a lot of them—and they’re not all as wonderful as I remember.

Of course, I can see, now that my mother has handed down our old volumes to my child, that even the older books that make up part of my deepest brain weren’t perfect. Papa was always a classic male bumbler, inept at everything related to housework, occasionally very bad at handling his anger, and prone to annoying lectures about how manners are for “mamas and cubs”—not for papas, like himself. And the book Too Much Junk Food has some outright fatphobic pages that are the reason why I’m not linking it here. But those little inklings of outdatedness were nothing compared to what’s in the more recent group of books I call the “Mikes.”

A “Mike,” my husband and I found out by dint of a 2016 article on the topic by Saul Austerlitz in the New York Times Magazine, is a Berenstain Bears book written by Stan and Jan’s son Mike, who took over the franchise after Stan died in 2005 and Jan in 2012. He’s responsible for some Bears volumes that are relatively anodyne (we have We Love the Library, and it’s fine), but the real true Mikes are the explicitly Christian volumes published by HarperCollins’ Zondervan imprint, as part of the “Living Lights” series: Faithful Friends, Discover God’s Creation, Say Their Prayers, and many more. And although these books are marketed and promoted to Christian readers—Austerlitz interviewed a publisher at Zondervan who said that the books are very popular with home-schoolers—they have made their way to more secular kids as well. Secular kids like J., who will simply not be dissuaded from purchasing books like Thanksgiving Blessings.

The book, like the other “Living Lights” Bears installments, has Scripture on the title page: “Let them give thanks to the Lord for his unfailing love and his wonderful deeds for mankind, for he satisfies the thirsty and fills the hungry with good things” (Psalm 107:8-9). It starts at the Bears’ treehouse, with an early snowstorm. Papa borrows Farmer Ben’s horse and sleigh (classic Bear Country!) to drive the family over to Grizzly Gramps and Gran’s for their big dinner. “There’s more to Thanksgiving than just eating lots of yummy food,” Mama, always the wet blanket, reminds the excited group in the sleigh, after a round of “Over the River.” “There are many other Thanksgiving blessings to remember,” Papa says. “For instance, the blessings of faith and freedom.”

Papa proceeds to tell the story of “Bear Country” in three two-page spreads. The first spread is labeled “Faith and Freedom.” The “Pilgrim Bears” (gray hats with buckles) land in “Bear Country” “long ago, seeking a land where they could worship God in freedom.” (The group in the illustration finds a rock conveniently labeled “Grizzly Rock”—so easy to know you’re in the right place, when God is on your side!) There, the “Native Bears” (buckskins, feathers in their headbands) “gave them food and shared in a great feast.”

The next spread, “Peace and Plenty,” is, I guess, the history of colonial America—colonial Bear Country? After the Pilgrims, “many others traveled here to find freedom,” making their way by farming and harvesting. “Then enemies came from across the sea and tried to take it all away,” Papa explains. I can tell from an image of bears wearing blue coats and bears wearing red coats (no shoes), firing on one another near a bridge, that this is a reference to the Revolutionary War, though the idea that the British were “enemies from across the sea”—rather than countrymen, business associates, and sometimes close relatives of the Colonial population—is bizarre, unless you’re the kind of historical storyteller who wants to set up an “us versus them” mentality. “There was war and suffering,” Papa goes on. “But peace came, at last, and the land was safe.”

The third spread, “Work and Play,” is, I think, supposed to be about the 19th century. It makes sense that this is where the Bear Country history lesson stops. As Austerlitz observes, the Berenstain Bears, even before Mike took over, always lived in kind of a throwback universe—a place where there’s electricity, but where Mama uses a big two-piece 1930s-vintage phone to call around to find a sitter. “With peace and plenty, the country grew,” Papa explains. The spread illustrates the idea of “work” with roads, cities, bridges, covered wagons, trains; “play” is one image of a circus with a bear on a penny-farthing bike and one of bears (no shoes) stomping in joy at a square dance.

That’s it! That’s the history of Bear Country. The group arrives at Grizzly Gramps and Gran’s house. The family sits at the table. “It’s a shame there aren’t any Native Bears here to share it with us,” says Brother. “Never fear,” says Gramps. “My great, great grandmother was one-quarter Native Bear and I am ready to share. Let’s eat!”

The problem with this kind of kid history, presented in the universe of beloved characters, is not just that it’s wrong, but that the nature of its wrongness is so hard to convey to its intended audience. Go ahead—try to explain why what I’ve described above is so bad and weird, when the child who’s listening isn’t old enough to have diddley-squat in the way of background knowledge, and has not yet figured out that some books aren’t to be trusted. You find yourself explaining what your understanding of the actual historical situation is, then returning to what’s on the page and pointing out why it’s a mess. You can’t help but add a bit about your understanding of why a writer might dwell on the idea of “freedom” in describing the meaning of Thanksgiving. (“You see, baby, it was all about resistance to the New Deal!”) By that time, the 4-year-old’s head is mashed potatoes and gravy, and you’re done for the day.

But are Gramps’ words going to take up residence in her mind, like those labeled shoeboxes did in mine? That’s why Austerlitz’s relatively gentle assessment of the Mikes—he writes, “There was hardly anything to take offense at in the new Berenstain Bears adventures,” though he points out that the new books’ religious turn meant that they had “abandoned their universalist appeal”—isn’t quite the end of the story. A book like this is more than exclusionary; it smuggles in ideology using a child’s beloved characters, like spinach baked into brownies.

As for our family, I tried solving the problem of this interloping Mike by taking Thanksgiving Blessings to my office. But every time J. visits, she goes directly to the shelf and looks for it, taking it down. “You hate this book,” she announces, opening it defiantly. Then, she insists that I read it. Again.