If I Could Use Gene Therapy to Cure My Manic-Depression, I Don’t Know Whether I Would 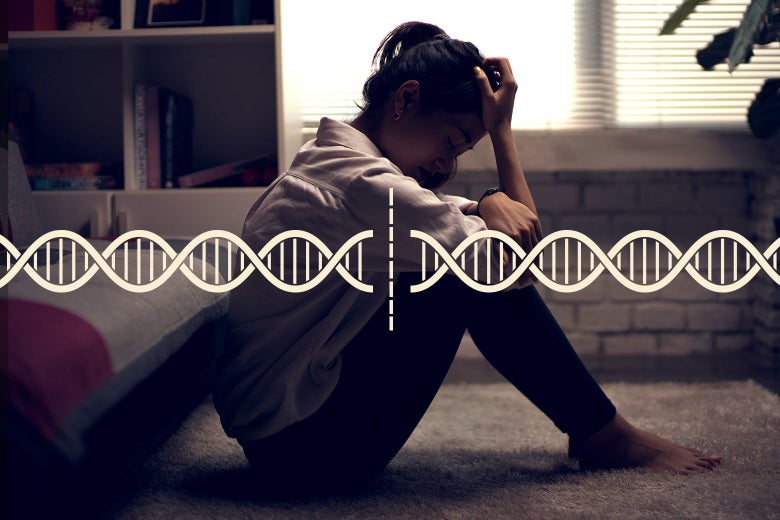 In the final chapter of her 1995 memoir of manic-depression, An Unquiet Mind, Kay Redfield Jamison posed a question that has stayed on my mind ever since: “I have often asked myself whether, given the choice, I would choose to have manic-depressive illness.” The question haunts me because I can’t answer it, either.

When Jamison first posed her question (if there were a cure for my mental illness, would I take it?), it seemed like pure speculation. But the question is no longer so hypothetical.

In June, the journal Nature Reviews Neurology published the results of a wide-ranging study of the genetic roots of manic depression. The study included 40,000 cases and identified a startling 64 genes associated with the disease. (In a clinical setting, the disease is usually referred to as “bipolar disorder,” though I’ve always preferred the more descriptive “manic-depression.”) Studies like this one are part of a burgeoning discipline known as molecular psychiatry, a field that studies the “biological mechanisms underlying psychiatric disorders.” Molecular biologists are also making progress in studies of major (unipolar) depression and schizophrenia. These discoveries and the explosion of gene-editing research, made possible by the gene-editing technique CRISPR, are on a path to intersect.

My first onset of mania, which occurred after I left home for college, was an awakening and an addiction, akin to taking a mind-altering drug. Proponents of psychedelics note that psilocybin fosters an intense connection with the natural world and a heightened awareness of underlying patterns that connect all living things. Michael Pollan describes this as a kind of antediluvian experience, a return to paradise before science and technology pushed us “toward the objectification of nature and of all species other than our own.” I, too, see grass sighing, hear messages in the rustle of branches, and feel myself at the center of a vast and shimmering web that I can destroy or repair with the lightest touch. I feel all-powerful, deeply connected to the world, crammed with insight. In the moment, it feels like a free pass to nirvana.

Recently, however, some of the genes that play a part in manic-depression have been discovered.

But the shadow side of mania is morbid depression. In my depressive episodes I worry obsessively about the death of my loved ones, and am unable to free myself of intrusive images of disaster. Pinned to the bed by depression, I cancel plans, struggle to recall what feeling feels like, and avoid leaving the house. Before starting medication, my relationships often crumbled in the face of sudden and inexplicable coldness. The worst experience, however, is the active destruction of mixed states. “Mixed states” of rapidly succeeding mania and depression, or sometimes both at once—agitated, rage-filled, wanting to climb out of my own skin—are extremely dangerous, partly responsible for manic-depressives’ high rates of suicide. Up to 60 percent of people with manic-depression will attempt suicide in their lifetime; suicide rates are 10 to 30 times higher than those of the general population. Without effective treatment, it can be a struggle to maintain loving relationships and steady employment. Without treatment, the fear of relapse is ever-present.

I started taking lithium for bipolar disorder when I turned 30, and the transformation was profound. The world receded a bit; I could breathe and escape from the clamor of my own mind for the first time in a decade. Lithium is considered the gold standard of treatment for manic-depression. It does not work for everyone, but for those of us who benefit, the effects can be lifesaving. Yet treatment resistance is also widespread. Lithium’s side effects include weight gain, thyroid and kidney problems, difficulty reading, a feeling of fuzzy-headedness that I would describe as having a wad of cotton stuffed in the front of my skull. Even the intended effects have their downsides: Lithium deflates the highs of mania, also reducing the boomerang effect of depression that typically follows a manic extravaganza. I owe my life to lithium, but sometimes it feels like being ejected from paradise.

Since the 1980s, scientists have been searching for the genetic root of manic-depression, to better understand it and treat it, and gene-editing technologies like zinc finger nucleases, or ZFNs, have been around nearly as long. The disorder has long been known to be “biologically based,” but that doesn’t mean the process as simple as finding the responsible gene. In monogenetic diseases, like sickle cell anemia, one gene is responsible for the illness. Manic-depression has no single cause. Environmental factors, such as poverty, race, class, gender, abuse, and other precarities, play a large role. Genes play a far smaller role, and there are at least 100 of them at play, interacting with one another and with environmental factors to manifest this complex disease. Recently, however, some of the genes that play a part in manic-depression have been discovered, and just as quickly as scientists are coming to understand the genetic roots of this disease, they’re trying to use that knowledge to treat it.

At the University of California–Berkeley, Fyodor Urnov is driven by questions once thought to be purely speculative. Urnov co-developed one of the earliest gene-editing technologies, ZFNs, and now is one of the directors of Berkeley’s Innovative Genomics Institute, founded by Jennifer Doudna, who recently won a Nobel Prize for her role in inventing CRISPR. Urnov’s research focuses on clinical applications for CRISPR, including ways it might be used to treat mental illness. “It’s a cliche to say mental illness is the final frontier,” he tells me over the phone, “but there you are.”

Currently, scientists are exploring CRISPR technology as a solution to chronic pain and as a treatment for monogenetic diseases.* Gene therapy for the latter is relatively simple—identify this gene and either “snip” it out or replace it. But the human mind arises from genetic instructions almost infinitely more complex. “More than 99 percent of the human genome doesn’t vary at all,” James Potash tells me when I ask him about the discovery of genes responsible for manic-depression. Potash is a researcher at Johns Hopkins and co-leads the Bipolar Sequencing Consortium. You have to look for the tiny fraction of genes where there is variation, a process Potash describes as “a million microscopic experiments on a platform as small as your hand.” Each of the manic-depressive genes discovered only increases the risk of illness by a tiny amount. Potash, therefore, remains skeptical about any promises that we will ultimately find a genetic cure for manic-depression.

But challenges facing those seeking a genetic cure for manic depression are not only technical but philosophical. This quest touches on the mind-body duality that has bedeviled scientists at least since Descartes. “The human mind is symphonic,” Urnov says. “Personality is extremely nuanced.” Any therapy for mental health must take into account the “multidimensionality of lived experience.” It is still unclear what this might look like, though what is clear is that it will be (at least initially) prohibitively expensive. If gene therapy for mental illness is a long way off, how long will it take to make such treatments accessible to all who need or want them?

But even if a cure is a long way off, CRISPR is already a powerful tool that can advance therapeutic treatments for mental illnesses. As Urnov puts it, we can finally move away from the “one hammer for every nail approach.” Right now, the Innovative Genomics Institute is working on using CRISPR as a “discovery tool” to illuminate how medications work in the brain, and to explain why they do not work the same for everyone. Before we start using CRISPR as a cure for mental illnesses, we can use it to vastly refine the way existing drugs work.

The process is like isolating each instrument in a symphony, then listening to every note it plays. The problem is you have to get your hands on some brain cells to gene-edit, and you can’t go around scraping cells off someone’s brain. Instead, researchers can take skin cells and transform them into brain cells. The process is called “reprogramming,” and Potash compares it to “taking a cell and immortalizing it.”

The complexity of diseases like manic-depression slows down the process, but that might be a good thing. To go slowly is to pay attention to the road, and how we get there matters. Gene editing must take into account a history of discrimination against people with mental illnesses, both cultural and institutional. The phrases experimental cure and mentally ill still conjure up images of forced sterilization and involuntary electroshock treatments. A recent article in the North Carolina Law Review reminds us that, in the 1920s, the Supreme Court ruled that a “feeble-minded” woman could be legally subjected to forced sterilization. Justice Oliver Wendell Holmes, writing for the majority, remarked “three generations of imbeciles are enough.” Today, people with mental illnesses tend to be a highly vulnerable population, and the combination of illness and economic pressure complicates questions of informed consent.

There are other moral implications as well. Currently, the United States and other countries ban genetic manipulation of germline cells (in humans, those are the sex cells that turn into either eggs or sperm). But it is possible that even editing non-germline cells can have long-term effects on the human genome. Doudna has spoken out against using CRISPR for germline editing, suggesting that only people past childbearing years should be allowed to edit their genome. But what about research being done in China and elsewhere on germline cells in human embryos? As with any powerful new technology, regulation often lags behind, and it becomes increasingly difficult to put the genie back in the bottle. The conversation becomes infinitely more complex when we are talking about making choices for our children, or for the human race as a whole. This conversation parallels concerns within the deaf community, where some have argued that eliminating deafness (though existing technologies like cochlear implants) is tantamount to cultural genocide. Conversations about treatment tend to take for granted that a disability must require a cure. We have the capacity, right now, to work toward greater acceptance and more compassionate systems of care.

When I look at my 6-year-old son, he seems like a cell paused on the brink of becoming. I am aware that I sometimes watch him too closely. I interpret—or try not to interpret—his actions as a fortuneteller might, wondering if I have passed along the genes for manic-depression. I worry, too, that by even writing these words I am stigmatizing him. Coming out as bipolar for myself is one thing, but doing so, I now realize, also casts a shadow on anyone who shares my genetic code.

If a genetic cure for manic-depression were possible in my lifetime, would I get it? Probably. Would I make that choice for my son? Probably not. Or possibly not. Manic-depression usually first expresses itself in your early 20s, a time when freedom to experiment and explore is considered not just a right but a duty. The intensity of my experiences during those years still burns brightly for me, and they are a central part of my identity as a creative person. Yet despair always rode along with me. I would spare him that, would give anything really to spare him that. But parents can’t spare their children nearly as much as we would like. In the short term, speaking more openly about mental illness and creating networks of financial, institutional and cultural support for people with cognitive and physical disabilities can still make a difference. So by the time a cure comes, who knows if we’ll still need it?

Correction, Sept. 24, 2021: This article originally reported that CRISPR technology is being used in clinical trials to treat chronic pain and monogenetic diseases. It is not in human trials for treating chronic pain.