In Portugal, There Is Virtually No One Left to Vaccinate 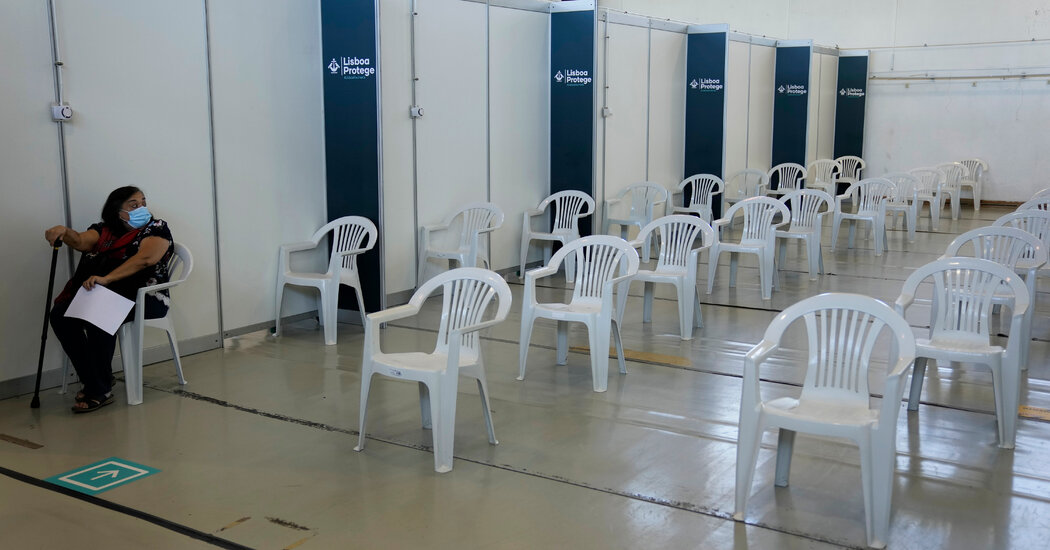 Portugal is among the most highly vaccinated countries in the world. Vice Adm. Henrique Gouveia e Melo, who led the campaign, said there was a key to his success: Keep politics out of it.

Portugal’s health care system was on the verge of collapse. Hospitals in the capital, Lisbon, were overflowing and the authorities were asking people to treat themselves at home. In the last week of January, nearly 2,000 people died as the virus spread.

The country’s vaccine program was in a shambles, so the government turned to Vice Adm. Henrique Gouveia e Melo, a former submarine squadron commander, to right the ship.

Eight months later, Portugal is among the world’s leaders in vaccinations, with roughly 86 percent of its population of 10.3 million fully vaccinated. About 98 percent of all of those eligible for vaccines — meaning anyone over 12 — have been fully vaccinated, Admiral Gouveia e Melo said.

“We believe we have reached the point of group protection and nearly herd immunity,” he said. “Things look very good.”

On Friday, Portugal ended nearly all of its coronavirus restrictions. There has been a sharp drop in new cases, to about 650 a day, and vanishingly few deaths.

Many Western nations fortunate enough to have abundant vaccine supplies have seen inoculation rates plateau, with more than 20 percent of their populations still unprotected. So other governments are looking to Portugal for possible insights and are watching closely to see what happens when nearly every eligible person is protected.

False dawns in the coronavirus pandemic have been as common as new nightmare waves of infection. So Portugal could still see a setback as the Delta variant continues to spread globally.

There have been worrying signs from Israel and elsewhere that protection offered by vaccines can fade over time, and a worldwide debate is raging over who should be offered booster shots and when.

Portugal may soon start offering boosters to older people and those deemed clinically vulnerable, Admiral Gouveia e Melo said, and he was confident they could all be reached by the end of December.

But for the moment, as bars and nightclubs buzz with life, infections dwindle and deaths plummet, the country’s vaccination drive has succeeded even after encountering many of the same hurdles that caused others to flounder.

The same flood of misinformation about vaccines has filled the social media accounts of the Portuguese. The country is run by a minority left-wing government, a reflection of its political divisions. And, according to public opinion polls, there was widespread doubt about the vaccines when they first arrived.

Admiral Gouveia e Melo has been credited with turning it around. With a background working on complicated logistical challenges in the military, he was named in February to lead the national vaccination task force.

Standing 6 feet 3 inches, the admiral made it a point to wear only his combat uniform in his many public and television appearances as he sought to essentially draft the nation into one collective pandemic-fighting force.

“The first thing is to make this thing a war,” Admiral Gouveia e Melo said in an interview, recalling how he approached the job. “I use not only the language of war, but military language.”

While politicians around the world have invoked a similar martial rhetoric, he said it was critical to his success that he was widely seen as detached from politics.

He quickly assembled a team of some three dozen people, led by elite military personnel — including mathematicians, doctors, analysts and strategic experts from Portugal’s Army, Air Force and Navy.

Asked what other countries can do to bolster their own vaccination efforts, he did not hesitate to offer his best advice.

“They need to find people who are not politicians,” he said.

Before the pandemic, Portugal was fortunate to have a robust national vaccination program. It grew out of the country’s devastating experience battling polio, which was still affecting the country after Admiral Gouveia e Melo was born in 1960. He recalls when the daughter of a family friend fell ill from the disease and the suffering that followed.

Manuela Ivone da Cunha, a Portuguese anthropologist who has studied anti-vaccination movements, said that “vaccine doubters and anti-vaxxers are in the minority in Portugal, and they are also less vocal” than they are in many other countries.

Leonor Beleza, a former Portuguese health minister who is now the president of the Champalimaud medical foundation, said Portugal’s rollout clearly benefited from the discipline stemming from the nomination of a military officer.

“He formulated a communications policy about what was happening that gave credibility and trust,” she said.

As the task force devised the most efficient system to safely stream the most people through inoculation centers, they used troops to build confidence in the system. People could see the vaccines were safe as soldier after soldier got shots.

At the same time, the task force made a point of showing doctors and nurses getting their shots, as well, to drive home the message of vaccine safety.

While other countries have featured doctors, nurses, police officers and soldiers in their vaccine campaigns, Admiral Gouveia e Melo said the consistency of the messaging was critical.

Still, as the campaign moved onto younger age groups over the summer — with less than half of the public vaccinated — there were signs that resistance was building.

In a submarine, the admiral said, you are in a slow ship trying to catch faster ships.

“You have to position yourself and be smart about how to do it,” he said, “and seize the opportunity when it arrives.”

In July, Admiral Gouveia e Melo seized such an opportunity.

Protesters were blocking the entrance to a vaccination center in Lisbon, so he donned his combat uniform and went there with no security detail.

“I went through these crazy people,” he said. “They started to call me ‘murderer, murderer.’”

As the television cameras rolled, the admiral calmly stood his ground.

“I said the murderer is the virus,” Admiral Gouveia e Melo recalled. The true killer, he said, would be people who live like it is the 13th century without any notion of reality.

“I attempted to communicate in a very true and honest way about all doubts and problems,” he said.

But not everybody welcomed his approach.

“We don’t really have a culture of questioning authorities,” said Laura Sanches, a clinical psychologist who has criticized Portugal’s mass vaccination rollout as too militaristic and called for it to exclude younger people.

“And the way he always presented himself in camouflage army suits — as if he was fighting a war — together with the language used by the media and the politicians, has contributed to a feeling of fear that also makes us more prone to obey and not question,” she said.

Still, the public messaging campaign — including an aggressive television and media blitz — made steady progress.

“In the beginning, we had some 40 percent who were unsure,” Admiral Gouveia e Melo said. Now, according to polls, he said, only 2.2 percent do not want the vaccine.

As he stepped down from the task force this week, the admiral said he felt the country was on a good course. But, ever the submariner, he cautioned that vigilance would remain essential to ensuring that this war was won.