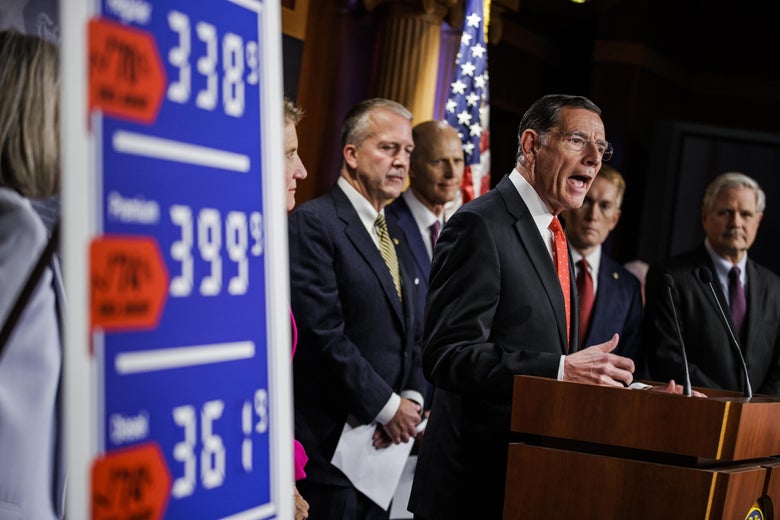 According to Gallup, a record 72 percent of adults think that now is a good time to find a job. But the share who believe the economy is getting worse—even though it can be considered pretty good on some measures—has steadily risen from 50 percent in June to 68 percent in October. Polling from the Associated Press and NORC at the University of Chicago shows a similar trend: Last month, 54 percent of individuals rated the economy as poor, up from 45 percent in September. In Virginia, where Democrats were crushed this month, 30 percent of voters in exit polls ranked “the economy” as the most important issue facing the state, ahead of more seemingly hot-button issues like schools or the pandemic.

Why are Americans feeling so sour when it’s so easy to find work? The most obvious explanation is that people are worried about inflation. On Wednesday, the Bureau of Labor Statistics reported that the consumer price index had risen 6.2 percent for the year, its biggest increase since 1990. Unsurprisingly, in a poll last month, two-thirds of Americans told Reuters and Ipsos that “inflation is a very big concern to me,” while the share rating it as the most important issue in the country has started to tick up in Gallup’s survey.

The exact factors driving inflation have morphed throughout this year. During the spring and summer, the cost of big-ticket items like used cars skyrocketed as demand from cash-flush Americans looking to spend down their stimulus checks bumped into limited supply. More recently, food, fuel, and shelter prices have been an important force. But in October, prices simply seemed to rise broadly across the economy, jumping by a shockingly large 0.9 percent for the month after seeming to cool down a bit in past months. Even when removing the effect of food, fuel, shelter, and used car prices, inflation still rose at a quick 0.6 percent pace.

Part of the reason people are so worried about inflation may have to do with saturation news coverage, especially on Fox News, which has used the topic as a cudgel to beat the Biden administration. But the bigger issue is likely just that people tend to notice when their paycheck isn’t stretching as far as it used to. They naturally get frustrated when groceries and gas become more expensive. Ditto when they discover that buying a car is going to cost them their firstborn child. And on the whole, prices have risen faster than wages recently: Average hourly pay is up 4.9 percent, more than a percentage point behind the CPI. Putting aside how the media may be shaping perceptions of inflation with sensational or just misleading stories, that split is a genuine problem. Given that job growth seems to have picked back up, it may in fact be the single biggest economic challenge facing the Biden administration right now.

And aggregate numbers only tell part of the story. When it comes to the race between wages and inflation, the middle class in particular is finding itself left in the dust.

This year, the job market has been on fire for lower-wage workers. Amid a nationwide labor shortage that has left retailers, restaurants, and hotels scrambling to hire, they’ve been able to notch big raises by hopping between employers. Among the bottom quarter of earners, median hourly pay is up about 4.9 percent for the year, according to the Federal Reserve Bank of Atlanta, which tracks pay for individuals over time. That means low-wage workers are the ones most likely to have kept up with inflation.

For the middle 50 percent of earners, meanwhile, wages are up less than 4 percent, while for the top quarter, it’s up less than 3 percent—well below the overall inflation rate.

You can see a similar pattern in this chart from University of Massachusetts Amherst economist Arindrajit Dube that zeroes in on just the third quarter of this year. For roughly the bottom 40 percent of workers, wages either matched or stayed ahead of inflation, on average. For the next 50 percent, wages lagged prices; many in that group didn’t see hourly pay grow at all.

There are still lots of reasons to believe that this bout of inflation is only a temporary issue related to the pandemic and the government’s response, which will eventually die down on its own. Certainly, that’s the view that still dominates at the Federal Reserve. As Chair Jerome Powell recently put it, “The current inflation spike is really a consequence of supply constraints meeting very strong demand, and that is all associated with the reopening of the economy, which is a process that will have a beginning, a middle and an end.”

At the same time, nobody really knows how long “temporary” will last, and as the polling suggests, Americans don’t seem to be taking much comfort in the message that all of this is just a momentary bump in the road back to normalcy. Instead, they’re noticing the price of milk rise—or discovering they’ll practically have to part with their firstborn child in order to purchase a used Honda—and are justifiably unhappy about it.

Democrats can take moral solace in the fact that poorer Americans, who are typically the last to benefit from an economic expansion, have been the biggest winners of Biden’s almost-year in office. Some of the the president’s policies—like the round of stimulus checks the government sent out in the spring and the new monthly child tax credit payments—have also eased a lot of the financial pain that families would have felt from rising prices.

But inflation is ultimately devouring a lot of the gains families would have otherwise enjoyed, if not leaving them outright poorer than they were a year ago, and the situation may be worst for the middle and upper-middle classes, who make up the bulk of voters in midterm elections. It’s not obvious that inflation will keep up this pace next year. But it’s also not hard to guess what will happen to Democrats in 2022 if it does.