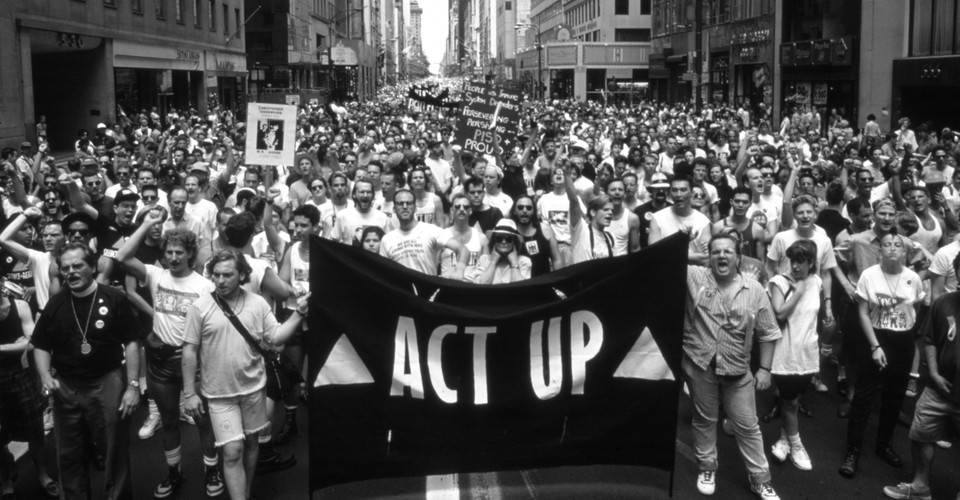 For an outstanding chronicle of the early years of AIDS activism, look no further than Sarah Schulman’s Let the Record Show: A Political History of ACT UP New York, 1987–1993, which is also an exemplary model for telling a more complete story of a political movement. In writing Let the Record Show, published earlier this year, Schulman has orchestrated a people’s history of ACT UP New York. Her voice and those of a chorus of activists cohere in the book, which draws both on her experience as a veteran of the political-action group and from lengthy interviews she conducted with nearly 200 other members. The result is an expansive portrait of the people, principles, and campaigns that made ACT UP the most formidable political organization to emerge from the AIDS crisis.

The history of ACT UP, Schulman writes in the book’s introduction, “is the story of a despised group of people, with no rights, facing a terminal disease for which there were no treatments. Abandoned by their families, government, and society, they joined together and forced our country to change against its will.” These activists’ work saved—and will continue to save—countless lives, she writes, even if many of them lost their own lives to AIDS: “The dead and the living ultimately transformed the crisis.”

As Schulman emphasizes, ACT UP was born out of dire emergency. From 1981, when the disease was first reported in the national press (though undiagnosed cases likely existed even earlier), to 1987, the year ACT UP was founded, thousands of Americans had died of AIDS-related complications. Their illness and death were shrouded in shame and sensational media coverage. Although by 1987 the modes of HIV transmission had been properly identified—and the initial medical designation gay-related immune deficiency (GRID) had officially been changed to acquired immune deficiency syndrome—AIDS was still widely believed to be a gay disease. It was commonly dubbed “gay cancer” and “gay plague” at a time when sexual minorities faced vicious forms of legal discrimination and extralegal violence.

Amid a growing calamity, queer communities had to fend for themselves to ensure their survival. ACT UP was one such response, as Schulman puts it, “simultaneously a place of decline and a place of defiance of loss.” Unlike other AIDS organizations that preceded it—for instance, Gay Men’s Health Crisis, largely a health and social-support service—ACT UP was, and continues to be, an altogether political entity. The AIDS Coalition to Unleash Power, its motto declares, is “a diverse, non-partisan group of individuals, united in anger and committed to direct action to end the AIDS crisis.”

ACT UP had a radical organizational structure whereby power was distributed horizontally, not vertically. “There was no hierarchy. There were no paid officials. There were no offices,” Schulman writes in Let the Record Show. What held the group together, as she brilliantly captures, was a diffuse and democratic amalgamation of numerous committees, caucuses, and affinity groups, working independently on smaller campaigns and in unison on larger ones. This unique configuration enabled “simultaneity of action, not consensus” and also ensured that major decisions were made collectively at ACT UP’s weekly Monday-night meetings at the Lesbian and Gay Community Services Center in New York City (and later at Cooper Union to accommodate the growing attendance, which reached 500 to 800 people at the organization’s height). Garance Franke-Ruta, one of the many activists we hear from in Let the Record Show, recalls these meetings: “I experienced direct democracy in ACT UP in a way that is so rare in American life … Everyone had a vote. And everyone was equal, and everyone had a voice.”

The group’s formative days come alive in Let the Record Show, which draws from the ACT UP Oral History Project, a collection of interviews with 187 members that Schulman and the activist and filmmaker Jim Hubbard conducted from 2001 to 2018. These voices relay the group’s political history in personal terms. “When I walked into the room at the Center it was like a religious experience,” Moisés Agosto-Rosario says. “Coming from not having people to talk to, to a bunch of fired-up people really wanting to make a difference, fighting for their lives literally. I could relate to them.” Kendall Thomas remembers: “The sex-positive, gay-affirmative, politically empowering force that was in that room and that [was] in the streets of New York or DC at ACT UP actions—I do feel it saved my life. And there was some great sex that came out of it, too.” Recollections like these make palpable how ACT UP furnished not only a viable political space but also a vibrant communal culture. As Jim Eigo puts it, “I’ve always believed in community and ACT UP, during those two or three years of its height, is the most splendid enactment of the idea of community I’ve ever been a part of.”

The lifeblood of ACT UP was nonviolent civil disobedience, the means by which the group began to sharpen its principles and shape its identity. Imbued with desperation, rage, courage, and creativity, ACT UP’s actions brought new dynamism to old repertoires of civil disobedience.

For instance, although “die-ins” and public funerals were not new forms of protest, ACT UP used them in highly evocative ways. At mass demonstrations, activists would stage a die-in by lying still on the ground, sometimes with cardboard cutouts of tombstones emblazoned with messages such as NEVER HAD A CHANCE. And as activists began to die in large numbers, ACT UP held several funeral processions both as acts of commemoration and to concretize the mass deaths the public refused to acknowledge. Haunting in their power to embody the unfolding tragedy, political funerals issued a striking indictment of the public: “Here is a loved member of our family who has died; we want to show you. This is his body—and you killed him,” the interviewee Russell Pritchard says, remembering a political funeral for the fellow member Mark Lowe Fisher that the group carried out in the streets of New York.

ACT UP’s feats were extraordinary, especially given its relatively small size. As Schulman amply documents, campaigns targeted the entire HIV/AIDS infrastructure: pharmaceutical companies, government health agencies, media outlets, and many other institutions and individuals holding the levers of power. Some of the campaigns recounted in Let the Record Show have since become legendary. For example, ACT UP disrupted the New York Stock Exchange, days later forcing the pharmaceutical company Burroughs Wellcome to slash the price of the anti-HIV drug AZT by 20 percent.

With mass demonstrations, the group seized control of the headquarters of the U.S. Food and Drug Administration and then that of the National Institutes of Health, compelling the FDA to expedite the approval of experimental drugs and the NIH to adopt research protocols that activists helped design. ACT UP disrupted Sunday Mass at Saint Patrick’s Cathedral, calling out the Catholic Church and in particular Cardinal John O’Connor, then the archbishop of New York, for their anti-abortion, anti-safe-sex, and anti-gay positions. No matter the person or institution, the group’s position was, as the activist Maxine Wolfe recalls, “If you do things that have public policy implications, I don’t care where you are, I’m going to come and get you, and you can’t hide behind the church.”

Let the Record Show documents lesser-known campaigns that were also significant to ACT UP’s mission and success. The group championed the plight of homeless New Yorkers with HIV/AIDS and began a needle-exchange program in the city. It waged a four-year campaign that forced the Centers for Disease Control to expand its definition of AIDS to include opportunistic infections that affected HIV-positive women. The latter was one of ACT UP’s signal achievements, enabling women with AIDS to receive disability benefits and ensuring their inclusion in future clinical trials; Schulman offers an illuminating behind-the-scenes view of these different campaigns.

The book is a significant departure both from the popular perception of ACT UP as an exclusively white, gay, male organization, and from other well-known representations of the group—including the critically acclaimed documentary film How to Survive a Plague. Unlike many of these works, Schulman’s book foregrounds women and people of color and their less-heralded but equally heroic work (the book’s first chapter, for instance, features members of ACT UP’s Latino Caucus and a major action they carried out in Puerto Rico). Schulman writes that “ACT UP was predominantly white and male. But its history has been whitened in ways that obstruct the complexity.”

A through line in the book, in fact, is a crucial look at ACT UP’s gender and racial dynamics. Schulman describes how privilege enjoyed by white male activists allowed ACT UP to enter the halls of power and negotiate with pharmaceutical executives and public-health officials in ways that women and people of color could not have done in 1980s America. She also lays bare the internal divisions that grew within ACT UP—between activists working on the inside bargaining with the establishment and those on the outside staging direct actions; between those who wanted to focus the group’s energies on drug treatment and those who wished to pursue a broader social-justice agenda—divisions that would lead the group to split into two in 1992. (Because Let the Record Show centers only on the group’s early years and on “the mother ship,” the New York chapter, it’s worth noting that ACT UP continues its work today and has several active chapters in the U.S. and worldwide.)

Let the Record Show documents a history that’s now more than 30 years old, not to mention a legacy of resilience and heroism. But it’s written neither nostalgically nor triumphantly. Schulman writes as a witness to and a survivor of a catastrophe, clear-eyed and committed to remembering the dead. Interspersed throughout the book are more than a dozen moving vignettes titled “Remembrance” that pay homage to individual ACT UP members who died of AIDS. Schulman also writes with the intention to empower and guide today’s activists with lessons learned from the early days of ACT UP. As such, Let the Record Show serves as both history and handbook of how a small coalition can achieve fundamental political change.

At the very outset of the book, Schulman states firmly that “AIDS is not over.” She reminds us that as of 2019, more than 700,000 people had died of AIDS-related illnesses in the United States, including about 16,000 in 2017 alone. Although the current reality of AIDS is beyond the purview of Let the Record Show, Schulman asks us to read the book being mindful of a crisis that continues to exact its toll today, and to look back at ACT UP’s past with a renewed feeling of purpose and possibility for the future.

As someone who’s lost friends and family to AIDS, I could not help but read Let the Record Show with a sense of personal anguish, knowing full well that many thousands died—and continue to die—because of hatred, neglect, greed, and malfeasance, which transformed the epidemic into a disaster. There were a number of days while reading this book when my mind would trail off to remember not just my immediate kin but also kindred spirits such as Melvin Dixon, Essex Hemphill, Marlon Riggs, Assotto Saint—visionary artists who died of AIDS-related illnesses and profoundly shaped my sense of self as a Black gay man. There were other days, too, for different reasons, when the book in my hands would resonate with incredible force. As I was reading, my daily afternoon alarm would go off, reminding me to take my HIV medication, and I would be hyperaware of my aliveness and enormously grateful for the sacrifices and achievements of ACT UP.

Let the Record Show is not an easy read, given that it tells a story of incalculable suffering and loss; and yet it’s an invigorating work, for it also documents uncommon courage and defiance. Schulman has written a necessary book that expands our vision of AIDS activism and demands us to remember the living and the dead who made ACT UP an indispensable political and cultural force.