The British comic legend calls the world ‘terminally insane’ for NFTs while announcing the auction of his own NFT art. 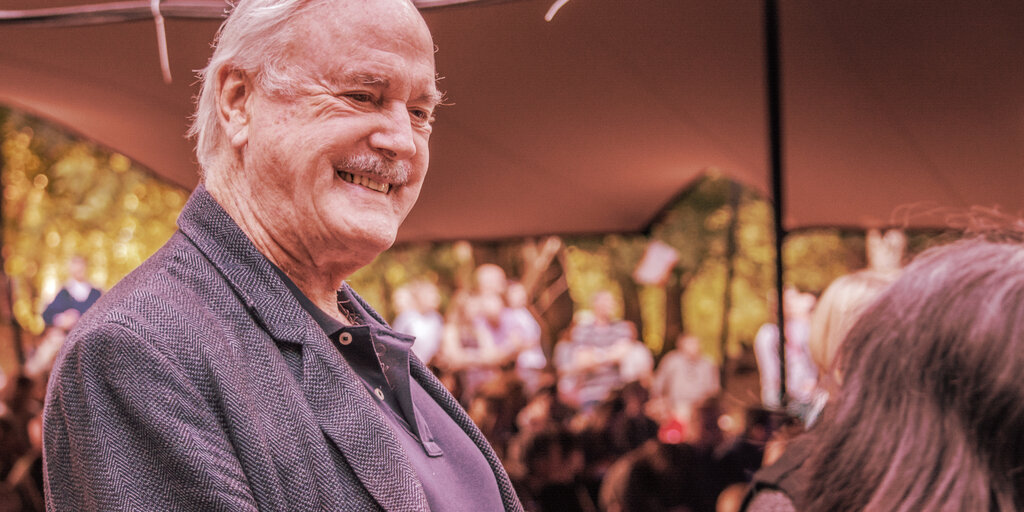 British thespian and comedy writing legend John Cleese is the latest celebrity to mint an NFT. The auction for his ‘Brooklyn Bridge’ NFT, a landscape sketch which he drew on his iPad, is now live on NFT marketplace OpenSea, where a bid of $50,000 dollars has already been made by an eager collector named Cerwyn.

Cleese’s NFT could be poking fun at the fact that earlier this week, an NFT called ‘Bridge for sale’ was also listed for auction on OpenSea by its creator gcp-nyc. The NFT, currently worth $27, is a Google maps view of Brooklyn bridge, a reference to an American con artist George C. Parker, who was notorious for his often successful attempts conducting sales of New York landmarks like Madison Square Garden, the Statue of Liberty, and Brooklyn Bridge.

The buy-it-now price is a not-so-subtle nod to Beeple’s magnum opus ‘EVERYDAYS: THE FIRST 5000 DAYS’. Beeple made an image every day for 5000 days and turned the whole collection into an NFT, which sold at auction via Christie’sfor an unprecedented $69.3 million to NFT whale Metakovan.

Other high-profile NFT creators have come out of the woodwork recently to collect huge sums for their digital art.

On March 1st, auctions concluded for electro-pop singer/songwriter and producer Grimes’s first foray into NFTs. Her debut collection of digital images netted her a sweet $6 million.

What’s the buzz about NFTs?

Since the advent of Ethereum, artists have been drawn to the NFT world as a way of selling their artwork digitally. How does it work? Thanks to Ethereum’s blockchain technology, which allows for the creation of smart contracts, artists can mint non-fungible tokens (NFTs) from their creative works.

Because of the fancy cryptographic nature of Ethereum’s distributed ledger, these NFTs are a form of verifiable digital scarcity. This means that if an artist creates a totally unique one-of-a-kind digital image, they can specify its uniqueness on the blockchain’s indelible distributed ledger. The sale of the unique NFT is then recorded on the ledger, transferring ownership of the one-of-a-kind NFT to its purchaser.

Although traditional art acolytes may bemoan visual art’s increasing march into intangibility, there are certain material benefits that come with blockchain technology. Thanks to smart contracts, artists can even get an automatic commission on the future resale of their art, ensuring income long after the initial sale has been concluded.

How does Basil Fawlty fit into this?

In the tweet announcing the work, Cleese shared a promotional video where he makes several disingenuous and tongue-in-cheek remarks about crypto.

“Hello, I’m not gonna tell you my name because all you need to know about me is that I’m a young unknown digital artist or a collective of artists,” he said, poking fun at the anonymity and pseudonymity that pervades the crypto community. He then turned the satire onto the language of crypto itself:

“You and me we get it. Our parents laugh at non-refundable tokens and cryptic currencies. ‘It can’t go on the wall!’ they say. ‘Is the world ending?!’ No, hardly.”

Cleese also spoke with Vanity Fair about the auction, saying that “the world has gone terminally insane. This all reminds me of Henry David Thoreau, when he said, ‘Our inventions are wont to be pretty toys, which distract our attention from serious things. They are but improved means to an unimproved end.”

So Cleese is trolling the cryptoverse.

What’s definitely not a joke, however, is that $50k offer.

How Amazon helped create an America in despair

Why Trump’s social media network will be an epic failure