No Bird Wants to Live in a Murder Nest 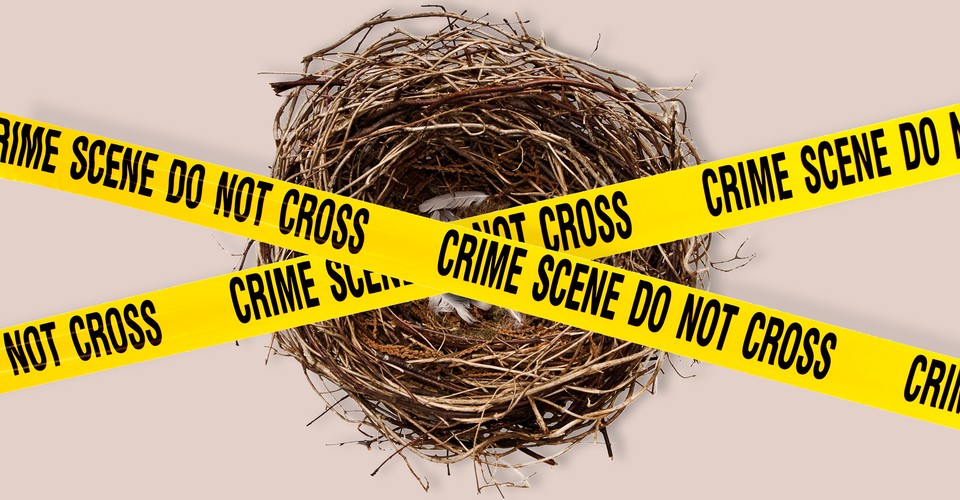 In the spring of 2019, the biologist Tore Slagsvold headed into the forests outside Oslo to stage a series of tiny crime scenes. He didn’t need bullets, or bootprints, or even bodies or blood; only a handful of plush, white feathers.

Slagsvold’s audience was avian—the region’s blue tits and pied flycatchers. And with any luck, his faux, fluffy evidence was going to scare the bejesus out of them. He set up several nest boxes and scattered the feathers inside, and just as he hoped, the birds balked. They were, Slagsvold told me, afraid of the feathers, or at least what they seemed to represent: fresh violence, a predator on the loose, the possible remnants of a sharp-toothed weasel’s afternoon snack. The likely fate that awaited them, should they dare enter such an accursed abode.

The danger, of course, wasn’t actually real. “The key word is deception,” said Slagsvold, of the University of Oslo, who’s been studying birds for some 50 years. The ruse sounds mean. But Slagsvold’s experiment, published in a study out today, was a perfect pantomime of the clever lies he thinks the animals tell one another in places where nest sites are scarce. They essentially fake their own death, he argues, painting a portrait so horrific that it disincentivizes their rivals from taking over the home they have painstakingly built. In much the same way that a grisly murder can crater the property value of a house, stray feathers spoil an alluring cavity’s appeal. The birds manipulate the real-estate market to their benefit.

Slagsvold cooked up the “fear of feathers” hypothesis a few years ago, in partnership with Karen Wiebe, his frequent collaborator at the University of Saskatchewan. Both have spent years studying tits, flycatchers, and other birds that lay their eggs into cavities in trees, stumps, walls, and even human-forged boxes. They’ve documented the great lengths to which expectant birds go to keep their cavernous properties safe. Truly choice holes are rare, “so there’s this intense competition for them,” Wiebe told me. Birds will sometimes come to blows, parrying with their talons and beaks. Even after a bird claims a cavity, it has to stay vigilant: Saboteurs abound—and there’s always a chance that a passerby, of its own species or another, will try to commandeer the lease. Flycatchers are particularly famous for this. Each spring, they fly north from Africa to settle in their seasonal European homes; weary from their journey and eager to breed, many of them boot other birds from their freshly furnished apartment. They’ll even construct nests on top of other nests that have already been filled with eggs.

Current tenants don’t have many options to waylay lurkers. Some of them can police their nest’s entrance hole, but prepping for parenthood is hungry work, and eventually the birds have to take leave to forage for food. So Slagsvold and Wiebe started to poke around for alternative home-defense systems that the birds might be using for unattended nests.

The key turned out to be feathers, which have long been known to ornament many cavity-loving species’ nests. The fluff could conceivably help the birds keep their nest warm, but in practice, that doesn’t seem to be how these particular birds are using them, Slagsvold said: Blue tits, for instance, will gussy up the top of the nest, rather than weaving the feathers in—the more standard insulation technique. Wiebe, who works with tree swallows in Canada, also noticed some of her birds dumping feathers into nest boxes before they had started gathering other building materials such as grass. “They were white, and often conspicuous,” she said, as if the birds were trying to send a message.

Slagsvold and Wiebe decided to parse the feathers’ import. Working separately but simultaneously in Europe and North America, the pair erected dozens of nest boxes dressed with accoutrement—some feathery, some not—and set up video cameras to tabulate how tits, flycatchers, and swallows might react. Across continents, the birds were most eager to enter feather-free boxes, sometimes flitting inside just seconds after approaching them. But the would-be interlopers froze at the sight of white feathers, sometimes dillydallying outside the structures for an hour or more. Three stray bits of fluff were all it took to startle the birds, though some were even warier when there were six. Black feathers spooked them less than white ones did, perhaps because they were harder to see in the dark interior of the box; the birds were also unfazed by squares of white paper. “It really seems like it’s white feathers—not just white, not just feathers,” Stepfanie Aguillon, an evolutionary biologist at Stanford who wasn’t involved in the study, told me.

The downy smattering was never a slam-dunk deterrent. Although some of the birds in the study were too anxious to ever enter white-feathered nest boxes, most eventually went inside. But even a brief delay can make a huge difference for the nest’s true owner, usually foraging only a short distance away. “Even 20 minutes can give them enough time to circle back and check in,” and perhaps fight off their competitors, Wiebe said. The researchers weren’t actually able to show that happening, because they relied on artificially decorated, already uninhabited nests, Aguillon pointed out. But their findings point to a serious feather fear factor that hadn’t been shown before. The birds’ trepidation almost evokes a kind of superstition, she said: “Something bad happened in this place. I should not go in.”

Such histrionics over a few feathers might seem a little extra, but it’s pretty in keeping with the high-stakes lifestyle that many birds lead, Mark Mainwaring, an ecologist and bird-nest expert at the University of Montana who wasn’t involved in the study, told me: “All these birds have to do is make one mistake, to go into a nest box with a predator, and they’re dead.” That’s a lot of incentive to avoid risk—and from birds’ perspective, even a soft, floofy hint that death looms in the dark is plenty of reason to seek their fortune elsewhere. Human squatters, too, would probably think twice before bedding down in an apartment with hair, teeth, and shreds of torn clothing strewn about. “It’s all part of the bluff,” Mainwaring said. Feathers might not even be the only death decoys that duplicitous birds toss around. Other researchers have documented tufted titmice—another species of cavity-nesters—filching fur from raccoons, dogs, and other mammals to line their nests. The stolen fuzz might end up pulling double duty: coziness and psychological warfare that keeps invaders out.

Sophie Edwards, an ornithologist at the University of St. Andrews who wasn’t involved in the study, pointed out that murder-phobia might also thwart another avian dirty deed—egg-dumping, wherein some birds offload part of their brood into other nests, so they can avoid the onerous responsibility of raising their offspring themselves. For some avian populations, dissuading egg-dumping might even be more important than blocking nest thievery. The blue tits that Edwards studies in the United Kingdom, for instance, don’t start feathering their dwelling until about two weeks into the nest-building process, too late to stop most early intruders but perhaps better timed to when the birds start incubating their eggs. The tactics aren’t mutually exclusive, but researchers won’t be able to tell which one’s the bigger motivator until they track which broods survive, and whether strategically placed feathers helped secure their fate.

In either case, that the deception works at all is telling. Humans aren’t the only calculating tricksters around—or, it seems, the only animals that can weaponize fear. Birds are terrified of death too. On some level, they seem to know this about one another. And like us, they can exploit that reality to safeguard what’s theirs.