On 30, Adele Holds Back the Waterworks Unlike Ever Before 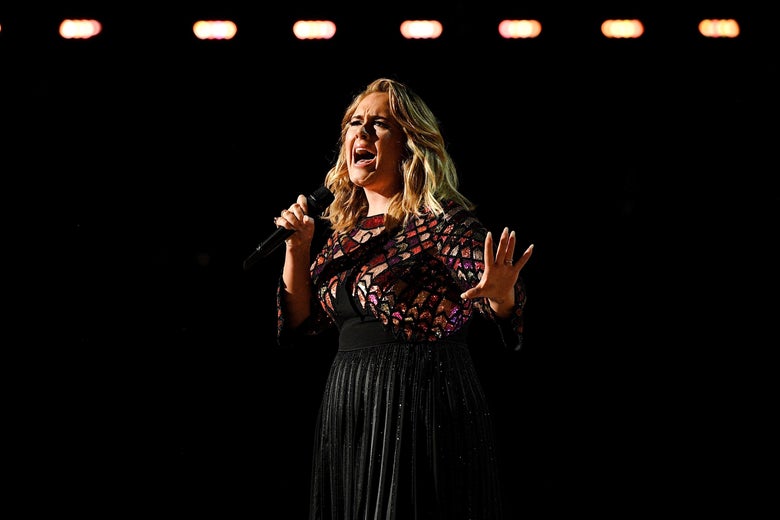 The last time Adele Adkins released an album, 2015’s 25, Donald Trump had not yet become the U.S. president. The singer’s British homeland had not yet held its Brexit referendum. George Floyd was still alive. So was Queen of Soul (and eventual Adele cover singer) Aretha Franklin. Back then, 19 was just the title of Adele’s 2008 debut album, not the date tag to a disease called COVID that would become a global pandemic.

In 2015, music was just coming out of a long stretch dominated by upbeat dance-floor-diva self-empowerment hits. Beyoncé’s Lemonade was still months away, though it would end up competing with (and, to Adele’s own loudly declared displeasure, losing to) 25 at the Grammys. The presence in the field of a young throwback belter, whose songs were notorious for making listeners en masse break down in tears, remained enough of a novelty to be comedy fodder.

Soon after, though, the world at large became conspicuously sadder and more painful, and pop shifted into lower gear. In hip-hop, “emo rap” and “sad trap” were the lachrymose flavors of the day; elsewhere, “sad girl indie” artists such as Phoebe Bridgers had mainstream breakthroughs, helping prompt Taylor Swift to pivot back to sepia-toned balladry. When Olivia Rodrigo’s power-bawling Gen Z ballad “Driver’s License” became a smash early this year, Saturday Night Live tried to repeat the premise of its 2015 Adele cry-along sketch, but it felt much more shrug-worthy: Sure, pop music is full of sounds people love weeping over. What’s your point?

Some observers arched eyebrows, then, when Adele seemed to imply in a pre-album-release interview this week that she could claim for herself the job of making mature emotional music while the rest of pop was preoccupied with churning out goofy geegaws for TikTok. Didn’t she know that tearjerkers like Rodrigo can trend on that platform nearly as intensely as Simon-says dance crazes? At that point, the only song most of us had heard from new album 30 was its lead hit single, “Easy On Me.” While somewhat more subdued than past rafter-shakers like “Hello,” it mostly seemed ripped right out of the familiar Adele playbook. Perhaps the return of pop’s Duchess of Distress, however welcome to her countless multigenerational fans, was going to seem rather redundant. As the album that follows her divorce from the father of her son Angelo, 30 could prove to be one trip too many to the well of heartbreak that’s served as the main theme of her records to date, with diminishing musical benefit by the time 25 came along.

There are a few such moments of tedium on 30, particularly for me on the nearly seven-minute penultimate track “To Be Loved.” It finds Adele offering one of her most committed and nuanced vocal performances ever to a song whose heavy-handed run-on harangue doesn’t remotely merit it. (It’s a co-write with Tobias Jesso Jr., whose contribution to 25 I also considered a dud.) Overall, however, far from another mere rebottling of Essence of Adele, 30 turns out to present an invigorating series of unpredictable musical choices, though none so far-out as to alienate her loyal legions. While there may not be any musical juggernauts here on the scale of 21’s “Someone Like You” and “Rolling in the Deep,” taken as a whole, it’s Adele’s most thoroughly satisfying and rewarding full-length.

30 finds her leaning less heavily on the retro-soul gestures that have been the core of her sound, which can smack of too-convenient cultural appropriation in inverse proportion to the labored vocal technique. On the 1970s Elton John-style piano-monologue “I Drink Wine,” she sings, “I hope I learn to get over myself/ Stop tryin’ to be somebody else,” and this album marks a major step in that direction. Adele here has also realized that the best singing is not necessarily the most singing  and stops lunging for the most direct vocal pipelines to the waterworks.

In the place of exhausting, crescendo-ing calisthenics, the emotional intimacy of 30 comes mostly from the music’s convincingly lived-in feel, as well as a more generous share of the playfulness for which this North London dame is known in person. A song like “Cry Your Heart Out,” for instance, might speak lyrically of desperation and emotional catharsis. But the potential self-seriousness is undercut, almost mocked, by the jaunty groove and the artificially processed, almost chipmunk-y grain of Adele’s own background vocals—a trick repeated in many places on this album, recalling vocal-funk jesters from Zapp and Funkadelic to Daft Punk to cyborg-popsters like Britney Spears. It’s like a 21st-century version of Lesley Gore’s insouciant musical melodramas in the 1960s, albeit with a dub-reggae production twist.

On the opening track, “Strangers by Nature,” as well as mid-album mood piece “All Night Parking (With Errol Garner) Interlude” and, most enthrallingly, the closer “Love is a Game,” Adele draws on the pre-rock-and-soul strains of Tin Pan Alley jazz-pop and movie musicals. Perhaps this turn is an outcome of her relocation to Los Angeles, yet she also comes by those sounds organically—for instance, via British pre-Beatles nightclub singers such as Shirley Bassey, Cilla Black, and Sandie Shaw, whose collective legacy was evoked recently in Edgar Wright’s retro-thriller Last Night in Soho. But where those torch-song bearers tended to sing masochistically about the wrongs their lovers inflicted upon them—as Adele herself has done on past hits—here she flips the form to deal with being the one who’s made the choice to quit a relationship, and then has to cope with the aftermath. As she sings on the chorus of “Love is a Game,” “I ain’t fooling/ What a cruel thing/ To self-inflict that pain.”

That song is a collaboration with the producer Dean Josiah Cover, a.k.a. Inflo, as are two other highlights of the album’s second half: the quietly seething “Woman Like Me” and album centerpiece “Hold On.” Inflo is also the impresario behind the brilliant and enigmatic London political-musical collective Sault, who’ve put out several of the best albums of the past couple of years, and his singular sense of pacing and minimalist tone-coloring is recognizable here. As capable and wide-ranging as Adele’s prime collaborator Greg Kurstin proves on most of the album, I can’t help imagining that 30 might be even more potent if Inflo’s touch was on more of it.

What has me feeling most torn, though, are the samples of voice-memo diaries as well as recorded conversations with her nine-year-old son about her divorce on the otherwise sinuous, stirring, Sade-esque “My Little Love.” It’s a device Adele’s borrowed from hip-hop artists such as Tyler the Creator and (rumored ex-boyfriend) Skepta, and it quenches the social-media-age thirst for behind-the-scenes glimpses of the artist’s personal life much more than the often-reclusive Adele is usually inclined to do. Another way of looking at the voice notes would be as maudlin, grossly performative (and in the case of her son, arguably exploitative)  manipulation on the level of the artist-commissioned, highly staged “tell-all documentaries” that are rife in the pop marketplace at the moment. The kind of emotional manipulation, that is, that Adele songs have often been stereotyped as commodifying.

Still, given how expansively engaging 30 turns out to be otherwise, I’m determined to restrain my knee-jerk impulses, just as Adele has restrained her tear-jerking ones.