Last quarter, the world settled into a ~new normal~

If the first two quarters of the year meant us coming to terms with a global pandemic, Q3 saw us settling into a ~new normal~ of face masks, parking lot dining, and saying “whoops, sorry!” whenever you got too close to someone at Costco.

Whether you want to relive summer 2020 or would rather pretend it never happened, we present: the Brew’s third quarter recap.

After schools across the country closed their doors in the spring, John Krasinski hosted virtual prom, graduation ceremonies were streamed online, and at least one student accidentally said, “Sup, b****?” to their Zoom class. This quarter, students made their way back to school—some online, some in-person, and some in nearby parks.

A few weeks into the semester, we’re starting to learn more about mass education during a pandemic: for children, for working parents, and for the college towns that depend on campus life to fuel their economies.

Universities have historically been sheltered from off-campus downturns like recessions, but it turns out they’re not pandemic-proof. Many that welcomed students back to campus have become Covid-19 hot spots in just a few short weeks, while those that embraced online learning opened an economic hole in their surrounding communities. In true 2020 fashion, it’s a lose-lose.

There’s actually good news. Coronavirus spread at K-12 schools is more limited than what some colleges are experiencing, according to a two-week Brown University study. Confirmed infection rates were less than half of one percent for teachers and half that for students.

Even where students can attend school, many parents have chosen not to enroll them. Lower enrollment = less funding = staff layoffs and program cutbacks. And for working parents, especially women, students Zooming into class means they stay home, too—leading to an invisible labor crisis.

Looking ahead…in the long-term, lost learning time could cost the U.S. economy an estimated $14 trillion, according to an OECD report. For colleges, some predict a reckoning is coming for already-low-funded schools and college towns that are “too dependent” on campus life.

That was a lot. Here’s some dog ASMR. 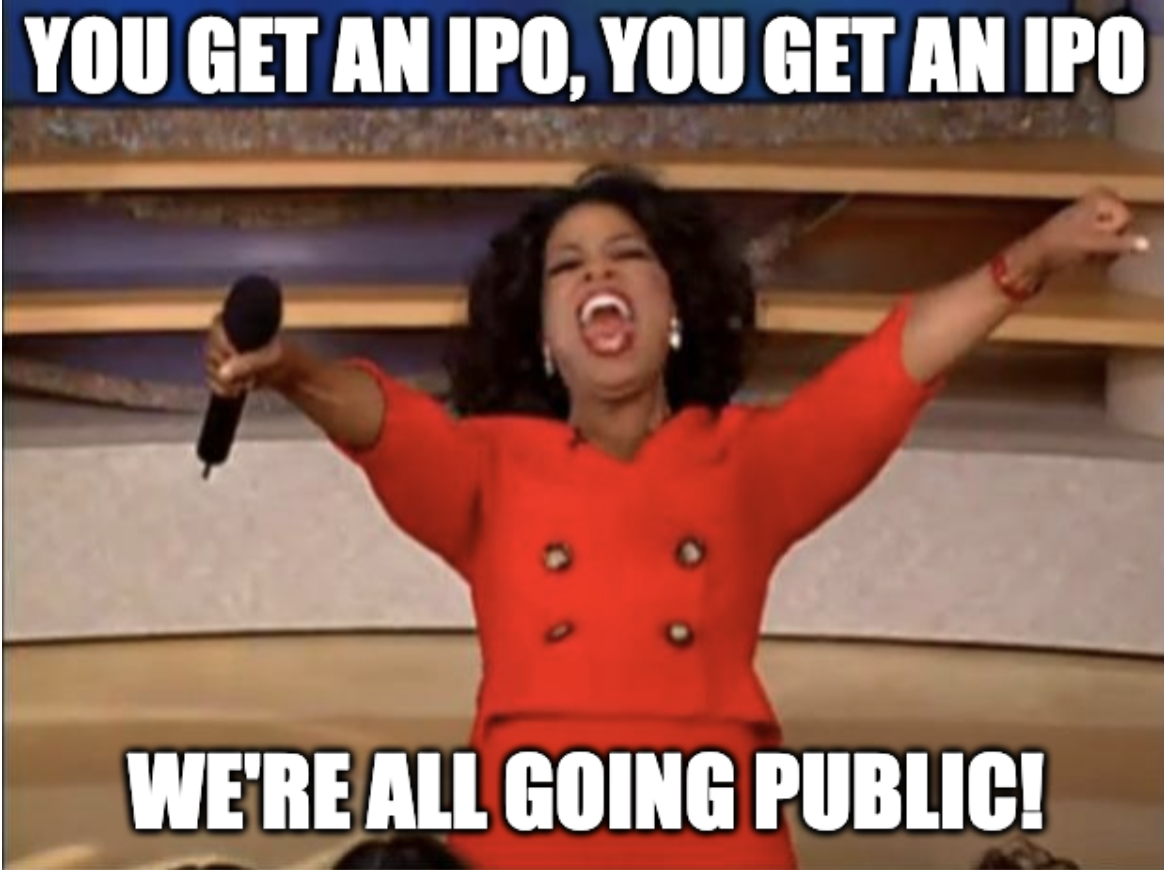 Despite prohibitions on the universal gesture of dealmaking—firm handshake, closed-lip smile—the transaction biz soared in Q3.

Resurgences in dealmaking are common after periods of economic contraction, but the current shopping spree far outpaces the M&A activity following the 2008 financial crisis.

So why are biz leaders wearing out DocuSign?

The election, for one. Some execs are worried about a) whipsaw volatility in the case of a contested result or b) higher capital gains taxes under a President Biden. They’re trying to wrap things up before Nov. 3 to avoid either. 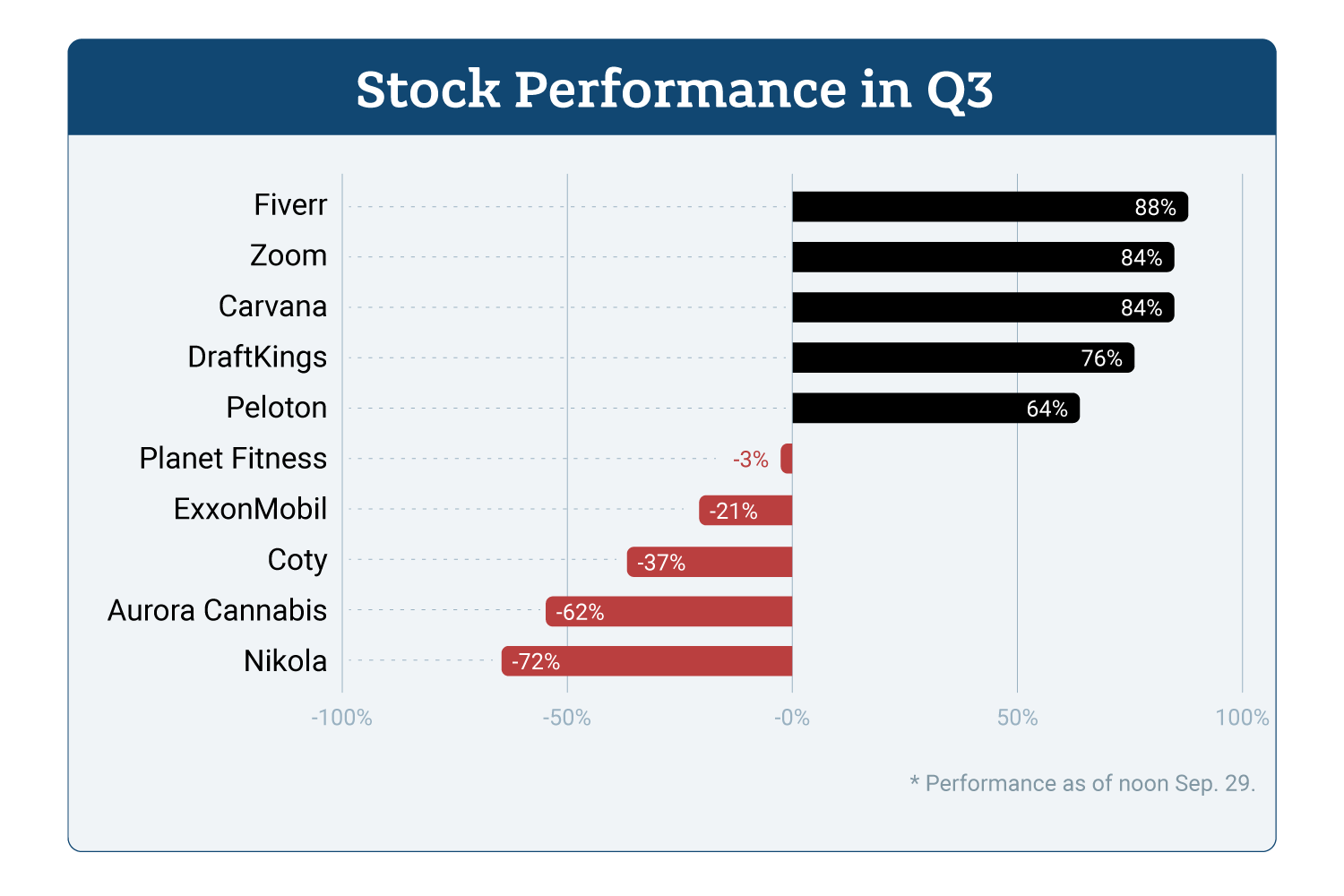 Some of the stock market’s breakout performers of Q2 became full-on all-stars in Q3…but the pandemic and self-inflicted wounds knocked the share price of other public companies. Here’s a quick rundown.

Big picture: The major indexes all posted single-digit gains for the quarter, when a down September cut short a red-hot August rally.

As the ink dries on Q3, nearly 900,000 Americans are filing new jobless claims each week. Over half of the 22 million jobs lost in March/April haven’t returned. And we still can’t keep our glasses from fogging while wearing a mask.

Pulse check on the economic recovery

Silver linings: The housing market’s on fire (the good kind). Consumer spending has continued to rise throughout the summer. And the Fed is hopeful unemployment will dip to 7.6% by year’s end. It was 3.5% before the pandemic in February.

On the monetary side…the Fed provided a big update in September on its plans for steering the economy, including running inflation at a 2% average over time and leaving interest rates near-zero until 2023.

On the fiscal side…Fed Chair Jerome Powell and Treasury Sec. Steve Mnuchin credit the $3.3 trillion in relief spending Congress authorized for driving the recovery and have asked lawmakers for more. But with the election and a Supreme Court fight ahead, don’t hold your breath for more emergency aid until the Christmas lights come out.

Some problems, like our daily caffeine intake, are too big to visualize. Climate change is no longer one of those problems.

Over the last three months, extreme weather events made more intense and frequent by human-induced climate change have ravaged communities across the country. 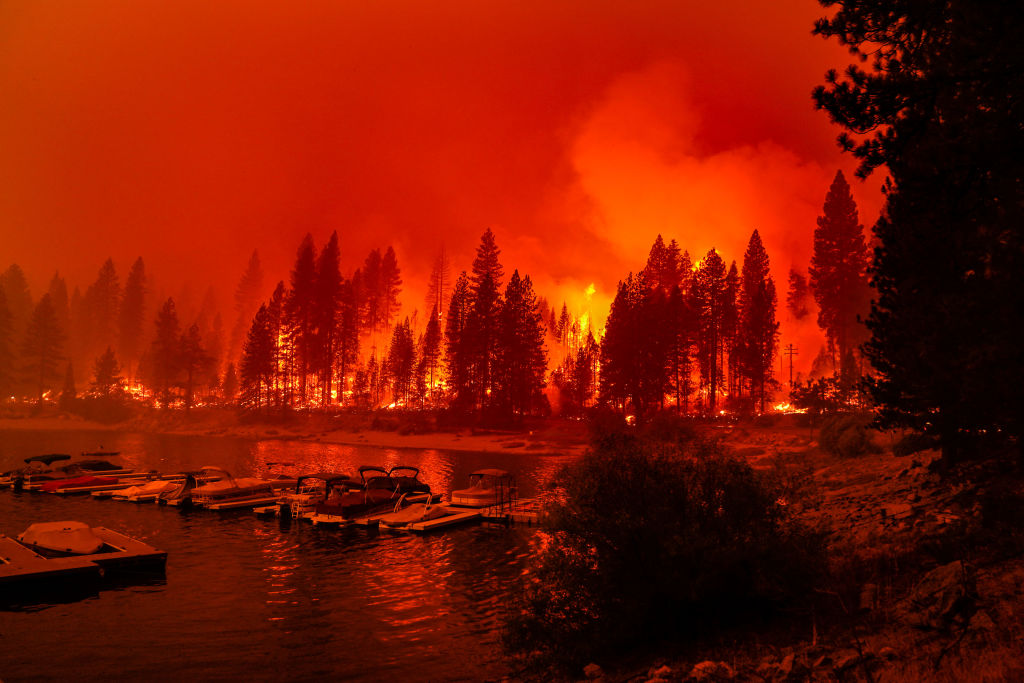 Parts of the West Coast have been ablaze since August, with a record 3.7 million acres burned across California.

The Atlantic Coast produced so many big tropical storms that the World Meteorological Organization depleted its list of 21 names by September and is now using the Greek alphabet. 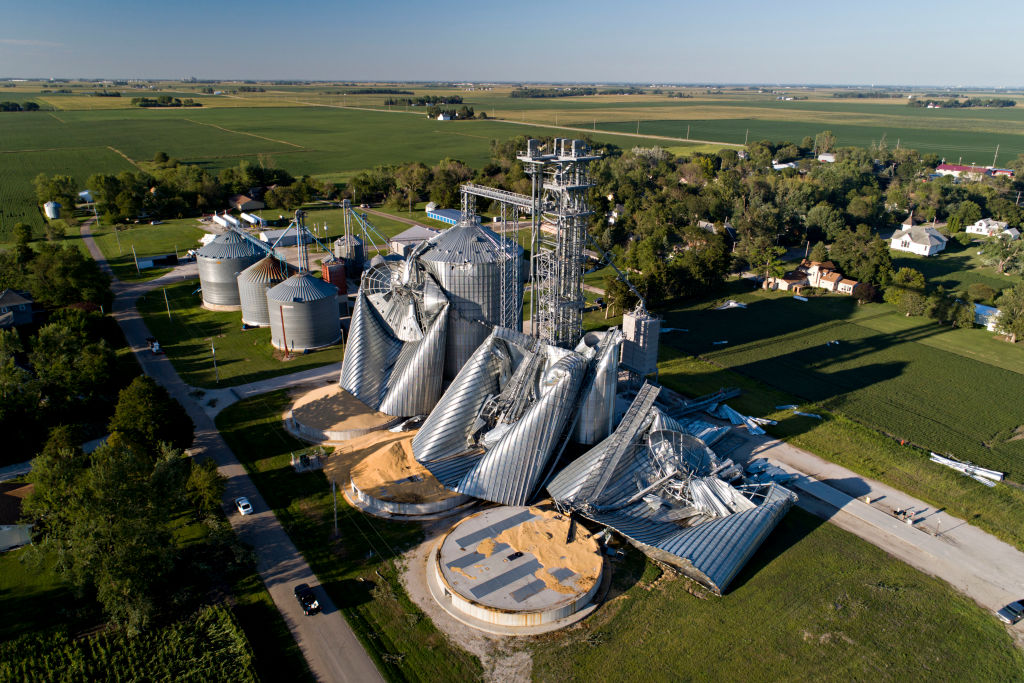 In August, a surprise “derecho” storm swept across the Midwest, causing billions of dollars in damage and flattening Iowa’s corn crops.

On the corporate side…companies including Walmart, Morgan Stanley, and Google made substantial commitments to zero-out emissions over the next few decades. Amazon started to make cleantech investments through its new climate fund. And China pledged to go carbon neutral by 2060. 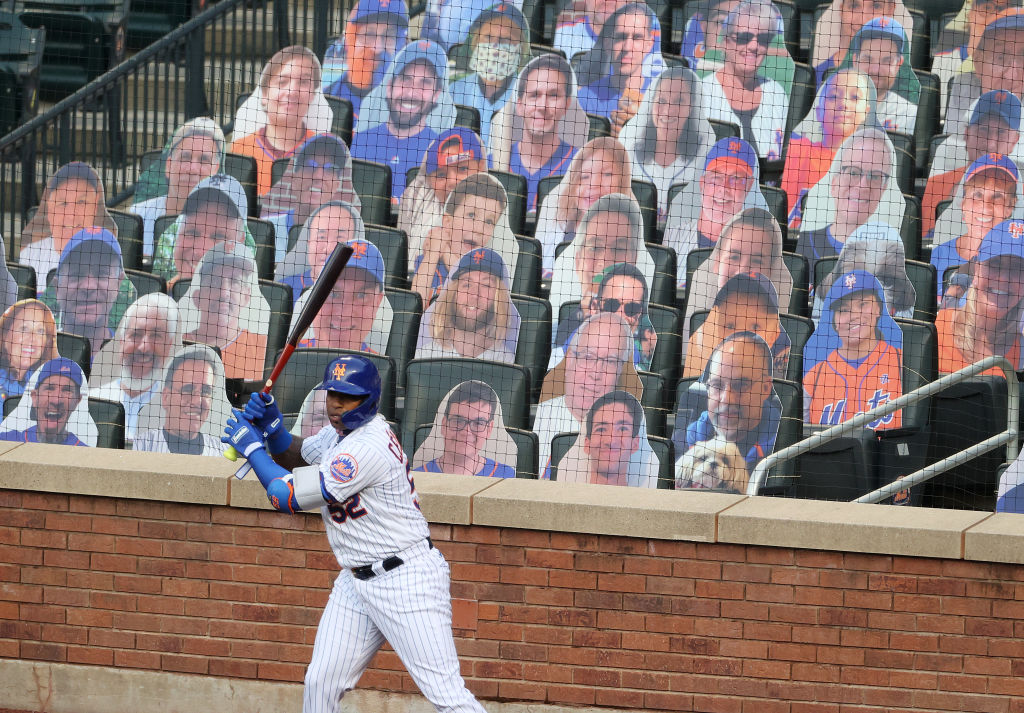 There was a point in early April when the only sports going on were Ukrainian ping-pong and two squirrels running around outside your window. In Q3, every major U.S. sport returned to the field/rink/course/diamond, and we’re grading each one.

Zero NBA players have tested positive for Covid-19 since entering the famous “bubble” in Orlando. Both the NBA and WNBA have made combatting racism a focal point of their return, at one point refusing to play games following the police shooting of a Black man, Jacob Blake, in Kenosha, WI.

This summer, the National Women’s Soccer League became the first major U.S. sports league to return to action from the Covid break, while the MLS has already welcomed fans back in certain states.

The NFL resumed earlier this month with seven teams allowing fans to attend games at limited capacity. Week one ratings dropped 8% over last year, but TV ad spend is still on pace with 2019. Bad news out of Titans camp this week, though. On the college side, the Big Ten and Pac-12 both reversed earlier decisions to postpone the season—they’ll start playing games in October and November, respectively.

After early Covid-19 outbreaks cast doubt on the MLB’s anti-bubble approach, the shortened and fanless season has limped its way to the playoffs. The Tampa Bay Rays, the Brew’s July pick to win it all, entered the postseason as the top team in the American League.

The rest of the sports world also enjoyed relatively successful returns. Professional golf has been underway for months with only minor testing headaches, while the pandemic-era versions of the Tour de France, the U.S. Open in tennis, and the Kentucky Derby went off smoothly. The NHL’s two-city bubble approach worked like a charm—more than 30,000 Covid tests returned zero positive cases.

Publications like Bloomberg and Food52 have good reason to expand into the OTT space, even if they’ll never rival Netflix or Hulu.
byMorning Brew

How Marketers Can Leverage Presidential Debates for Success

Some marketers view the debates as an occasion to ball out almost as much as they would for actual ball-related events 🏈.
byMorning Brew