The Blockbuster That Hollywood Was Afraid to Make 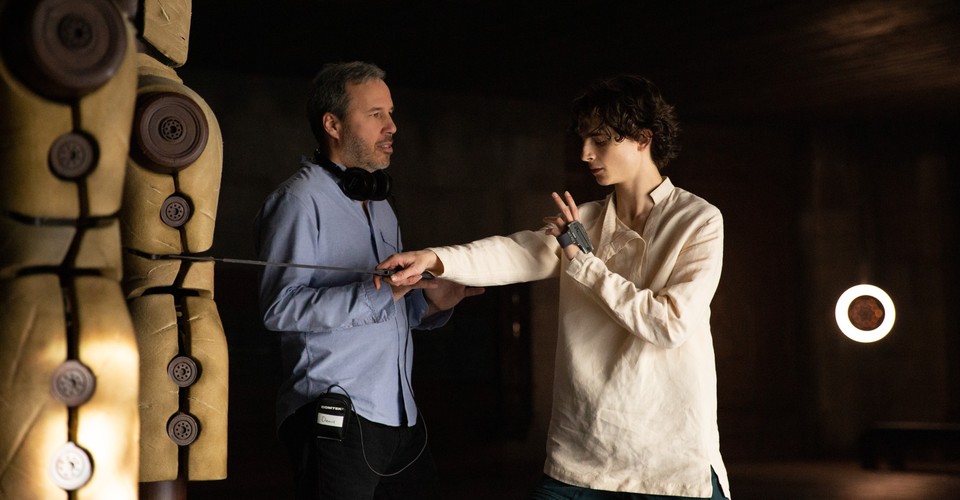 When I asked him about his film adaptation of Dune, the writer-director Denis Villeneuve quickly held up his prized copy of Frank Herbert’s book, a French-translation paperback with a particularly striking cover that he’s owned since he was 13. “I keep the book beside me as I’m working,” Villeneuve told me cheerfully over Zoom. “I made this movie for myself. Being a hard-core Dune fan, the first audience member I wanted to please was myself. Everything you receive is there because I love it.”

His enthusiasm is infectious, but that’s a bold approach to making a movie with a reported $165 million budget, only the second big-screen adaptation of the highest-selling science-fiction novel of all time. The first, David Lynch’s 1984 effort, was such a critical and financial flop that Lynch still hates the mere mention of it. That film’s failure gave the book a reputation for being unadaptable: too long, unwieldy, and dense with lore to work on a blockbuster scale. But to Villeneuve, Dune’s immense depth and breadth are strengths, not challenges—his movie thrives in the little details, rather than trying to rush through them in search of a Hollywood ending.

“The music you hear in your teens, your brain is designed so the information you receive has strong anchors into your personality,” Villeneuve told me earlier this month. “As you grow up, you always go back to those moments, to that nostalgia.” The way he tells it, Dune has been anchored into Villeneuve’s personality since he read the book on a whim as a teenager, and though there were things he admired about Lynch’s version, he knew it would not be the last effort to adapt the story for film. Lynch’s movie “is almost like a comedy—I didn’t feel like Lynch took Dune seriously. That’s the thing. Me, I take sci-fi very seriously,” Villeneuve said with a grin.

His ownership of such a massive project would have seemed a surprise only a few years ago, when Villeneuve was still best known as the director of the breakout Canadian indie Incendies who had moved into Hollywood to make incredibly dark, if handsomely mounted dramas, such as Prisoners and Sicario. Those were both adult crime thrillers—Prisoners about a grieving father looking for his child’s abductor, Sicario a portrayal of the moral gray areas of the drug war—made with major production values and crammed with movie stars, but with more modest budgets, a genre Villeneuve admits is becoming an endangered species.

“When I did Prisoners, in 2012, the people at the time were saying it was the end of $50 million movies, the mid-range,” he said. “It’s true; sometimes it feels easier to do a $200 million movie.” Since then, his cinematic ambitions have grown to include 2016’s alien-encounter film Arrival (a Best Picture nominee) and 2017’s Blade Runner 2049, a divisive but grand attempt to sequelize one of the most respected sci-fi films of all time. While doing press for Arrival, Villeneuve heard that the production company Legendary Pictures had acquired the rights to Herbert’s novel, and he threw his hat into the ring.

“It’s a project I would have never dared to mention 10 years ago. I felt that I was starting to get ready to do it as I was working on Arrival and Blade Runner, having enough technical knowledge to approach it. When people were asking me, ‘What would be your dream project?,’ I kept saying, ‘Dune,’” Villeneuve told me. “It was the fastest meeting of my life. We met, shook hands, me and [the Legendary Pictures executive] Mary Parent. It was a two-minute meeting.”

His vision of the story turns the “chosen one” narrative placed on protagonist Paul Atreides (played by Timothée Chalamet) into a cruel responsibility, lending weight and shading to a story that might otherwise feel simplistic to audiences. “It was important for me … that Paul not be triumphant, that he has the burden of taking someone else’s life. Paul Atreides is a tremendous warrior but doesn’t enjoy a minute of it. He has the skills to be a warrior, but he doesn’t have the soul to be a warrior,” Villeneuve said. But in digging deeper into Herbert’s characterization, and giving ample screen time to the complex dynamic between Paul and his mother, Jessica (Rebecca Ferguson), Villeneuve also cuts the film’s story off halfway into Herbert’s book, a gambit that could alienate audiences on their way out the door.

He recognized the challenge that had dogged Lynch years ago, of how to turn a sprawling epic into something digestible for mainstream theatergoers. Lynch’s attempt sacrificed coherence by cramming the entire book into a single 137-minute movie; Villeneuve’s film is even longer, but tackles far less plot. “The problem isn’t bringing the book to the screen. It’s bringing the book to the screen in a Hollywood context,” Villeneuve said. “I had very few demands, but I said I wanted to shoot in the real desert—I won’t shoot that on a backlot—and we should do two parts. It’s a decision that was spontaneously accepted by the studio. Everybody understood.”

In decades past, spending so much money on a movie that lacks an ending would have been dismissed as ludicrous within the industry, but Villeneuve made his pitch in 2016, when every studio was scrambling to imitate the gargantuan success of the Marvel Cinematic Universe. Now genre storytelling in Hollywood is valued most if it can never end, and an adaptation of Dune seemed ideal for that: Herbert produced six Dune books in total, his son Brian has churned out more in collaboration with Kevin J. Anderson, and HBO Max has already announced a supplementary TV series to further expand the fictional universe. Villeneuve is attached to make Dune: Part Two, which Legendary and Warner Bros. just officially green-lit. “My first idea was to shoot both movies back to back. It was too expensive, and they wanted to test the water, which I understand, it’s fair. It’s part of the game,” he said, underlining the financial risk. “I think that somewhere in everybody’s mind, everyone was afraid.”

Since 2016, Hollywood’s fervor for franchises has shifted slightly—failed efforts such as Universal Pictures’ “Dark Universe” have become somewhat of a cautionary tale, and Marvel’s comic-book rival, DC, has focused more on standalone movies than big, interconnected storytelling. But the greatest danger to a second Dune film revolves around the ongoing health of the big-screen experience, which Villeneuve has said his film is explicitly intended for. The pandemic delayed the release of Dune by almost a year, but it also meant that it was included in the distributor WarnerMedia’s experiment of putting every 2021 release on HBO Max the same day it hit theaters. Villeneuve rebuked the strategy in an open letter when it was announced, calling it “a desperate attempt to grab the audience’s attention.” Later, he said that watching Dune on TV would be like driving “a speedboat in your bathtub.”

Villeneuve sounded a little more equivocal in conversation with me, perhaps because the film had already opened to encouraging grosses in Europe—similarly, it outperformed expectations in America last weekend, opening to $41 million, a record best for WarnerMedia in the HBO Max era. But his disdain was still clear. “I’m not against streaming. I love streaming. But … as a filmmaker, I want to protect the theatrical experience. I feel that, right now, decisions are being made by technocrats and people on Wall Street,” he said. “It’s true that the theatrical experience is up and down; it’s a more erratic business … But we’re talking about a language here. We’re talking about an art form.”

Dune is as stark an advertisement for the theater experience as is imaginable, which makes its HBO debut all the more ironic—it would be best experienced in an IMAX theater on a screen 100 feet high, with a pummeling sound system. But Villeneuve seemed aware that because of the continued prevalence of COVID-19, the debate extended beyond a corporate desire to juice subscription numbers. “Right now, the enemy is the pandemic. So I understand … the movie will be available in areas that are not safe … But when we’re out of the pandemic, it will be necessary to make decisions that protect the theatrical experience,” he said. “People want to go back to the theater. I’m not afraid for the future of the big screen, frankly. I’m afraid for art-house movies that will have less access.”

Villeneuve’s interest has, of late, tended toward large-scale films, and with Dune: Part Two happening, he’ll stay in that world for the next few years. But he’s the rare filmmaker who seems to be able to work at that level without succumbing to unoriginality, delivering genuine event cinema as opposed to many of the more weightless-feeling blockbusters crowding screens today. He seemed aware of that ongoing test. “Cinema is art; art is risk,” he said. “Since the beginning, cinema has been a weird balance between art and commerce … It’s part of the game. If I didn’t want to play that game, I would be doing ice sculpture.”

Listen to David Sims discuss Dune on an episode of The Atlantic’s culture podcast The Review: