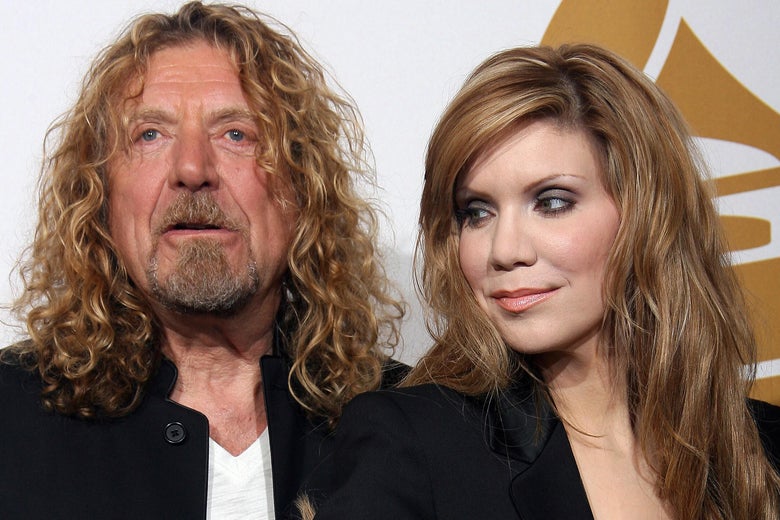 I was fairly dismissive when the classic-rock icon, former Led Zeppelin yowler-in-chief Robert Plant, joined Gen-X bluegrass standard bearer Alison Krauss to release their first, improbable-seeming collaborative album, Raising Sand, in 2007. It seemed too snug a fit into producer T-Bone Burnett’s savvy campaign that decade to bring roots music to the mainstream, with soundtracks to films like O Brother, Where Art Thou? and Cold Mountain—an effort that felt, to me, too close to domesticating the hairy, ornery heritage of blues and country into smoothly tasteful, canonically vouchsafed background ambience. That Raising Sand went on to a Grammy sweep seemed to epitomize the music industry’s determination to find any excuse to drape garlands on boomer dinosaurs. Yes, what Burnett, Plant, and Krauss had made was musically impeccable. But I wanted to feel a sharper peck.

Everything feels different in 2021, as Plant, Krauss, and Burnett reunite to present that record’s sequel, Raise the Roof. I’m no longer nearly so wary of music that is domestic or communally consoling, which has always been an element of roots traditions. And boomer musical hegemony is far from the oppressive force it once was—witness this week’s Grammy nominations, loaded up with artists in their teens and 20s. If anything, the influences of streaming and TikTok might be eroding music-history context and consciousness. Cover-song albums like Plant and Krauss’, drawing repertoire from across many decades and genres, offer listeners a chance to retrace and explore unfamiliar musical regions.

I don’t think I was entirely wrong about Raising Sand; listening back today, it still seems to lean a bit heavily to the pretty and sleepy. But closer listening reveals more worth hearing, and it certainly doesn’t seem so cynical, given that the artists have waited more than a dozen years to follow up on its success. Instead, Krauss carried on with her prestigious path in Americana (among Grammy-winning women, her total is second only to Beyoncé’s). And Plant, now 73, has proven to be one of the broader-minded artists of his vintage, reaching out to collaborators around the globe—a far cry from the reactionary coots like Van Morrison and Eric Clapton among his 1960s peers.

Even as they’ve gone their own ways, Plant and Krauss have apparently kept in touch, sending back and forth ideas for songs they might sing, until they had the makings of a new album. I think you can hear the cumulative effects of that process on Raise the Roof compared to its predecessor, where producer Burnett made all the song choices. There’s more variety in mood and pace here, and the singers sound more firmly in command, showing off all the vocal and emotional colors at their disposal.

Thematically, on the other hand, there’s a more consistent through-line than on Raising Sand: While it’s not obtrusive until you stop to notice it, nearly every song here tells a story about a couple separated by choice or circumstance, expressing their agonies or longings or resignation, and the long odds against their reunion. The 12-track, 53-minute set begins with “Quattro (World Drifts In),” originally by the Arizona indie-twang band Calexico, which alludes vaguely to “a time, occupied and invaded,” and having “no choice but to run to the mountains, where no poppies grow”—a possible geopolitical framework for all these tales of displacement. And though the album was recorded in 2019, its post-pandemic release infuses the songs with echoes of our collective recent experiences of separation and loneliness. Plus, Plant and Krauss were themselves so many years apart as a duo, so the subject matter evokes that long hiatus.

That theme also underlines something about the vibe of Plant and Krauss together. Unlike a sibling group such as the Everly Brothers—whose 1965 rocker “The Price of Love” gets a slow-motion, shiver-inducing treatment here—their voices don’t merge into a symbiotic unit. Instead, with his weathered rock’n’roll pipes and her more controlled, pearlescent timbres, they gain power from the contrast and distance, an energy that seems generated in the space between. They are separated by gender and generation, training and tradition, and the Atlantic tides between their homelands. Plant hails from the Black Country of the British West Midlands, and Krauss from Illinois, where she became a competition-level fiddle prodigy and then a bluegrass star at an early age. No matter how elegantly they harmonize, the ear hears them as two individuals, independent musical minds making choices in reaction to one another.

The fine detail of that call and response, approach and retreat, braided through each song is what makes their collaboration so rewarding on repeated listens. While Raise the Roof serves fine as the dinner-party background many consumers may take it for, to get the maximum impact, you should imbibe it in a dark room, headphones on, leaning back and sinking deep.

Its abundance is due equally to the voices and to the instrumental arrangements. Burnett has reassembled the core of the murderer’s row who played on Raising Sand—guitar genius Marc Ribot, drummer-percussionist Jay Bellerose, and bassist Norman Crouch—and enhanced them with almost ridiculous riches, including among many others the jazz and country guitar virtuosos Bill Frisell and Buddy Miller; David Hidalgo of Los Lobos, playing the regional Mexican guitar variant, the jarana; and Nashville session stalwart Jeff Taylor playing exotic antiques like the dolceola and the Marxophone. The sound is never busy, but it is often thick, one player sketching in foliage while another traces the zigzags of insects and birds between the leaves. As on a great jazz record, it can be intoxicating here to tune out the gestalt of a given track and hone in on a particular micro-component—the evolving path of a mandolin part from Miller, or Ribot playing a Hofner bass in counterpoint to Crouch’s upright while Krauss’s brother Viktor (another bassist here) adds a woozy mellotron grumble.

Still, Krauss and Plant remain the prime attractions, alongside the songs themselves. Given the dualities that define the record, I’m drawn to sorting the tracks into twos. My favorite pairing is the two 1960s British folk-revival songs: “It Don’t Bother Me” by the beloved crooner-guitarist Bert Jansch and “Go Your Way” by the nearly forgotten Anne Briggs, where Plant and Krauss divide leads contrary to gender lines. Plant tenderly caresses the melody of the Briggs tune about an abandoned woman: “I sit mending your clothes/ That you will never ever wear/ Cooking daily for you I do prepare/ But woe-oh-oh is me…” Meanwhile, Krauss commandeers Jansch’s song of masculine defiance (or denial) with firm certitude: “You twist my words/ Like plaited reeds… But it don’t bother me what you say/ No, no, it just don’t bother me.” Perhaps it is the play with assumed identity, or simply the elemental sturdiness of the songs themselves, that draws out each of the singers’ finest performances.

A more upbeat dyad, played straighter in gender terms, derives from two somewhat obscure ’60s Southern soul tracks: “Trouble With My Lover,” a simmering infusion of New Orleans spirit written by the late, great Allan Toussaint and originally sung in a deep-cut recording by Betty Harris; and “Searching for My Love” by Bobby Moore’s Rhythm Aces, which in the version here may recall Plant’s days in the 1980s retro-rock group the Honeydrippers, only better. Another transformative pair offers a stylistic switch instead of a gendered one: Plant sings the classic Appalachian-folk murder (and capital punishment) ballad, Ola Belle Reed’s “You Led Me to the Wrong,” which lies closer to Krauss’s specialties. Meanwhile, she takes lead on the storied “Last Kind Word Blues” from the early 1930s by Geeshie Wiley, a foundational blues singer whose very existence .

The album’s one original song follows, a composition by Plant and Burnett called “High and Lonesome,” itself a throwback of sorts, but now to Plant’s own past. Anybody longing for a Led Zep-style blues pastiche will find it here. The howling high notes of old are absent, but it’s still uncanny how vividly Plant can summon up those youthful tones when he chooses. After that, Krauss restores tranquility with a faithful but ravishing rendition of the 1982 Merle Haggard country hit, “Going Where the Lonely Go.” Given a choice, I might have ended the album with those lullaby-like tones. There’s nothing wrong exactly with the closing gospel-style workout “Somebody Was Watching Over Me” (and it does provide a kind of thematic closure), but it comes across as a touch rote—I’d prefer to hear that one from the late Pops Staples.

Given how much stronger an album it is, it’s too bad that Raise the Roof is unlikely to become the phenomenon Raising Sand was. But one of its pleasures is that, across the decades, Plant and Krauss have made it obvious that, for them, it’s not about those rewards. Neither is it a statement, a pedantic lesson about which music is required for a balanced diet, or, worse, some kind of exquisitely, tastefully carved stick with which to beat younger generations about what “real music” is. It’s simply a congregation of stunningly gifted people getting together, once in a while, to make something beautiful, just because. One could break down its cultural politics further, but it seems so unburdened by agendas now that it feels wiser not to, for once. Instead, simply enjoy it in rare, sweet moderation.