The Most Unintentionally Piercing Moment of 'SNL' 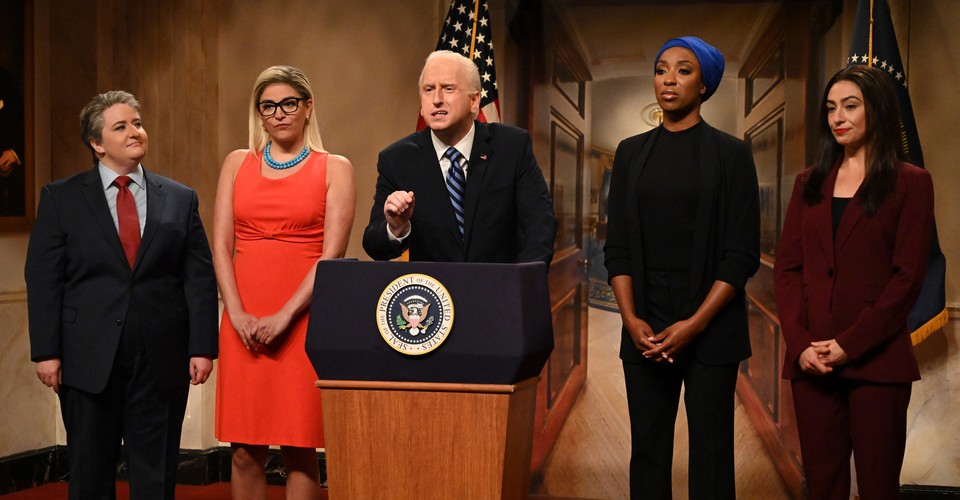 Saturday Night Live began its 47th season with a brand-new cast member staring down the camera lens, a pointed announcement that the show is looking to stay ahead of the curve. That actor was James Austin Johnson, a comedian who gained a Twitter following for his short, surreal impressions, most famously of Donald Trump, during which he rambled through the streets while delivering strange soliloquies in the former president’s voice. But the role he opened SNL playing was President Joe Biden—one he performed with a little less comic dynamism.

Johnson’s appearance speaks to the show’s lack of nimbleness even as it tries to modernize itself near the end of its fifth decade on the air. After years of Alec Baldwin’s tired Trump impression bogging down the show’s political sketches, SNL finally identified a young, talented person online who might do more with the role, and got him on the air … to play Joe Biden. I say all this not to dismiss Johnson’s overall performance. This was his first episode, and the actor did a fine job in each of his sketches. But with its historic 50th season on the horizon, SNL should be feeling pressure to regain its place on the cutting edge of comedy.

Johnson is one of three new cast members hired this year, along with the comedians Aristotle Athari and Sarah Sherman. But the lack of overall cast turnover on the show was low. Only two people departed: Beck Bennett, a veteran presence who left in part because he lives in Los Angeles, and Lauren Holt, who did only one year as a repertory player. That means SNL now has a cast of 21 actors, its largest ever, including longtime stars such as Kate McKinnon, Pete Davidson, and the eternal Kenan Thompson, who is beginning his 19th season on the show. In the past, SNL’s producer, Lorne Michaels, was notorious for his willingness to thin out the ensemble every so often to keep the show fresh; now he seems happy to let everyone stick around as long as they like.

The casting of Johnson as Biden feels like a good step if SNL wants to fight off staleness. The show’s initial approach last year was to feature Jim Carrey in the role, as a glitzy counterpart to Baldwin’s Trump, but the actor’s take was extremely uninspired. After Carrey departed, the reliable SNL impressionist Alex Moffat took the role, but his performance was almost entirely anonymous. Johnson’s Biden was a little more impassioned, a mix of folksiness and desperation, as the show’s opening sketch saw him hoarsely trying to bridge differences among the Democratic moderates Joe Manchin (Aidy Bryant) and Kyrsten Sinema (Cecily Strong) and the progressives Ilhan Omar (Ego Nwodim) and Alexandria Ocasio-Cortez (Melissa Villaseñor).

That grouping of talent is a fine example of just how deep the SNL bench is now, and how depressing it is to see it wasted. Bryant, Strong, Nwodim, and Villaseñor are seasoned actors with years of experience being funny on the show, but they tend to get crammed into stilted sketches like this one, in which each performer tosses off a zingy one-liner about the person they’re portraying but otherwise stands motionless. Johnson’s Biden didn’t leave much of a mark, but that’s in part because of the material he was given, including rote political jabs about Democrats in disarray.

As much as I appreciate the introduction of new talent, most of last night’s show was extremely familiar stuff. The host, Owen Wilson, gamely performed bit parts, did a loose Jeff Bezos impression, and satirized his work on the Pixar movie Cars. Held-over pandemic humor came in the form of a goofy school-board meeting and a talk show plagued with false-positive test results. On “Weekend Update,” Colin Jost and Michael Che—now the longest-tenured pair of hosts in SNL’s history—turned in the same dispirited work they’ve been doing for years. Pete Davidson dropped by for a segment on the Met Gala that seemed to reflect his bafflement that he was somehow still on the show.

Perhaps the most unintentionally piercing moment came as Jost and Che memorialized Norm Macdonald, the former “Weekend Update” anchor and SNL cast member who died last month. As part of the tribute, the show played a few of Macdonald’s best one-liners from behind the “Update” desk, and I was again reminded of what a fearless performer he was, unafraid to tell jokes that might bother his bosses or leave audiences bewildered. That’s a vitality SNL hasn’t had in many years, and unless it actually embraces the punchier online energy it’s clearly trying to emulate, it likely won’t get back there.