The Personality Test in Your Closet 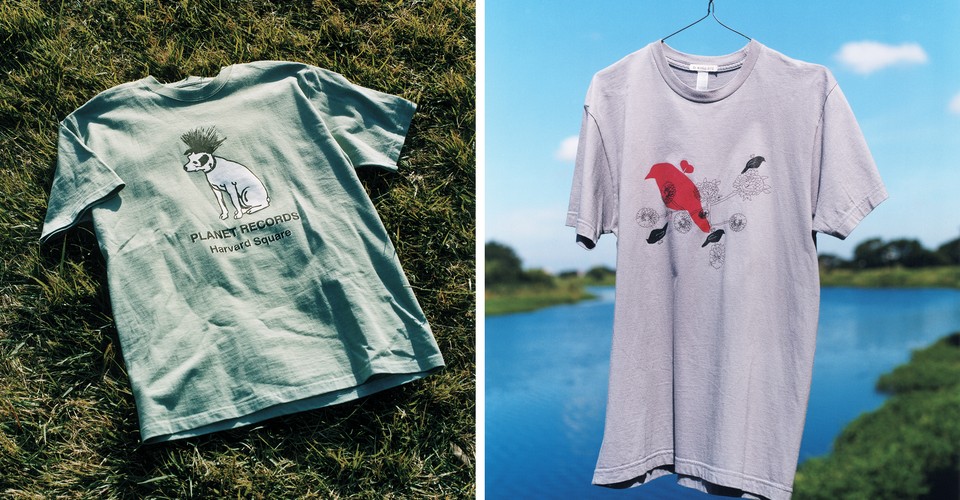 As a wearer of novelty T-shirts and lifelong collector of stuff, I’ve amassed quite a lot of tees over the years. A family road trip to the Ben & Jerry’s factory one summer in the 1990s netted a bright, tie-dyed number, while a recent pandemic acquisition, a forest-green long-sleeved tee, came from Mystic Muffin, a Toronto restaurant famous for its apple cake. I’ve misplaced the former somewhere in storage, but wear the latter all the time in cooler weather.

Novelty tees are consumer items, of course, meant to extend a brand. But they are also embedded with stories; they make our histories physical and known, like wearable pictures that show a specific time, place, and feeling. Their dual roles were evident early on in the coronavirus pandemic, when a groundswell of support for independent businesses led to a proliferation of merch from shops and restaurants forced to suspend in-person operations. The Cut named the trend of sporting such gear “Zizmorcore” (after the dermatologist whose ads were for years ubiquitous on the New York City subway), a paean to authenticity and an unabashed pride for hyper-local brands that is more about feeling a sense of belonging than about any particular transaction. But the tendency didn’t just crest in that difficult moment. Buying, collecting, and wearing merch has long been a way for loyal customers to show their pride and do a little marketing on the way.

My slight obsession for collecting clothing as souvenirs might originate in the idea that I can keep the memories they represent close to me. For that reason, I find the writer Haruki Murakami’s closet of T-shirts fascinating. The best-selling author of such books as Norwegian Wood and Kafka on the Shore has of late been delving into the psychology behind his swag. The result, a lightweight book titled Murakami T: The T-shirts I Love, is part ode, part exhibit that reads with restrained affection for his accidental accumulations. For Murakami, piles of stuff—records, spent pencils, magazine clippings—inadvertently accrue on their own through what he calls his “basic indifference” to conscious collecting.

In deadpan essays originally published in the Japanese men’s fashion magazine Popeye, the author carefully recounts the stories behind each tee. A souvenir from running the 1998 New York City Marathon features a group of dynamic, angular bodies in motion; the race took him memorably across the city’s boroughs and into neighborhoods previously unknown to him. Promotional shirts from various countries for his books (a Keep Calm and Read Murakami tee by a Spanish publisher and another featuring Maki Sasaki’s illustrated cover for the U.S. release of Dance Dance Dance) strike him as particularly odd given that he “isn’t about to stride down one of the main streets in Tokyo” wearing them. Rather, they live as a secret shame in a cardboard box, as what he calls “unusual data from the past.” The diaristic entries have the simplicity of a show-and-tell, with Murakami’s spare prose offering a material history of his closet. The writer turns into a taxonomist, categorizing his wardrobe by theme: whiskey, record stores, lizards and turtles, literature. Through his eyes, we see his appreciation for Americana; his collection is filled with designs that feature beer, Coca-Cola, or ketchup.

Looking at the selections in the book—a shirt from a deli in Syracuse, New York, called Brooklyn Pickle; a tee from the Yale 2016 commencement during which Murakami received an honorary doctorate—I can’t describe his T-shirts as unique. He says as much himself (“It isn’t like these are valuable T-shirts or anything, and I’m not claiming they have any particular artistic value”). His favorite tee is one he thrifted in Hawaii, purchasing it for $1, which eventually served as material for a short story later adapted for film. Here, we have our “Murakami is just like us” moment. Yes, he also likes rooting around the bins at Goodwill! More important, though, these tees excavate an intimate history. The choices we make about what we find and keep point to our interior worlds. Whether impulsively or concertedly, we might choose items because they align with our values, or because we desire to see a facet of our character reflected back at us. Perhaps our personal collections actually say more about our identities than what might be revealed in overtly private details.

Murakami’s understated love letters to his tees also convey how we give life to our things and vice versa. The relationships we have with our stuff can elicit visceral responses; we can be as loving to a ratty old sweater as to a pet. And at times, the feelings of comfort and security almost suggest that our stuff can love us back. Take the modest New York art collectors Dorothy and Herbert Vogel, a librarian and postal clerk respectively, who gathered some 4,000 works over 50 years. Dorothy mentioned once that they loved their works of art “as if they were children.” They cared for their artwork in their own home, storing all of it in their one-bedroom Manhattan apartment for decades. In a 60 Minutes episode from 1995 about the Vogels, Jeanne-Claude, of the late art duo Christo and Jeanne-Claude, discusses the Vogels’ impulse to collect as an obsession, a “virus.” Later, Dorothy remarks, “We didn’t do it to make money,” a line that hints at a driving force as inexplicable as our natural pull to certain objects.

The T-shirt, whatever its form (uniform, sportswear, memento), has a similarly intangible quality. A white Hanes version featured in a 2017 fashion exhibit at the Museum of Modern Art—a tour of influential garments from around the world—exemplifies an item whose minimalist functionality has made it venerated. The souvenir tee, meanwhile, can be simultaneously banal and rare; it may be available in large quantities, but is location-specific. Either is a peek into a daily life.

Do we buy and collect stuff because of our insatiable need to consume, or because we see ourselves in the things we buy? Looking back on my various collections, I don’t see a pattern as of yet, but I suspect it’s a strange mix of both. Since childhood, one of my favorite parts of a museum has been the gift shop; I rarely leave without a memento. Earlier in my life, I stockpiled stickers, erasers, pencils, shells, rocks, and coins. Now I’ve progressed to slightly bigger things: junk left on the side of the road, clothing, tin food containers, art. Like Murakami, when I collect, I don’t really mean to do so—it just happens. “​​T-shirts are one of those objects that just naturally pile up,” he writes drolly, and I tend to agree. But if collecting is, at heart, an extremely ordinary practice, its very mundanity gives us its meaning.