The Philosopher Who Took Happiness Seriously 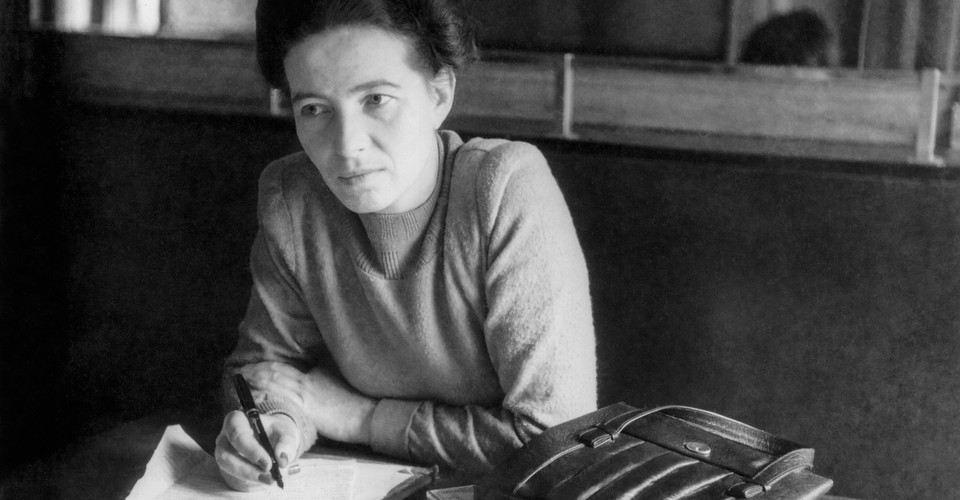 In Memoirs of a Dutiful Daughter, Simone de Beauvoir remembers that as a child, she imagined her best friend, Élisabeth “Zaza” Lacoin, dying, and her schoolteacher announcing that Zaza had been called away to God. In that case, de Beauvoir thought, “Well … I should die on the spot. I would slide off my seat and fall lifeless to the ground.” In her novel Inseparable, based on her relationship with Zaza, she describes an identical feeling. Sylvie Lepage (de Beauvoir’s stand-in for herself) is captivated by the tiny figure of Andrée Gallard (her stand-in for Zaza) confidently crossing a wide boulevard after school; soon after, she declares to herself that if the vivacious Andrée died, she would “slip under my chair and fall down dead as well.”

De Beauvoir tried to tell the story of Zaza—whose rebellious love and tragic suppression by her family deeply affected her—in various memoirs and short-story collections. She deemed Inseparable, written in 1954 and recently published for the first time, too intimate to publish in her lifetime. Zaza’s story was, for de Beauvoir, about human struggle against strict social and moral codes, and Inseparable foreshadows a core idea in de Beauvoir’s fiction, as well as her philosophical writing to come: an ongoing, conscious practice of—or negotiation for—freedom by every individual.

From the moment the studious Sylvie meets Andrée, she is besotted by the girl’s zest for life: Andrée swims in rivers and gallops on horseback; she is moved every time she looks at a peach. “The heavenly gift she’d received—and which I marveled at so much—would manifest itself in the most disconcerting way: it was character,” Sylvie says. Just as Zaza taught young Simone the “delight of intellectual exchange,” as de Beauvoir recalls in All Said and Done, the final volume of her autobiography, Andrée teaches Sylvie the pleasure of discussing books and ideas. Sylvie’s all-consuming love for her friend transforms her, pulling her away from her strict Catholic upbringing and her habit of confession. She becomes determined to “eat, read, speak, and dream in whatever way I pleased,” even if the worldly life she wants is seen as sinful.

But while Sylvie grows more independent, Andrée becomes trapped by familial and faith-based obligations, desperate to deserve her mother’s and God’s love. She is roped into tedious balls, expected to stop her studies and her music, and forbidden from seeing Bernard, the boy she wants to marry, whose family isn’t part of her social circle. In Andrée’s world, piety and love, being a good daughter and being a good person, are indistinguishable; the threat of punishment for not being either tears her apart. Sylvie tries, and fails, to convince Andrée that following her heart is not a sin, that being pure is not a prerequisite for a joyful life, raging, “Everyone wants to save her. And she wants so much to have a bit of happiness on this earth!” Eventually, Andrée, miserable and wasting away, comes down with a fever and, like Zaza, dies young.

That Zaza was unable to be true to herself in the one life she had made de Beauvoir furious. “It was through Zaza that I discovered how odious the bourgeoisie really was,” de Beauvoir recalled in All Said and Done. “For me Zaza’s murder by her environment, her milieu, was an overwhelming, unforgettable experience.” She never got over Zaza’s death; she later wrote that she had bought her own freedom with it. In her memoirs, she recounts her discovery of strange delights: “I listened to the gurgling of the water, and I knew then that nothing would make me give up earthly joys.” De Beauvoir remained devoted to the importance of these earthly pleasures, and the effect of losing Zaza echoes in the philosophy she developed 18 years later in The Ethics of Ambiguity, her treatise on freedom.

In Ethics, de Beauvoir describes a type of man (of which Catholics are one example) who is doomed to unhappiness because he is “not capable of existing without a guarantee”—the promise of paradise. True freedom involves taking this leap of faith, and believing in humanity’s ability to delight. Without putting in the work of trying to be happy, we remain trapped. “In order for the idea of liberation to have a concrete meaning,” she writes, “the joy of existence must be asserted in each one, at every instant; the movement toward freedom assumes its real, flesh and blood figure in the world by thickening into pleasure, into happiness.” For de Beauvoir, the danger of religious faith lay in a tendency to “thrust aside” all doubt or critical thought. Ethics insists that man is responsible for creating a meaningful existence for himself. “If we do not love life on our own account and through others,” she writes, “it is futile to seek to justify it in any way.”

This eternal negotiation can be seen in Inseparable, as well as de Beauvoir’s other fiction—particularly in her female protagonists, who accept the impurity of human life in their quest for a desire always just out of reach. Françoise in She Came to Stay, Anne in The Mandarins, and Monique in The Woman Destroyed are all forced to accept this life without a guarantee, to negotiate a love that falls somewhere between subjugation and fulfillment.

De Beauvoir wrote that Zaza had taught her “the joy of loving,” even though this love was somewhat unrequited. She later referred to her feelings for Zaza as a precursor to her relationship with the philosopher Jean-Paul Sartre, declaring that with Zaza, she “had plumbed the depths of humility; now the same story was repeating itself.” Sylvie, in Inseparable, is of a piece with these female protagonists who find love in the fact of being unloved—she is devastated when Andrée insists that no one has ever loved her the way Bernard did: “What about me?” Sylvie cries to a bewildered Andrée. “From the day I met you … I would have given up everything not to lose you.”

Unrequited love, embarrassing as it can be, is, in de Beauvoir’s thinking, a way of being unconstrained, because loving the other “genuinely” is to love him “in that freedom by which he escapes. Love is then renunciation of all possession.” Liberation exists in this commitment to passion regardless of pride, in this middle space that she carves out between humiliation and ecstasy, between damnation and joy. Real love, she seems to say, can be found in our willingness to bargain regardless of the outcome; and only when we know and accept its pleasures, with or without its guarantee of paradise, can we be truly free.