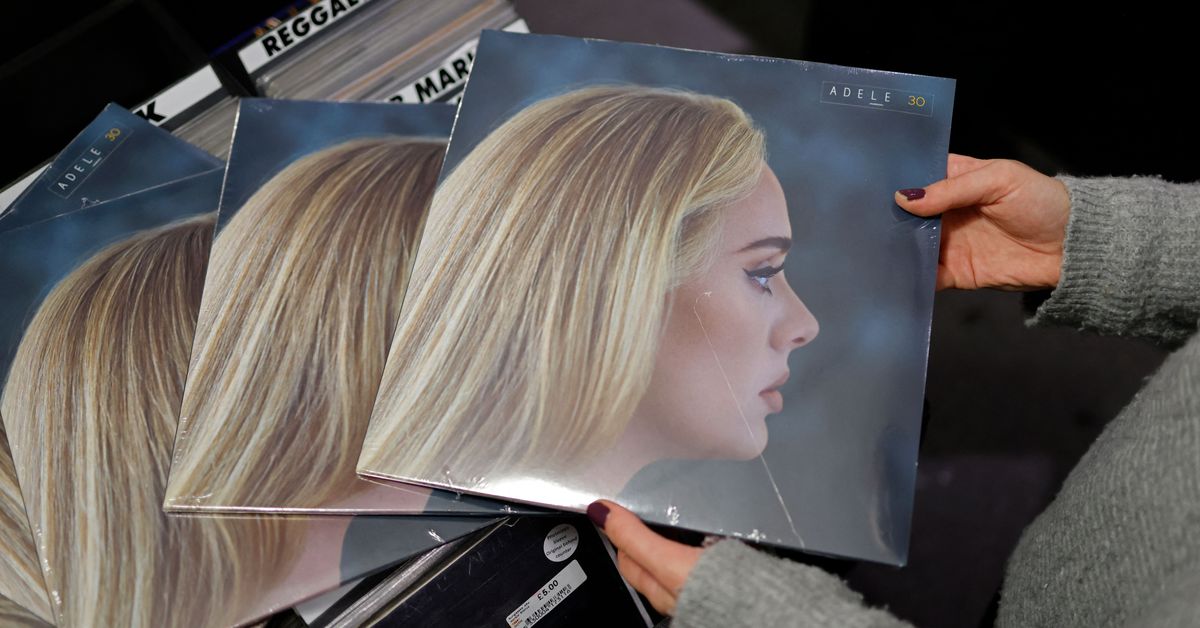 The British songstress released her latest album, 30, on Friday to much global fanfare, and she’s expected to do major worldwide sales (at a moment when physical music sales are rare). There’s been speculation that Adele’s big splash may also have implications for the music business, and not necessarily all good ones. Sony Music reportedly ordered some 500,000 copies of vinyl records for the album’s release, potentially putting a squeeze on an already tight supply chain. With Adele pressing all those records, there has been speculation that she’s crowding out some space for others. At the very least, the issue is drawing some attention to a real crunch in the music industry.

“All of these bigger artists are selling more records on vinyl, and all of them together are clogging up the plants, whereas a few years ago, vinyl was probably second-tier for these artists or even third-tier,” said Mike Quinn, head of sales at ATO Records, an independent record label based in New York City. But he’s not worried too much. “We’ve not had any plant turn us down saying, ‘Oh, we have too many Adele records.’”

Vinyl has seen a renaissance over the past decade or so, with demand surging even more during the pandemic. According to the Recording Industry Association of America (RIAA), vinyl sales grew by 28.7 percent in value from 2019 to 2020 to $626 million. Last year also marked the first year vinyl exceeded CDs in total revenue since the 1980s. Manufacturers have struggled to keep up.

“Vinyl’s been surging, or resurging, from the dark ages since probably 2007, 2008. It just did so under the radar,” said Brandon Seavers, co-founder and CEO of Memphis Records, a vinyl manufacturer. “The pandemic hit, and everything exploded.”

Adele isn’t at fault for the vinyl supply chain’s problems. She, like all artists, wants to sell a lot of records, and even without her, the industry has been facing delays and setbacks and struggling to keep up with skyrocketing demand for quite some time. As Shamir, one Philadelphia musician, put it in an interview with NPR, “Adele is not the culprit” but also “is not helping.”

Adele has expressed annoyance at the lead time for the album, in an interview with BBC Radio noting that 30’s release date had to be set six months in advance to get CDs and vinyl made. “So many CD factories and vinyl factories, they bloody closed down even before Covid because no one bloody prints them anymore,” she said. And those that are printing them are having a hard time keeping up.

Vinyl was supposed to be killed off for good by CDs after the 1970s and ’80s. It turns out the format had some staying power, or rather, some resurgence power that emerged in the 21st century.

Vinyl sales started to pick up in the mid-aughts, and they got a significant boost when big-box stores, such as Walmart and Target, jumped on board and started ordering records. According to Billboard, the mass merchant sector now accounts for about 13 percent of vinyl sales, up from 4 percent in 2018. The pandemic pushed the vinyl revival into high gear.

“People were stuck in their homes, and so they looked for things to do. And they cooked and they baked sourdough and they planted gardens and they bought a Peloton. And apparently they also listened to vinyl records,” Seavers said. “The other factual thing that happened is that vinyl really caught the eye of big-box retail. Amazon was already a really strong supporter of the format, and Walmart and Target had been kind of dipping their toes into the water. In 2020, they dove in head-first.”

Like with lumber or computer chips, supply just hasn’t been able to keep up with demand. Earlier this year, one unnamed executive told Billboard that vinyl pressing plants globally have the capacity to make about 160 million albums this year. He estimated the demand for vinyl was somewhere around 320 million to 400 million units.

Vinyl pressing machines are old and clunky, and they’re hard to fix in normal times, let alone with the current delays that are affecting so many industries. Quinn said one plant he deals with had two of its six machines break recently. Parts that would normally take five to six days to replace took two months. The industry has faced labor shortages, too.

Getting raw materials is taking manufacturers much longer than normal, including the vinyl pellets that are melted down to be pressed into records. Most are produced overseas and shipped over, and therefore face steep delays. Color pellets, which artists and retailers often go for to produce limited-edition or exclusive versions, are proving specifically challenging.

“With the amount of exclusive variants we press on one record, I wonder if I’m making Beanie Babies sometimes,” Sean Rutkowski, vice president at Independent Record Pressing, told Variety.

Adele’s 30 has generated some headlines and speculation about whether she’s making vinyl delays worse. Five hundred thousand records is a lot of records, but in the grand scheme of things when 160 million records are being made, it’s not really the end-all, be-all. None of this is to say Adele isn’t a huge deal. Her 25 in 2015 sold more than 3 million copies in the US in a week; her recent Oprah special averaged 9.92 million viewers, beating all programming except the NFL in primetime. Her 30 is something people want to hear, including on vinyl.

But again, the vinyl delays aren’t really her fault. The problem is more that production is at capacity already, and artists new and old, big and small, are all in line.

The vinyl industry has for a long time been driven by the classics — the Beatles and Eagles and Fleetwood Macs of the world. Now, newer artists are getting in on the vinyl game, too, such as Taylor Swift, Ed Sheeran, Billie Eilish, and, yes, Adele.

“You have to do it like really upfront — and Adele had basically booked out all the vinyl factories, so we had to get a slot and get our album in there. It was like me, Coldplay, Adele, Taylor, Abba, Elton (John), all of us were trying to get our vinyls printed at the same time,” Sheeran, who put out a new album in October, told an Australian radio show, according to Variety.

There are rumors that some of the bigger names may be able to cut in line or make attractive offers to vinyl pressers to secure space for themselves, potentially crowding out smaller names. Still, a lot of the issue really just seems to be that of capacity. Independent artists are trying to compete for the same machines as the big guys, and everybody’s just waiting around. Presumably, Adele had to wait to get her records pressed, too.

“In the industry, we’ve all been making these classics in higher and higher and higher numbers over the years, so those numbers were already in the system,” Seavers said. “You have new artists come along, and they want an incredible amount of new vinyl to meet the demand for their release date.”

The situation is bad for everyone, though for independent artists who are already at a disadvantage in so many ways across the music industry, it hurts more. “It’s a little more insult to injury for these indies because it’s the hard-earned money in their pockets, and it’s their tours that are suffering,” Seavers said.

Quinn said that ATO, as a midsize label, is better positioned than some smaller labels because they have longstanding relationships with pressing plants and agreements for a certain number of records a month. It’s still not as much as they need.

What no one wants is for an artist to have to go out on tour before their records can go out. Sometimes it happens, especially in the current climate, and when it does, it’s not great. Overall for the industry, though, the surge in demand for vinyl records isn’t a terrible problem to have.

“It sucks if you don’t have LPs to sell on tour or you sell out of your first pressing and you can’t get it made for another six, seven, eight months,” Quinn said. But ultimately, he said, this is a “very good problem.”

The internet and streaming have put a squeeze on music artists and made it harder to make money. They’ve changed a lot about what an artist has to do to actually survive, meaning they have to tour heavier and harder, produce more merchandise, and look for things they can have physical control of. Streaming revenue grew by 13.4 percent to $10.1 billion in 2022, according to RIAA, but it takes a lot of streams to make what you would off of the sale of a single LP. For artists big and small, a vinyl record, if you can sell it, is real money. And if Adele gets someone to buy their first vinyl record and they start buying others, that’s good.

The thing is, it takes time for supply chain issues to work themselves out. The vinyl industry is working to up capacity to the extent that it can. Seavers’s Memphis Records will press about 7 million records this year and is aiming to quadruple its output by 2023; it’s a change that won’t happen overnight.

Across the industry, it’s not clear how long the vinyl boom will last. Manufacturers and retailers and labels don’t want warehouses of LPs sitting around if the market cools off. It’s a tough balancing act to figure out whether the current demand surge will stick, or if it will surge even more. When My Morning Jacket, a band under ATO, was set to go with a new album this spring, Walmart and Target came in with buys doubling the number of vinyl records that they had initially planned to make, Quinn said. Still, he’s not sure how long this will go on. “That wasn’t there a year ago,” he said. “I don’t know how long Walmart and Target will be in the vinyl game for.”

In the meantime, everyone is sort of along for the ride — including Adele and her reported 500,000 LPs, (maybe) on shelves now.