We Interviewed the Pug With No Bones 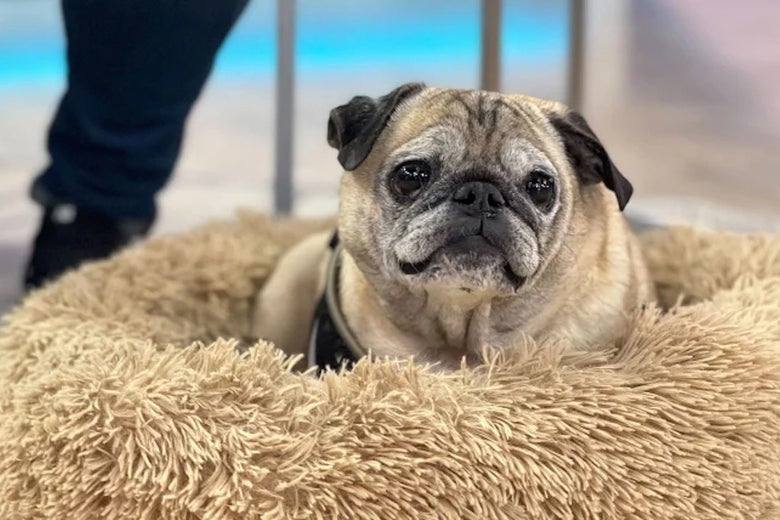 There’s no bones about TikTok’s latest viral phenomenon—literally. Every day, millions of users are checking in to see if a floppy little pug named Noodle has woken up with or without bones. The basic premise of each video is as follows: Jonathan Graziano, Noodle’s owner, opens with a greeting and an explanation. “Good morning everyone, and welcome back to yet another round of ‘no bones,’” Graziano says, “the game where we find out if my 13-year-old pug woke up with bones and, as a result, we find out what kind of day we’re going to have.”

Graziano then gently stands a sleepy Noodle on his feet. If the pug flops back down, that means it’s a “no bones” day. If he remains standing, it’s “bones” day.

This content requires consent that you have not granted on Slate. To view this content please visit www.tiktok.com or .

The deceptively and adorably simple forecast has emerged as the internet’s collective daily horoscope, launching Graziano and his boneless pug into viral stardom. On Wednesday’s episode of Slate’s internet culture podcast ICYMI, Madison Malone Kircher and Rachelle Hampton spoke with Graziano and Noodle about their newfound fame and the philosophical differences between a “bones” and “no-bones” day.

This interview has been condensed and edited for clarity.

Madison Malone Kircher: Is it a bones day? Is it a no bones day? We’ll find out. We’re here with Noodle the pug and also with Noodle’s owner and content manager, Jonathan Graziano, since Noodle sadly cannot converse with us on his own.

Rachelle Hampton: Jon, we’re so excited to have you and Noodle here. Y’all have taken over the internet—y’all might have broken the internet more than Kim Kardashian did back in the day.

Jonathan Graziano: Holy moly. This just keeps snowballing. I’m having this weird out-of-body experience, where I know what’s happening and I can rationalize it, but it’s also … this is way beyond me.

Rachelle: Let’s get to know Noodle a little bit. So, Noodle is 13. How did Noodle come to you?

Jonathan: I adopted Noodle when he was seven-and-a-half years old. I used to work at a company called BarkBox. BarkBox did a comedy night once a month. It was called Open Bark Night, and people could bring their dog. Oh my God, it was a fever dream, it was so much fun. I went up and I took a turn, and I did a bit about how I had just gotten this job and how I loved dogs, but I had met Doug the pug and I wasn’t necessarily a hardcore pug person. I just knew I wanted to get a dog that I would connect with.

And this woman who was at the show, she was there to pitch products for the box. She came up to me afterwards and was like, “You know, I’ve been fostering this dog for a little while, who was an owner surrender. I’m being pretty picky with the people who want to take him, and then some of the people who I thought would want to take him ended up falling through, or they didn’t want to take him. So I’m wondering, would you have any interest? You look like you would be a right fit.”

I saw his photo. He was sitting on an Ikea bag in the front seat of a car. He was five pounds heavier than he is right now. For a little dog, Noodle’s still pretty dense at a solid 23 [pounds], but that was really big for him. I was just like, “Oh my gosh.” I looked at my roommate, and I just went, “I’ll pay, what do you think?” Two weeks later, I adopted him, and he truly crash landed into my life. It was the best. He’s the sweetest little dog.

Madison: So, you adopted Noodle at seven and a half. Noodle is now 13.

Jonathan: Yeah, almost 13 and a half.

Madison: So, it’s been some time, but recently Noodle has become a viral sensation because of these videos you make with him—where you start off the day, Noodle wakes up, you hold Noodle up, and then Noodle can either stand or collapse to the ground like his body is gelatin, and that will determine whether it is a bones day or a no bones day. What I want to know is where this game came from.

Jonathan: No bones originated with one of my dearest, dearest friends, my best friend and roommate in college, Nikki. When she didn’t want to do something, she would go boneless, and her friend would be like, “Okay, we got to go.” And she’d just be like, “Oh my God, my lower body can’t work. We can’t go.” He would be this fun, little thing that they would do where he would move her, or pick her up, or whatever it was. It was just this thing where we realized, if you don’t want to do something, you would just go dead weight.

I adopted Noodle and we learned within the first week of adopting him that this dog can sleep in. I would walk him at like eight o’clock, nine o’clock at night, and I’d try and get three or four walks in a day, just in case he’s got to go potty or whatever it is. And then 11AM the next morning, I’d go look in my room, and I’d be like, “Dude, you got to go out. The tank is full, you got to go out.” So, it wasn’t a bit or anything at that point, but I would lift him up in my bed and he would give me nothing, and I’d prop him up, and he would just collapse back into his sleeping position. That’s when we learned two things: We learned not only that he was a full, natural-born practitioner of no bones, but that if Noodle didn’t want to do something, Noodle’s sure as hell not going to do it.

Madison: Have you asked your vet about Noodle’s Jello-like quality?

Jonathan: Noodle, he’s an older dog, and we’ve had plenty of histories of vet visits and, oh my God … I think they know me as the hysterical one, not in like, “ha ha funny,” but in like, I’m the one to call them right before closing and be like, “Are you available? I need you right now, full emergency.” They’re like, “Jonathan, don’t. Really, you’re fine. You’re fine.” So, obviously as he’s gotten older, he’s got all of his joint supplements and all of his little things, but for the most part, from what I can tell, in all of my time caring from him, he’s just always done.

I always say, whenever I post these videos, I try and make sure that people know, I get a lot of asks for people for me to do this every day and every morning. My big thing is, if he’s sound asleep, or if he’s already up and with it, we’re not just going to do this for a video. It really is just like a litmus test that we do to see in the mornings. He’s got his nice big, soft bed, so I know that he’s, comfy man, but as he’s gotten older, obviously he does have some … he’s got some health issues, but all intents and purposes, he’s a super happy, still with it, still wants to go on walks, still wants to do his whole thing. I do the best I can with him, but he’s a stubborn, stubborn old man.

Rachelle: What is the most inopportune time that Noodle has gone boneless that you can remember?

Jonathan: I live on the fifth floor of my apartment building, and Noodle does not do stairs. I will shepherd him up and down the stairs.

Jonathan: He’s got a little bag … I sit here and I’m just like, “Okay, dude, you’re fine.” And every now and then, he’ll take the initiative and do one stair, and it’s like, “Oh my God, oh you’re so brave, look at you go.” So, the most inopportune time I’ve seen it—there were two instances, there was one time where I was at BarkBox, and there were a lot of people, like investors had come by and they were excited to meet Noodle, because we featured him in content and stuff before.

I picked him out of his bag … and he was just asleep. He fell asleep on the train and sometimes you just got to warm up in the morning, you got to heat up the engine before the car’s ready to go. And I had scooped him up, I plopped him on his bag, and he just flopped down again and went sound asleep, and they were all like, “Well, I guess that’s it.”

Madison: Noodle has sparked somewhat of a TikTok movement. What, in your mind, is the difference between a bones and a no bones day?

Jonathan: I am invested in changing the narrative around a no bones day. When I started filming these videos, it was literally just, here is my old dog who is my joy. I’ve been cooped up with him for 18 months, and he was this silly old dog who just did this very silly thing in the mornings. My interpretation of a bones day is when … you can get your bread.

Madison: I did invest in the stock market, because Noodle has bones today.

Jonathan: Yes, invest in the stock market. But a bones day is where you take the thing that I think you were putting off doing, or the thing you were scared to do, or you weren’t super motivated, and the bones day is the day you do it.

The idea that there’s this little pug out there that can help give you either motivation to get out of bed in the morning or a justification to be kind to yourself that day is miraculous. It’s miraculous that it’s turned into that. I’m so grateful that people have been so kind and so accepting of me and my humor and the way that I am with Noodle and the things that we do together. It’s always been such a joy to share him with people, but … this was not on that bingo card [for 2021].

#duet with @notthemaincharacters can’t put into words how incredible it’s been to watch this whole thing turn into what it has. we’re blown away. ❤️

This content requires consent that you have not granted on Slate. To view this content please visit www.tiktok.com or .

I swear to God, he will sit at this bar. He haunts the front door, and thankfully all the people there, they know him, and I’ve been going there for years and they love him, but they’ll look over and they’ll go, “What the hell was that?” And then they’ll look down at this little pug who has not gotten up. He has not gotten up. He’s lying there yelling at them and they’re like, “Oh wow.” He has gotten stopped on the street. Me, not so much, but Noodle very much has gotten stopped. One day it’ll be, “Oh my God, are you Jonathan?” But for now, it’s been very much like, “Is that Noodle?” I love sharing this dog with people and he is such a special little man … All of this has surprised me and absolutely none of this has surprised me.

To hear the rest of the episode—and make sure you never miss another—subscribe to ICYMI.