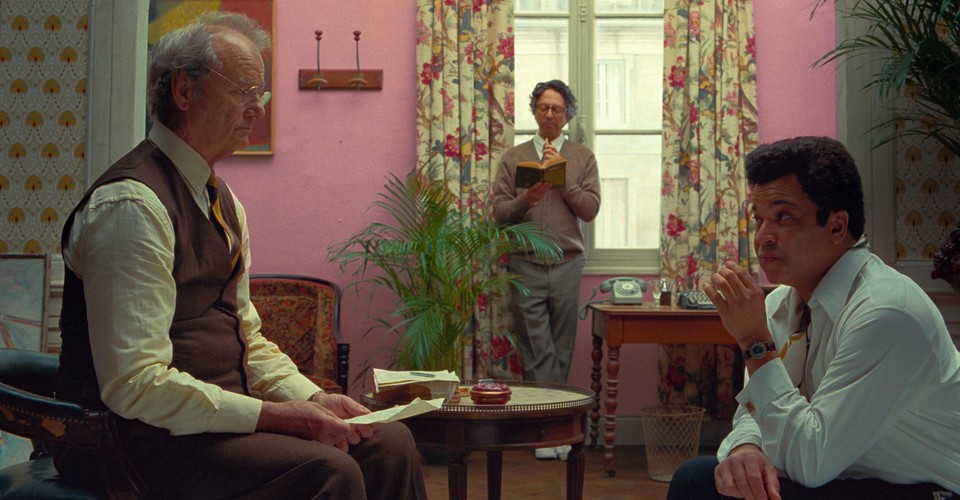 Wes Anderson has always had a penchant for dysfunctional underdogs—the eccentric high schooler Max Fischer of Rushmore, the failed family of geniuses in The Royal Tenenbaums, the herd of garbage-dwelling canines in Isle of Dogs. It’s no surprise that the filmmaker’s newest feature focuses on another lovable long shot: print media. The film is an homage to the mid-century heyday of The New Yorker and its ilk—a time when writers seemingly had no spending restrictions, deadlines, or word limits.

Anderson has always been a nostalgic storyteller. Many of his films filter cinematic movements through his idiosyncratic style; The French Dispatch takes a different approach, attempting to sift that aesthetic onto an entire print magazine. His signatures are all there: beautifully built sets that resemble elaborate cutouts, droll line readings that prompt frequent chuckles but few belly laughs, and a deeply controlling directorial approach. But while The Life Aquatic With Steve Zissou paid specific tribute to Jacques Cousteau, or The Darjeeling Limited to Satyajit Ray, his latest tries to honor too broad of a subject. The resulting film is a breezy viewing experience—but also a shallow one.

Anderson’s recent work has been heavy on the whimsy, even for him. It’s understandable that he might want to explore lighter territory after his devastating magnum opus, 2014’s The Grand Budapest Hotel. In it, Anderson’s tricks captured the manicured grandeur of 1930s Europe—while also depicting the creep of prewar fascism; even his most beautiful gloss could do only so much to cover up despicable evil. Unfortunately, after that, Anderson turned to the animated stop-motion antics of Isle of Dogs, and now this confection, which depicts the politics of the past only in glances.

The filmmaker has called this movie a “love letter to journalists,” though I couldn’t help but also think of it as the wish list of a present-day blogger dreaming of the industry’s opulence of yore. The movie depicts the making of the final issue of The French Dispatch, a highfalutin insert to a Kansas daily rag, which was founded when the newspaper heir Arthur Howitzer Jr. (played by Bill Murray) traveled to the fictional city of Ennui-sur-Blasé in search of slower-paced journalism. A mash-up of the New Yorker luminaries Harold Ross and William Shawn, Howitzer is a soft-spoken yet unfailingly blunt boss who demands unique copy but gives his writers near-limitless indulgence to achieve it. His best bit of advice? “Try to make it sound like you wrote it that way on purpose.”

The line is characteristically pithy—and a surprisingly apt description of Anderson’s own work. Even when I don’t love his movies, I can’t imagine anyone else making them. Every detail is intentional and inimitable, even when it’s annoying. The French Dispatch, which is organized into short and forceful episodes, each depicting the writing of a fictional article, is a concentrated cocktail of this distinctive approach, a delicacy for diehards that might give on-the-fence viewers a headache.

My favorite chapter of The French Dispatch is the first. (I’m not counting the brief amuse-bouche starring Owen Wilson as a bicycle-riding essayist of the common man.) Inspired by The New Yorker’s six-part profile of the art dealer Lord Duveen, it follows the imprisoned murderer Moses Rosenthaler (Benicio del Toro) and the impassioned connoisseur (Adrien Brody) who discovers Moses’s artistic talent as an abstract muralist. The episode is a spot-on parody of both the torture of the creative process and the absurd ways that obsession with an artist’s personal narrative helps to commodify their work. Anderson places Tilda Swinton’s imperious reporter, J. K. L. Berensen, in the middle of the story, satirizing the magazine-writing process as well.

This sequence has the right mix of madcap fun, gentle satire, and earnestness, but the film’s other two chapters do not get the balance quite right. The second centers on a journalist (Frances McDormand) covering the 1968 Parisian student strikes who has a bored affair with one of the teenage activists (Timothée Chalamet). It’s a high-spirited tale, encompassing both an implausible romance and a fraught political moment, but in attempting to bottle such disparate subjects together, Anderson does neither justice. The third is the densest, casting Jeffrey Wright as a James Baldwin–like raconteur whose profile of a chef sparks a war in the criminal underworld. The episode includes a brief animated interlude, but by that time I had grown too tired of the unadulterated torrent of twee charm to really be engaged.

That’s both the delight and the drawback of The French Dispatch: It moves quickly but exhaustingly; if you’re tired of one trope, there’s always a new one waiting excitedly around the corner. Anderson is so hell-bent on cramming every frame with allusions, and squeezing a whole film’s worth of plotting into every chapter, that this 103-minute sprint ends up feeling like a marathon. Devotees of the filmmaker—and there are many—should emerge thrilled. But I’m hopeful that his next swing will actually pay attention to the subjects it chooses to cover.