When removing a statue actually is antidemocratic 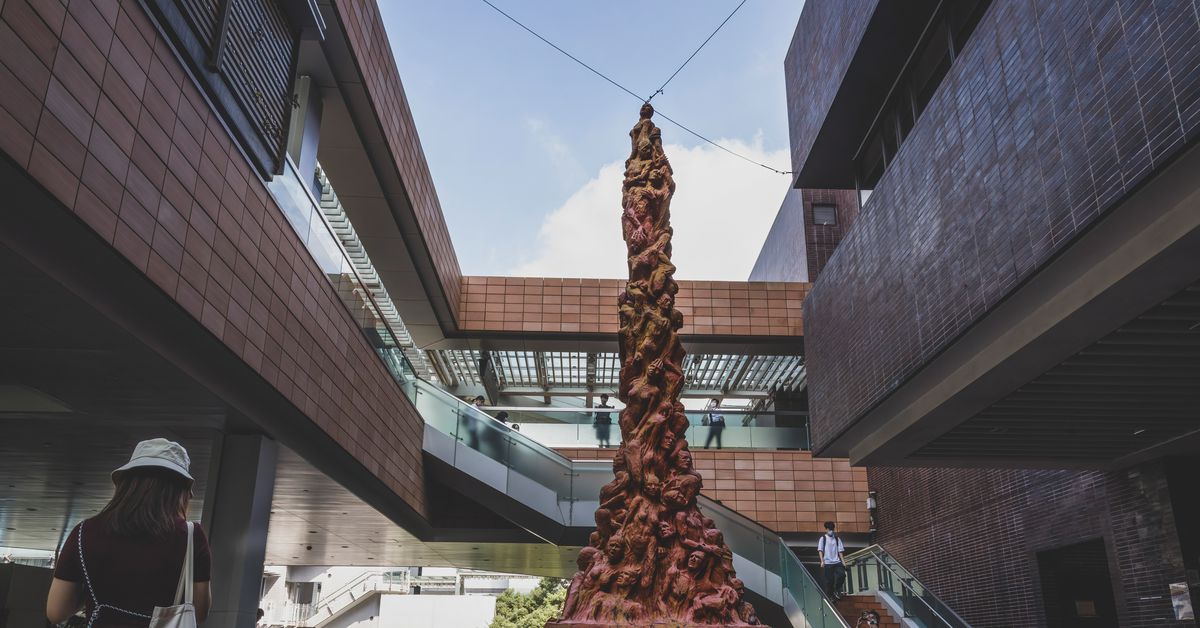 Each spring, activists in Hong Kong wash the “Pillar of Shame” as part of the city’s annual commemoration of the Tiananmen Square massacre. This coming year, there may not be anything left to cleanse.

The University of Hong Kong demanded the removal of the Pillar of Shame, a sculpture that memorializes the pro-democracy demonstrators killed in the Chinese government’s crackdown on June 4, 1989. The statue, created by Danish artist Jens Galschiøt, was installed on the campus nearly 25 years ago.

Now, the university has threatened to “deal with the Sculpture at such time and in such manner as it thinks fit without further notice,” according to a letter that the law firm representing the university, the US-based Mayer Brown, sent to the now-dissolved group in charge of the statue.

This is not just a small squabble over a sculpture, but another sign of the pressure Beijing is exerting over Hong Kong.

Hong Kong was one place in China where people could openly honor the victims of the Tiananmen Square massacre and continue the legacy of the student-led pro-democracy movement. In mainland China, especially among the younger generations, the history is practically erased from public consciousness.

This is what made Hong Kong’s Tiananmen Square commemorations so powerful. They are a direct challenge to Beijing, and why the Chinese government sees memorials like the Pillar of Shame as a threat. This is about trying to scrub the memories of not just Tiananmen Square but also the pro-democracy activism it continues to inspire. And it is an attempt for the Chinese Community Party to suppress resistance in Hong Kong and bring it closer and closer into Beijing’s orbit until there is little difference with mainland China.

The implementation of the sweeping national security law in 2020 has accelerated that process. In particular, the law — and pandemic restrictions, which banned mass gatherings — curtailed Hongkongers’ ability to honor Tiananmen Square, and has put at risk those who organize or participate in such efforts. The Hong Kong Alliance, the group to whom Galschiøt loaned the 26-foot pillar, disbanded in September after its members faced national security charges.

The deadline set for the sculpture’s removal passed, and the statue remains in place, for now, though for how long is unclear. (A typhoon also just walloped Hong Kong.) A spokesperson for the University of Hong Kong said in an emailed statement that HKU is “still seeking legal advice and working with related parties to handle the matter in a legal and reasonable manner.”

Galschiøt, the artist, has retained a lawyer; the sculpture still belongs to him. He told Vox that “for the moment, the next few days, it should be safe.”

The Pillar of Shame was first displayed in 1997 at the candlelight vigil in Hong Kong’s Victoria Park to commemorate Tiananmen Square. That was right before the 1997 handover, when Great Britain returned Hong Kong to China on July 1 under the promise that Hong Kong’s basic freedoms and rule of law would remain intact for 50 years.

Albert Ho, a former chair of the Hong Kong Alliance in Support of Patriotic Democratic Movements of China, which sponsored the statue and organized the annual Tiananmen Square candlelight vigil, told the Hong Kong Free Press in 2018 that they wanted the statue shipped to Hong Kong when it was still under British rule. “At that time, we had good reason to believe that this statue would not be allowed to enter after the transition,” he told the outlet.

After the vigil, students themselves hauled it to the HKU campus, where student protesters faced off with police, according to news reports from the time. The students succeeded in bringing the statue onto the campus, but the Hong Kong Alliance and supporters of the sculpture struggled to find a permanent place to display it.

The Pillar of Shame had become an extension of some of the anxiety around Hong Kong’s future under Beijing’s rule, and about the city-state’s basic freedoms. “In Hong Kong it fanned a heated debate about the limits of free speech,” Galschiøt reflected on his website.

After being featured at a bunch of universities, the statue was ultimately installed at the University of Hong Kong in 1998. In 2008, the statue was painted orange to bring attention to the Chinese government’s human rights abuses ahead of the Beijing Summer Olympics.

The statue remained part of the annual commemorations of the Tiananmen Square massacre, with volunteers and activists washing the statue and often laying flowers at its base. It was a minor event compared to the candlelight vigil in Victoria Park, which tens of thousands attended each year. Perry Link, an expert in Chinese literature and culture at the University of California Riverside, who serves on the academic committee of the online Tiananmen Square museum, said that Hong Kong’s commemorations stood out.

“No city anywhere in the world has been nearly as attentive and articulate in its aim to remember that massacre and to learn the lessons of it,” he said.

Until, at least, Beijing began its crackdown.

In 2019, on the 30th anniversary of the Tiananmen Square massacre, hundreds of thousands of Hongkongers attended a candlelight vigil in Victoria Park just as the city was about to erupt in massive protests against a controversial extradition bill that would have expanded Beijing’s control over the city.

But as this was happening, Beijing prepared to impose a sweeping national security law, the culmination of its crackdown on Hong Kong’s pro-democracy movement.

The sweeping law targets the crimes of secession, subversion, colluding with foreign powers, and terrorism, all of which are vague and broadly defined and can carry harsh penalties. Simple acts of protest or brandishing pro-democracy slogans could lead to charges of inciting succession. Since the law was enacted in June 2020, more than 150 people have been arrested under it, including pro-democracy legislators, activists, journalists, and academics, among others. One person has been convicted so far.

It has made the Tiananmen Square vigil all but impossible to hold. In June 2021, Hong Kong authorities again denied the group a permit to meet and closed Victoria Park. Activists still tried to honor the occasion, encouraging people to “mourn in their own way” and light candles wherever they where. On June 4, the day of the commemoration, Hong Kong authorities arrested one of the organizers of the vigil for promoting unauthorized assembly. Since then, she and three other members of the Hong Kong Alliance were arrested under the national security law, and the group was accused of being “an agent of foreign forces.” In September, the group dissolved for good. (The order sent by Mayer Brown was directed to the Hong Kong Alliance and its former leaders, which added to the confusion.)

HKU’s decision to remove the Pillar of Shame has predictably attracted more attention to the iconic sculpture. Students and tourists are snapping photos of it before it is hauled away or destroyed. pic.twitter.com/Bsw5zzTGfo

But it also showed, once again, the extreme chilling effect of the national security law. A longstanding piece of artwork can be framed as a potential challenge. “Beijing has decided to take over the city, to crack down on it, and to label anything that is anti-Beijing as subversive or, worse, terrorist,” Link said.

He added that even though the charges are ridiculous, it remains “a club that Beijing can use. “And the people in Hong Kong, don’t dare to stand up and say, ‘Wait, this is ridiculous’ in public, because then they’ll be the next ones to be clubbed.”

Galschiøt told Vox the university’s decision to remove his sculpture is also troubling, as an intellectual institution should care about the story of Tiananmen Square and “the intellectual right to talk about what happened in the story, and this is the thing Hong Kong is destroying now.”

It fits with a broader unraveling of academic freedoms in Hong Kong. Student leaders have been arrested under the national security law, and university student unions have also dissolved under the pressure; HKU cut ties with its student union in July. Professors are concerned they could be terminated or lose tenure for their political opinions, which could run afoul of the law.

Even if the Pillar of Shame stands for now, it looks to be a temporary reprieve. Galschiøt expects to display the statue elsewhere, and there are sister installations of the Pillar of Shame in Mexico, Brazil, and Denmark. If it can’t stay in Hong Kong, he hopes, at some point, it ends up back there again.