'You Know, Joe Manchin’s Right: You Actually Can Get a Lot for $1.5 Trillion' 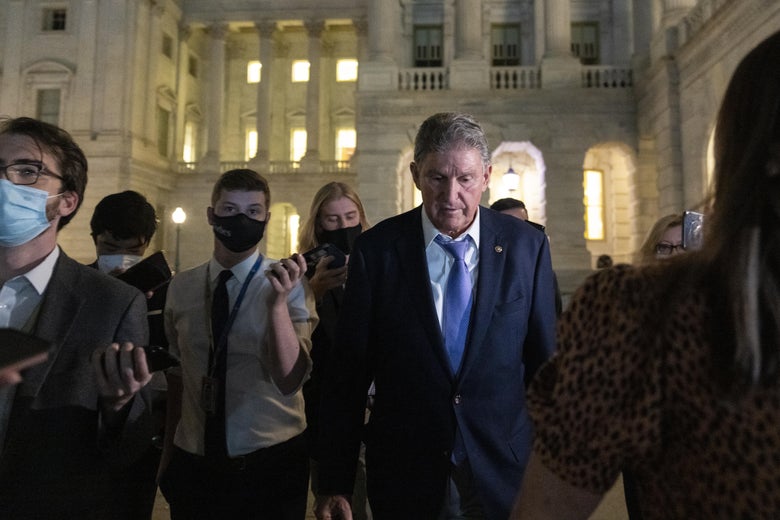 Progressives are in the bargaining stage of legislative grief as Democrats desperately try to strike a deal within their party to move on President Joe Biden’s agenda. As negotiations have worn on this week, it’s become increasingly clear that the price of the $3.5 trillion social-spending and climate package that left-leaning members prioritize will have to shrink significantly. How much? Sen. Joe Manchin of West Virginia, without whom the bill cannot pass, says he wants a cost of no more than $1.5 trillion. Leadership has tried to nudge him up to $2.1 trillion, but with little success so far.

“I’m still on $1.5 [trillion] guys, I’ve been on 1.5 and I’m going to make sure that people understand there’s an awful lot of good,” Manchin said Thursday night. “We can help a lot of people, children on the front end, seniors on the back end, a lot of good things.”

And you know what? Manchin’s not totally wrong. Personally, I think his ceiling on spending is unjustified and silly. But it is in fact possible to do a lot of good with $1.5 trillion over a decade—you could fill a few gaping holes in our welfare state, continue the fight against child poverty, bring popular new Medicare benefits to seniors, dramatically reduce carbon emissions, and more. It just requires being a bit cost-conscious on each program. You wouldn’t be able to pass anybody’s dream program, but it would be actual progress.

For illustrative purposes, I priced out a bill that’s roughly $1.5 trillion based on cost estimates from various sources (unfortunately, not everything has an official score from the Congressional Budget Office yet, so it’s possible some of these line items are low-balls). To be transparent, I don’t think there’s much chance this specific package would pass, for various political reasons. But it’s meant to show how far the money could, in theory, stretch. Here’s the basic outline of what a reconciliation bill on a Manchin-sized budget could look like, with some of the numbers rounded up slightly.

You could pair these proposals with a program to finally let Medicare negotiate prescription drug prices—albeit, a watered-down version one that doesn’t offend the Senate moderates who’ve been resisting the idea—and get a pretty decent bill full of popular stuff. Let’s go through exactly what each of these line items buys you.

For many progressives, climate spending is the No. 1 priority in this bill. At the moment, Democrats have proposed a bit over $617 billion to reduce our carbon emissions and deal with other environmental issues, like lead pipe removal. But you can still make big strides on eliminating C02 while spending a bit less. Earlier this month, analysts at the Rhodium Group projected that the policies Democrats had put forth would reduce total U.S. carbon emissions by up to 936 million tons a year in 2030—which would essentially be like zeroing out C02 from Texas and Florida today, or all the light-duty cars and trucks on the road.

Most of the emissions declines in their analysis—715 million tons worth—came from just three programs aimed at decarbonizing the electricity sector: Clean-energy tax credits, money for rural electric cooperatives, and the Clean Energy Performance Program, which incentivizes utilities to move toward zero-carbon sources of power. Based on committee and White House budget estimates, those three programs combined are probably around $435 billion. A fee on methane pollution Democrats have proposed would reduce emissions further without adding to the cost.

Again, it’s not clear a plan along these lines would actually survive, or be the best possible option. Manchin, a fossil-fuel defender, has been extremely critical of the Clean Energy Performance Program (shocking, I know), and many expect the program’s ambition to be pared back, if it isn’t junked entirely. Meanwhile, some key Democrats are talking about a carbon tax that excludes gasoline, which could maybe offer more carbon bang for the buck. The point is that you could, potentially, do a lot with the resources, if deployed smartly.

The fact that the United States is the only developed country in the world without any paid leave for new parents should be a constant source of shame for Americans. Only about 19 percent of workers are covered by a paid leave program through their job, and while nine states and Washington, D.C., have implemented a program of their own, two-thirds of workers live elsewhere. Democrats would like to fix this situation, but on its face, their solution looks expensive. It’s essentially a more generous version of the FAMILY Act, which offers Americans up to 12 weeks of paid family and sick leave at a cost of $547 billion, according to its last CBO score.

But here’s the thing: As Matt Bruenig of the People’s Policy Project notes, only about 30 percent of the FAMILY Act’s cost comes from leave for new parents. Most of the rest covers time off for Americans with serious illnesses or who have to care for sick family. All three kinds of leave are extremely important—hit me up on Twitter, and I’ll tell you some painful family stories about just how cruel American businesses can be to their sick employees—but if they’re economizing, Democrats could in theory stick to parental leave, and fill one of the most glaring gaps in our welfare state for roughly around $164 billion.

Right now, Americans enrolled in the traditional Medicare program don’t get dental, hearing, or vision benefits. Sen. Bernie Sanders would like to fix that. It’s an incredibly popular idea, but the way they’re currently designed, the programs are extremely expensive. Worst, to hold down the short-term cost somewhat, the dental coverage doesn’t kick in until 2028. However, Matthew Fielder at the USC-Brookings Schaeffer Initiative for Health Policy has outlined a plan to shave down the expense by 64 percent; it involves charging a standard premium for the coverage like the rest of Medicare Part B, and making technical tweaks to how Medicare Advantage plans are compensated. The Committee for a Responsible Federal Budget tells me that, with those changes, you could do the expansion for about $200 billion and start benefits in 2024, just in time for Joe Biden to court the senior vote.

The Democrats’ coronavirus relief bill temporarily fixed the Affordable Care Act’s most critical flaw, by extending insurance subsidies to Americans who make more than 400 percent of the poverty line (before, a lot of middle-income families were essentially priced out of the ACA’s exchanges). Obviously, those changes should be made permanent. Democrats also need to figure out how to provide insurance coverage to low-income households who live in states that refused to expand Medicaid. The Commonwealth Fund has suggested that Congress could make the insurance subsidy expansion permanent, and plug the coverage gap in refusnik states by offering their residents 0 premium private coverage on Obamacare’s exchanges, all for about $330 billion. Doing so would reduce the uninsured rate, compared to the pre-COVID relief bill status quo, by almost 7 million people, or 24 percent. There may be other equally affordable ways to go about it with a federalized Medicaid expansion, there should be affordable ways to make the Affordable Care Act live up to its name.

I’m not going to belabor this bit. Expanding pre-K is good for low-income children’s learning and development. It will also help with America’s woeful childcare situation. And it doesn’t cost much. According to the White House’s most recent budget, offering grants to states for universal pre-K programs should cost about $140 billion.

A Child Tax Credit Joe Manchin Can Live With

And this one is painful. Joe Biden’s Child Tax Credit expansion has been one of the administration’s signal achievements. Democrats transformed the benefit into a monthly payment available to even the poorest families, including ones in which the parents aren’t working. It was projected to cut child poverty by almost half. The problem? Extending the program permanently is extremely expensive—pushing it just to 2025 costs somewhere around $550 billion—and Manchin has signaled he wants to bring back work requirements for the program and more strictly limit benefits for higher earners. “I cannot accept our economy or basically our society moving toward an entitlement mentality,” Manchin said this week. “Because I’m more of a rewarding ― because I can help those who really need help if those who can help themselves do so.”

Maybe someone will convince Manchin to back down. But in the meantime, I tried to beam myself into his brain and imagine a version of the program he’d accept, then asked the Jain Family Institute to model it for me. It has a work requirement, but phases in quickly—parents get $1 of benefits for each $1 of earned income until they hit the max—and starts winding down for couples who make more than $70,000 a year, compared to $150,000 for this year’s version. Their analysts found that it would still reduce poverty by 20 percent compared to the status quo before the coronavirus relief bill, and cost about $240 billion to extend until 2025. It’s not ideal, but it would do good.

Again, the point of this exercise is not to write out a specific bill that could definitely pass, but just to show that $1.5 trillion might be able to go pretty far toward fixing major shortcomings of the American welfare state while also combatting climate change. But it would require Democrats to be strategic in their spending, which would mean not wasting money on things like, say, spending $380 billion to eliminate the cap on state and local tax deductions, a priority for New Jersey Democrats that would largely benefit the rich (you can probably double the cap for a relatively modest $75 billion as a compromise). Manchin’s probably correct that you can accomplish a lot within the budget he’s laid out, as disappointing as that would be for the left. Now, whether his party is capable of actually doing so—or whether he’ll even give it a chance on issues like climate—is another question.